The citrus and fennel salad is one of a number of options on Helen in the Heights' new brunch menu.
Photo by Shannon O'Hara.

From the classy to the crazy, this week’s News Bites shows just how diverse the Bayou City food scene really is. Kenny & Ziggy’s melds Jewish and Tex-Mex traditions for a truly only-in-Houston Hanukkah offering, Tilman Fertitta opens the doors on a steakhouse in one of Houston’s most upscale neighborhoods, Izakaya hosts an Ugly Sweater Brunch—and, oh yeah, the River Oaks District is getting a much-needed coffee spot, at least for now. In other words, it’s just another week in Houston food paradise.

Also, a top French restaurant in downtown Houston is offering a festive deal exclusively to our readers.

Toast your own good taste in being a Houston Food Finder reader. Artisans at 3201 Louisiana is offering our readers a bottle of Champagne for $30 from now through December 30. This sweet deal isn’t available on Christmas Eve, must be consumed at the restaurant and isn’t offered for private parties. All other times this holiday season, stop in, say you read Houston Food Finder and drink up.

Emmaline, 3210 West Dallas: The former Teala’s was reborn this week as an American restaurant with European flair. Owner Sam Governale and Executive Chef brought in Ashley Putman, a Louisiana native whose career in design took root at the corporate offices of Barneys New York, as Emmaline’s creative director. The spacious main restaurant sports a 50-seat sunroom and Governale expects the space to be a come-as-you-are spot, whether for drinks after work, a kicked-up casual dinner out, or dropping in before or after an event.  Menu highlights include seared fresh sea scallops with grilled zucchini and flower, sorrel and crispy black rice; wood-roasted pork chop with fennel “apple sauce” and glazed root vegetables; and stuffed peppers with smoked farro, other ancient grains, currants and pine nuts.

Mastro’s Steakhouse, 1600 Post Oak: Restaurant giant Landry’s unveiled the latest gem in Tilman Fertitta’s ever-growing empire in The Post Oak Hotel on December 8. “I have always wanted to open Mastro’s one-of-a-kind, masterful, high-end dining experience in my hometown,” said Tilman Fertitta via a press release. “Mastro’s will be the first restaurant to open at The Post Oak, with the remainder of the luxury destination development slated to open in early 2018.”

BCK: Kitchen and Cocktail Adventures, 933 Studewood: Slated to open in January, this companion to Bosscat Kitchen in River Oaks previewed its experience with a pop-up for last weekend’s Lights in the Heights. Beginning December 14, BCK is available for private bookings for those who fancy an exclusive preview before it opens to the general public.

El Tiempo, 20237 Gulf Freeway: The wildly popular Mexican restaurant opens its doors in Webster later this week— on December 14, to be exact. It’s the eighth location for the homegrown chain, best known for sizzling fajitas and grilled seafood.

Jewish Tradition Gets A Tex-Mex Spin

Kenny & Ziggy’s, 5172 Buffalo Speedway and 2327 Post Oak: What do you get when you cross a traditional Jewish dish with a Tex-Mex twist? Meet Ziggy Gruber’s creation, The Enchilatke. The spicy dish consists of three potato pancakes (latkes) topped with cheddar cheese-stuffed jalapeños, sour cream and pico de gallo. It comes with lime slices and sells for $15.95. Get yours from sundown December 12 through nightfall on December 20.

Visitors to the River Oaks District who have despaired over the lack of good java will love this news. Cavo has opened a pop-up coffee stand in the upscale shopping center to give holiday shoppers a much-needed jolt. Located across from Hopdoddy, it’ll serve a selection of baked goods from Cavo’s main location on Richmond, as well as coffee, espresso drinks and teas.

Tacodeli, 1902 Washington: Get ready to have your mornings be a whole lot better. Tacodeli launches its first-ever breakfast Special of the Moment, the El Toro. It’s made with Akaushi beef belly bacon from Heartbrand, locally smoked at the New Braunfels Smokehouse, and served on a bed of refried beans with caramelized onions. Then, it’s topped with salsa de árbol and chevre cheese from Cleveland, Texas.

Helen in the Heights, 1111 Studewood: Brunch in the Heights got a shot of Greek, as Helen launched brunch service on December 9. On the menu: a Kataifi Benedict of crispy phyllo nests, avgolemono hollandaise and Greek pico de gallo as well as Lamb Steak & Eggs made with with 30-day, wet-aged, grass fed, free-range Australian leg of lamb, lemon potatoes and a poached egg. It’s all available from 11 a.m. to 3 p.m. on Saturdays and Sundays.

Helen Greek Food and Wine, 2429 Rice Blvd: As its sister restaurant rolls out brunch, the original Helen is continuing to run its Wine Bar Nights through the holidays on Mondays when the restaurant is normally closed. Take a break from Christmas shopping, or stop in after work, for a selection of Greek wines and light bites. It’s the perfect calm in a storm of holiday chaos. Bonus: buy retail bottles and make your own three-bottle wine gift basket if you’re looking for something original for someone on your list.

Something For The Kids?

Balls Out Burger, 1603 North Durham: The burger joint has a new kid’s meal deal: a burger with any fries and choice of soda or kid’s-size milkshake is $7.50. It’s available during all hours of operation. How you choose to explain the name is up to you.

Bring a French Tradition to Your Holiday Table

Bistro Provence, 13616 Memorial Drive: Owner Genevieve Guy is making traditional Bûche de Noel (aka the Yule Log) to give your Christmas a little French flair. Opt for Bûche au chocolat or mousse framboise (chocolate génoise filled with raspberry mousse). The six inch ($33) serves 6 to 8 people; the 10-inch ($49) serves 10 to 12. Orders must be placed by Thursday, December 21, for pick-up no later than Saturday, Dec. 23. Call (713) 827-8008 for details and to order.

Cane Rosso, 1835 North Shepherd and 4306 Yoakum: Fans planning to head out on opening weekend to watch Star Wars: The Last Jedi might want to preface the epic movie experience with themed dishes at these Neopolitan-style pizza restaurants which will also be playing the previous Star Wars movies. The special pizzas include the C-3PO, which stands for three cheeses (mozzarella, provolone and goat cheese (C), pepperoni (P) and oregano (O). Cocktail specials include Red 5 with Deep Eddy Ruby Red Vodka, Aperol, simple syrup and lime juice as well as Cloud City with Old Forester Bourbon, Rothman & Winter pear liqueur, Aliseo blood orange juice, lemon juice and simple syrup. Beer lovers can enjoy Noble Rey Brewing Company’s “Yub Nub.” The specials are available to enjoy through December 17 and those who show up in a Star Wars costume will get half off their pizza.

It’s National Cupcake Day and all three Ooh La La locations are celebrating with buy one, get one free cupcakes. It’s the perfect opportunity to try the featured Cupcake of the Month: Banoffee Pie, with banana cake filled with house dulce de leche, topped with toffee buttercream and a toffee crumble. (Limit one free cupcake with purchase per person.)

Izakaya, 318 Gray: Break out your tackiest Christmas sweater and turn up for the Ugly Sweater Brunch. Service begins at 11 a.m. From from 1 to 5 p.m., there are a host of sweater-related fun and games, including a judging on the ugliest mound of knitting. Deejay FXBOXolmos will spin tunes and there is a specially priced brunch menu.

The Four Seasons Hotel, 1300 Lamar: From 12 to 4 p.m., pop in for a special children’s-themed Gingerbread tea. Christmas carolers, arts, crafts, cupcakes and gingerbread houses are part of the offerings. The cost is $45 for children and $64 for adults.

Backstreet Cafe, 1103 Shepherd: Santa Claus is coming to town, and he’ll be available for photo ops with kids and adults alike. It’s all part of a special holiday meal on offer from 5 to 9 p.m. While the kiddos will love the man in the red suit and the Christmas carolers, adults will dig Backstreet’s Happy Hour pricing on grown-up libations.

Arnaldo Richard’s Pico’s, 3601 Kirby: The regional Mexican favorite is celebrating 12 Days of Mole this week with a different mole dish featured each day. Sunday, December 17 marks the culmination of it all: a Massive Mole and Tamale Brunch Buffet, serving every mole from the 12-day feast. 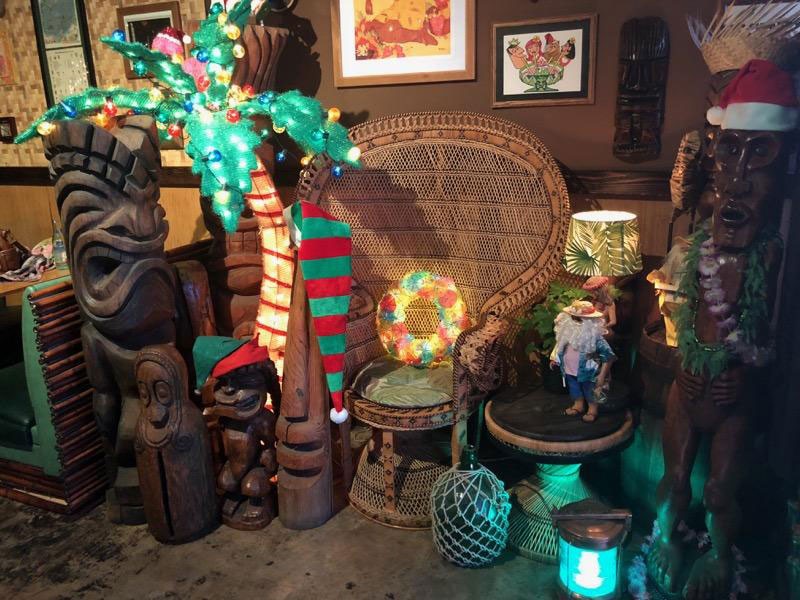 Lei Low, 6412 North Main: Put some tiki in your holiday with Lei Low’s annual Christmas bash, beginning when the doors open at 2 p.m. There’s a Wheel of Destiny to can spin for cool prizes and drinks and the place will be rocking with holiday tunes in the afternoon. At 7 p.m. The Royal Phantoms will play surf rock. Bonus: if you’re wearing aloha or holiday wear, there are drink specials for you.