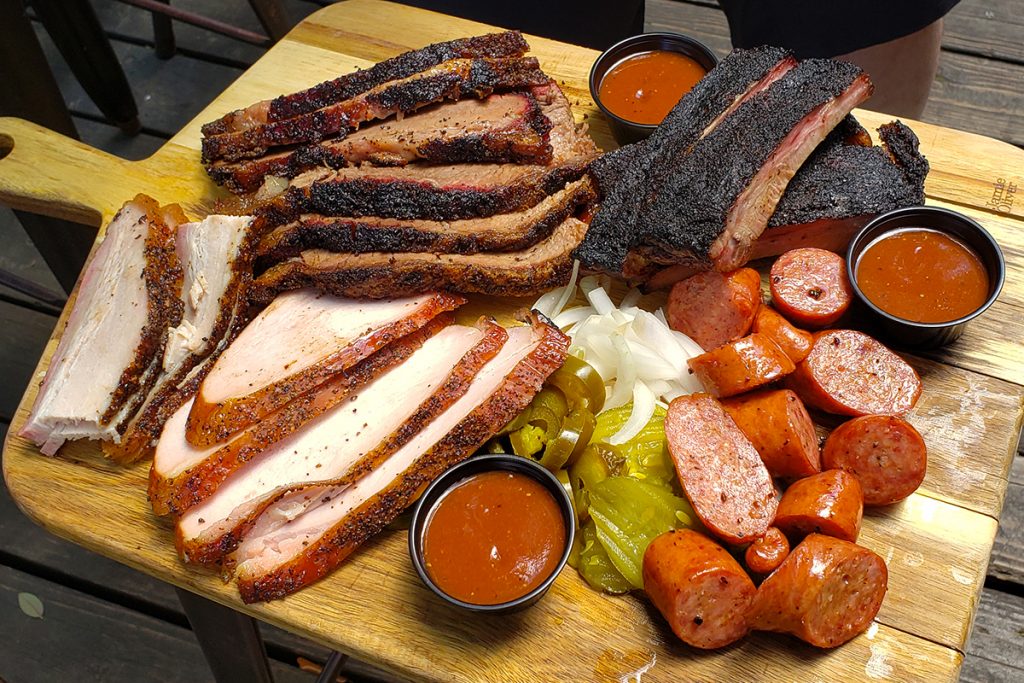 A sumptuous tray of meats at Buck's Barbeque. Photo by Scott Sandlin.

Buck’s Barbeque Co., owned by Jim Buchanan, is a regular feature at Lucky’s Lodge at 2024 Rusk just east of downtown Houston. While it’s been convenient to have a presence near Houston’s central business district, Buchanan says he’s long dreamed of opening his very own barbecue restaurant and has been searching for a suitable space. He’s now found one — and it’s in Galveston. Beginning June 1, Buchanan is taking over the day-to-day operations at Farley Girls Cafe at 801 Postoffice Street, near the campus of UTMB Galveston. The final day of service for Buck’s Barbeque at Lucky’s Lodge is Saturday, May 11.

Buchanan discovered an intent to sell by the Farley Girls owners and says he quickly recognized that this would be a good fit for Buck’s Barbeque. Buchanan is initially leasing the space, with the goal of eventually purchasing the property in the future.

While the business at Lucky’s Lodge has been acceptable, it tends to fluctuate wildly depending on scheduled sporting events in the area, activities at the George R. Brown Convention Center, and even the weather. Kitchen space and storage is limited, which affects the extent of the menu and amount of food that Buck’s is able to produce. The Farley Girls Cafe operation already has established weekday lunch clientele thanks to nearby UTMB, plus a bustling weekend brunch service that gets traffic from both visitors and island residents.

Buchanan is not only maintaining these daily operating hours but also adding a dinner service Thursday through Saturday evenings. “After lunch service ends at 3 p.m., we’ll close, reset the kitchen, and open for dinner service at 5 p.m.” Buchanan says. He’ll also offer a “to-go” family meal package, ideal for UTMB employees leaving work at the end of the day. “People will be able to place an order online for meats and sides. We’ll package their order-to-go meal and all they have to do is swing by and pick it up.There’s already an online order portal on the website that’s working fantastic,” Buchanan explained.

He also wants to implement a grab-and-go system with a few popular selections, plus add some value menu items at a lower price that are affordable for UTMB students. Catering is a significant part of the Farley Girls’ business and Buchanan intends on keeping that part of the business active as well.

The Farley Girls Cafe menu is expansive and described as as “A Little Bit of Everything” with selections ranging from comfort food hot entrées to pizzas, burgers and sandwiches and salads. Buchanan says he’ll retain most of the familiar menu for the foreseeable future and simply add on his traditional Texas barbecue. He is also looking for ways to integrate his smoked meat components into some the existing dishes. Some examples might include kicking up the existing French Dip sandwich with smoked sirloin and adding smoked brisket or pork belly to brunch biscuit sandwiches. Farley Girls has a popular “Mile High Meatloaf” on its daily menu, but Buchanan can take it up a notch with his amazing bacon-wrapped and smoked meatloaf. Since pizzas are already on the menu, Buchanan’s smoked brisket and bleu cheese flatbread is likely to find a regular home at the brick-and-mortar as well.

“Six months down the road, we’ll start to transition to more of a Buck’s Barbeque-branded operation and menu, and I hope to add a liquor license within six months so drinks and spirits are available with the dinner service,” Buchanan says. “We’ll do steaks, smoked prime rib, those kinds of things. And 10 to 12 months down the road, the Farley Girls name will go away completely, and it will be all Buck’s Barbeque, all the time.”

Houston barbecue’s loss is certainly Galveston Island’s gain. Quality barbecue options on the island are limited, and with Buck’s making the move, Galveston will be able to boast of having one of the only Texas Monthly-rated 4-out-of-5 stars (or better) barbecue establishments south of Houston.

Houston has been Buchanan’s home for a long time and his passion for barbecue was born in The Bayou City. Making the transition to “Island Time” will certainly be different, with the pace of life on the Island being so laid-back and much less hectic. Buchanan is excited about his new-found opportunity as a newly-minted IBC (Islander By Choice) and the prospects the future holds. After setbacks on his previous startup due to Hurricane Harvey, which completely flooded his original plans to open at Lucky’s Pub in The Heights (to the point where it never reopened), he says the chips are starting to fall into place.

Taking over such a highly regarded establishment as Farley Girls Cafe is likely to be hard work, but at least he doesn’t have to start from scratch. His dreams of having a place of his own are finally becoming reality.

Houston Food Finder20 hours ago
ICYMI: Interested in traveling the world in your search for the perfect dish? Phaedra Cook has the scoop on Houston Chef Johann Schuster, former chef/owner of Charivari, and his big plans for tasting international cuisine.
#houstonchefs #houstoneats #houstonfoodfinder #houstonadventures

Houston Food Finder with Roma Ristorante.21 hours ago
As always, Roma Ristorante is participating in Houston Restaurant Weeks 2021! Journey to Italy with a three-course dinner for $35 per person. Three dollars from each goes to the Houston Food Bank. Selections include vegetarian and gluten-free dishes. Choose from starters such as creamy Imported Buffalo Mozzarella With Housemade Pesto And Mixed Greens, crispy Fried Shrimp And Calamari With Marinara And Artichoke Sauce and hearty Meatballs With Cheese And Basil. The second course includes pasta options like spicy Orecchiette With Housemade Italian Sausage (a specialty of Chef Scarafile) and Strozzapreti with Fresh Shrimp and Housemade Pesto. Entrées include earthy Eggplant Parmigiana, Chicken Breast Stuffed With Prosciutto And Grana Padano and decadent Veal Scaloppine. Pair your meal with a selection from our extensively curated wine list. Reservations are encouraged but not required. Visit the https://romahouston.com/ for the full menu, or call (713) 664-7581 for more information.