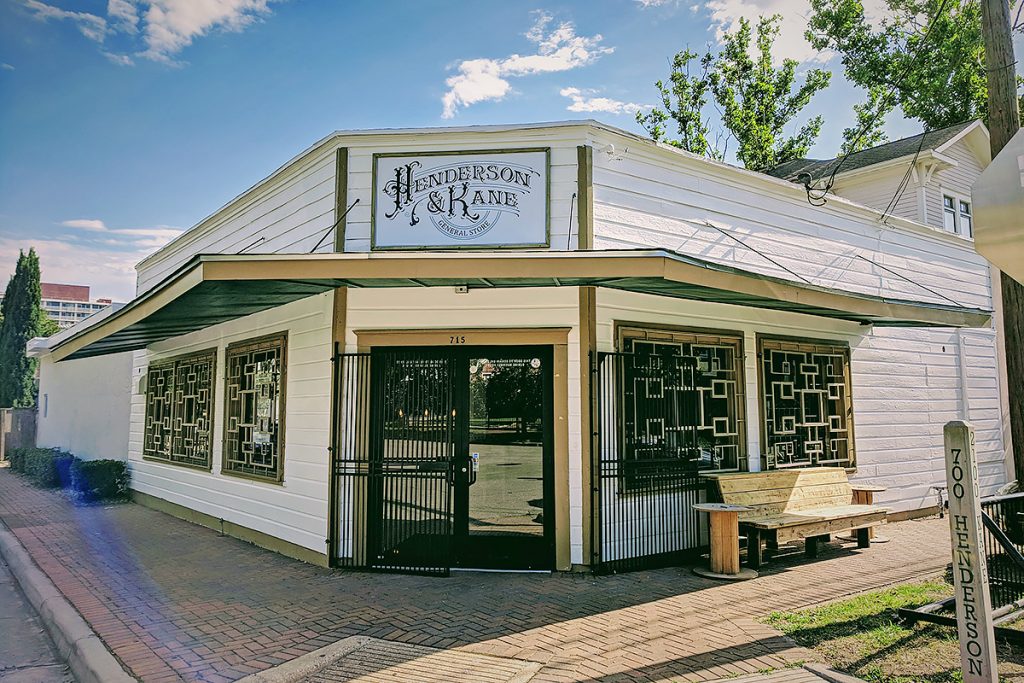 John and Veronica Avila, owners of El Burro & the Bull inside the Conservatory food hall in downtown Houston, say their new business Henderson & Kane General Store is now in its soft-opening phase. It’s located at 715 Henderson in the Sixth Ward just west of the theater district. The historic building is a former 1930s-era mercantile that started life as Scardino’s Food Shop. As time went on, it housed several other stores, including DeStefano’s Grocery, Garcia’s Meat Market, Roosevelt Riley and, most recently, Henderson Market which closed in 2011.

According to a press release, the offerings include “house-smoked meats, hand-cranked sausage, fresh baked pastries daily, coffee [and an] espresso bar.” Henderson & Kane’s grand opening celebration is on July 4 and features a full barbecue menu, hot dogs and snacks. Specials on wine and growlers start at 11 a.m. The Avilas say that the Sixth Ward location is going to have a great view of the annual fireworks show at Eleanor Tinsley Park.

The aim is for Henderson & Kane to be a neighborhood bodega like the ones patronized by the Avilas when John was a pitmaster at Morgan’s Brooklyn Barbecue in New York. In keeping with that idea, service starts with breakfast. The menu includes a roasted cherry tomato, basil, garlic and goat cheese quiche made with locally-sourced Gramen Farms organic eggs. There’s also a selection of freshly baked croissants and dessert tarts. In addition, there’s a selection of house-smoked and cured meats good for any time of day. These include smoked salmon, charcuterie and meats that are already being served at El Burro & the Bull: prime Angus brisket, smoked pork shoulder, wild turkey breast, housemade sausages and boudin. The selections are ideal for preparing an easy meal at home.

On the shelves and in the cooler are many local and Texas-sourced products. These include Gramen Farm’s low-temperature pasteurized milk, non-gmo, non-soy fresh farm eggs, prepared raw and vegan dishes from Pat Greer’s, kombucha from Bayou City Bucha, blueberries from Bleakwood Farms in East Texas and a variety of herbs and spices from Granel Global. Shoppers can also sign up for a weekly co-op share of produce from Loam Agronomics or pick up fruits and vegetables a la carte.

The beverage director, Jeremy Masters, is leveraging his previous experience from his work at Southside Espresso, Siphon in Montrose and Pondicheri in Upper Kirby District. He’s in charge of the coffee program and is using locally roasted Fusion Beans from one of those former employers, Southside Espresso. He’s also making his own syrups for crafting espresso drinks.

The general manager is Monse Lozano, is a retired NASA engineer with a professional science and engineering background. (Interestingly, he once helped create an opera powered by “sonic bicycles.”) According to Veronica Avila, his role with Henderson & Kane is on the financial and operations side.

As Henderson & Kane rolls out of the soft opening phase and gets more into day-to-day business, additional items will become available as well as some that are appearing as weekly specials. These include grass-fed, grain-finished beef, organic pork from Red Waddle heritage breed pigs, beef bone broth and smoked beef tallow.

“We look forward to serving our handcrafted small batch products, whether that is taking home dinner for the family, meal preparing for the week or just your everyday conveniences,” said Veronica Avila via press release.”