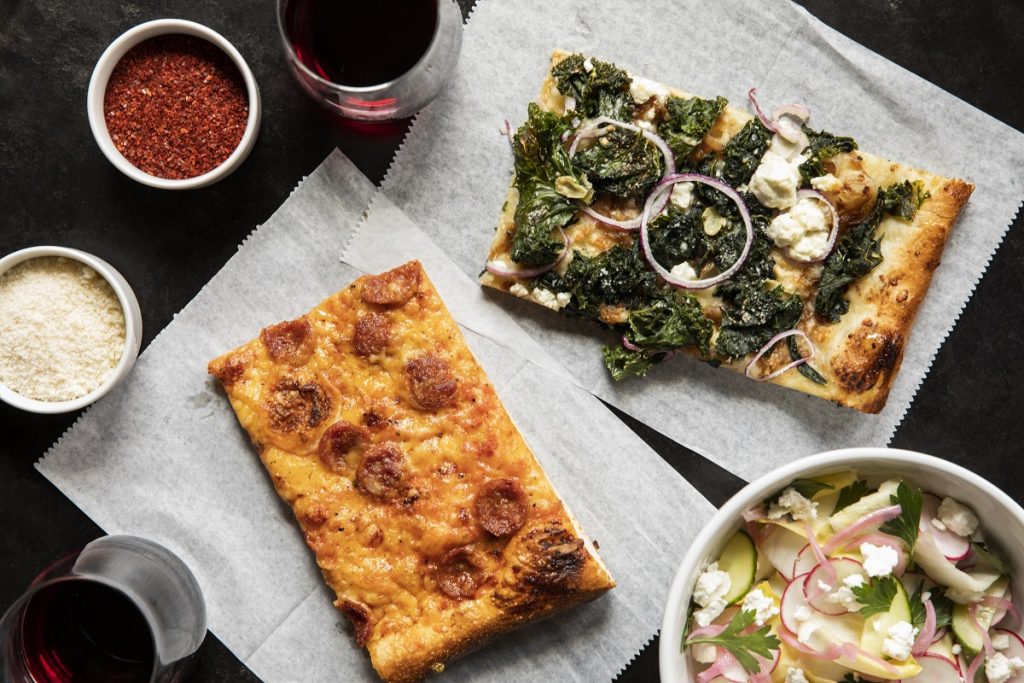 While opening three places concurrently is enough to make any proprietor’s head spin, Agricole Hospitality partner Morgan Weber is taking it in stride. “Well, it sounded like a great idea on paper,” he joked. “No, actually, we’ve been planning this for the last two years, and we’ve got this incredible, eager and talented staff. We’re ready. In fact, the Vinny’s opening was the smoothest we’ve ever had.”

While the company already makes pizza at Colitvare, diners are going to discover that the ones at Vinny’s are a totally different style. For starters, the dough proportions are different, resulting in a different flavor and texture. Most notably, the pizzas at Vinny’s are rectangular and monster-sized: a whole pie is a whopping 52 ounces. Don’t worry about the size, though: Vinny’s also sells it by the slice.

Weber says that’s he result of him and partners Ryan Pera and Vincent Huynh traveling the country sampling pizzas. They came to an unexpected conclusion. “We liked the rectangle shape,” said Weber about Vinny’s now signature pizza look. “We loved the way it sliced, the way the way it cooked. And we took the slices, then multiplied it by 10 to come up with how many ounces the whole pie would be. And yeah, it’s a huge pie! We do a half size, too.”

The sauce is from canned San Marzanno tomatoes along with Parmesan cheese, fresh herbs, olive oil and garlic. It’s blended cold and not cooked prior to baking the pizza to preserve the tomato flavor. For cheese, Vinny’s uses a combination of Wisconsin Brick (so called because the cheese curds are pressed with clay-fired bricks) and Parmesan cheeses on most of the pies. Others use provolone, smoked cheddar or just the Wisconsin Brick. The flavor is strong and ripe, and the soft texture melts similarly to mozzarella.

For meats, the chorizo and Italian sausages are made in-house. Huynh and chef Paul Lewis developed the pepperoni recipe and The Fatback Project in Alabama produces it. Once assembled, the pizzas are cooked in a Woodstone stone hearth oven that burns both wood and gas and has more than 25 square feet of cooking space.

Over at Indianola, the focus is on American immigrant cuisine. The partners drew on their own heritages as a starting point. Huyhn’s family arrived in San Francisco from Asia, Pera’s were Italians who immigrated to Ellis Island and Weber says his Czech and German forebears came to Texas via the Indianola port from which the restaurant takes its name.

“We were talking about the food and the traditions immigrants brought with them,” said Weber. “And as we were conceptualizing the menu, we realized that all of these traditional dishes from other places had taken on a decidedly American spin.” The partners and Lewis — who’s from England — wanted to find a way to represent that on the plate. They were also keenly aware that they wanted to make dishes that would resonate in the EaDo neighborhood.

“The American yet worldly approach of Indianola allows us to embrace the different cultures that exist in the United States which gives us a certain amount of freedom as chefs,” said Lewis in a press release announcing the openings. Weber said they’re still finalizing the menu, but guests can expect a broad range. Breakfast dishes include shakshukah, poached eggs with tomato, feta and onion that hails from North Africa with a decidedly Mediterranean flair; Chinese rice porridge (also known as congee) and huevos rancheros. Lunch is a selection of soups, salads and sandwiches, plus larger plates like ricotta gnudi and Ruby Trout with salsa Veracruz. Also expect items like som tum, a spicy Thai salad made with green papaya, wood-grilled Santa Maria steak with tomatillo escabeche for dinner and Basque cheesecake for dessert.

“We tasted through 300 dishes while coming up with the menu over the last two years,” said Weber. “I think people are going to find some unexpected gems.”

Miss Carousel is a 5,000-square-foot bar the owners say was designed to be comfortable yet refined. The staff here makes all of the cocktails for Indianola, which means guests at both spots can chose from among 30 cocktails grouped in familial categories such as Collins & Swizzles, Highballs, Sours, Cobblers, Bitter, Spirituous and, Weber’s favorite, Extremely Interesting, Non-Conforming.

“We wanted to take a chef- and cook-driven approach to cocktails here,” said Weber. “We’d found out at Eight Row Flint that we did really well when we batched ingredients — basically creating the base of cocktail minus the acid, which needs to be fresh. At Miss Carousel, we are using ingredients made in-house and preserved.”

One of his favorites on the list is the South American Handshake. “It’s a beautiful deal that’s like South American pisco shaking hands with North American bourbon,” he said. The drink is a blend of watermelon falernum, egg white, a dash of cream, orange flower water, lemon and lime, and a bright little snap of mint.

When planning Miss Carousel, Weber drew inspiration from classic hotel lobby bars in New York, New Orleans and Kentucky; cozy, clubby places with an emphasis on craft and high-end service. In his research, he realized that each of the places he loved had a signature cocktail and he wanted one for Miss Carousel.

That sense of old meets new is something he said he sees in EaDo and why it’s exciting to expand the Agricole Hospitality brand there. “It’s such a sweet spot,” he said. “There’s a massive residential presence, and that was important to us because we wanted to be a place where the neighborhood wanted to eat. And we’re basically three blocks from the George R. Brown Convention Center, so there’s tourist traffic. More than that, though, the people in EaDo know the area is cool and they don’t want to have to leave it to dine and drink out. We love the place and we’re excited to be here.”