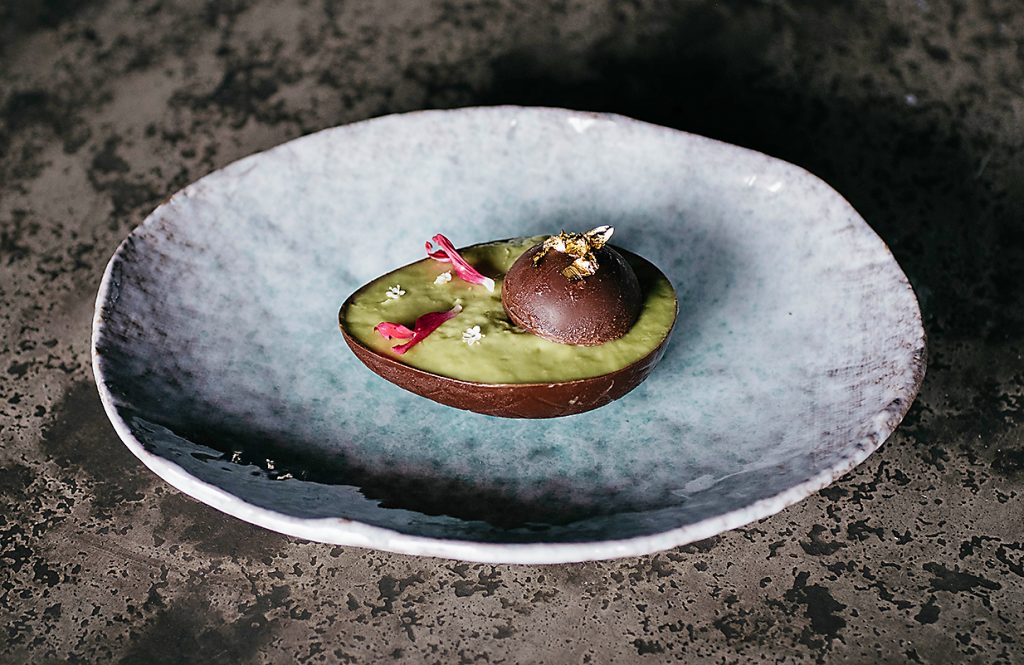 Banana Republics of America, an avocado parfait with dark chocolate and strawberry preserves, at Indigo restaurant in Houston. Photo by Caroline Fontenot.

Indigo, the neo-soul food restaurant featuring tasting menus by chef-owner Jonathan “Jonny” Rhodes, has another accolade to add to its growing list. Earlier this year, Rhodes was a James Beard Award semifinalist for Rising Star Chef of the Year and, in July, Indigo landed on Food & Wine’s Best New Restaurants list. Now, it’s been named by Time as one of the World’s Greatest Places to experience now. Of the 100 places cited by Time, only two are in Texas, Indigo and San Antonio’s Ruby City.

According to a press release, editors, correspondents and experts from around the world selected places for the list based on “quality, originality, innovation and influence.” The honor comes literally a day before another one: Rhode’s showcase meal at the James Beard House in New York City.

“This last year has been such a ride,” said Rhodes via press release. “It’s an incredible honor to be featured on this list going into year two of business. We actually got the official news this morning while we are in NYC prepping for our first James Beard dinner. It’s just motivation for our team to continue to strive for greatness and make our community proud. We are so grateful to everyone that has had a hand in our development.”

Both the dinners at Indigo and the attention are giving Rhodes the opportunity to discuss African-American foodways, especially issues such as scarcity during and after slavery and modern-day struggles that he calls “food apartheid.” These opportunities, though, did not come easy. Before Indigo, Rhodes, a Marine veteran, took various chef gigs, while he and his wife and business partner, Chana, who was also working to support their young family, worked on menu development, wine pairings and obtaining reliable feedback.

Next came the struggle to find funding for the restaurant’s unlikely location next to a convenience store in Lindale Park. It was a tough sell. Generally, 13-seat restaurants aren’t seen as good prospects by investors  — especially when there are only two dinner services a night — and the area isn’t exactly “restaurant row.” Fortunately, the Rhodes persevered and Indigo finally opened. It’s been a media darling ever since.

Diners continue to be intrigued by Rhodes unflinching discussions of African-American history as he delivers each dish, and, of course, by the food. Ingredients are sourced from no more than 200 miles away. Employing traditional methods, food is cooked over wood and charcoal. Fruits and vegetables are pickled and preserved, as was necessary when there was no refrigeration and people also needed to conserve enough food to eat in the winter. The dishes include Assimilation is not Freedom, smoked, aged beef pastrami with brown mustard, beets and sorghum; Domino!, local line-caught snapper smoked over pecan wood; and Banana Republics of America, an avocado parfait with dark chocolate and strawberry preserves. If you think the odd names mean there are stories behind those dishes, you are correct and that is part of Indigo’s dining experience.

Indigo is actually closed for the rest of August for a seasonal reset. However, it’s taking reservations for September 5 and beyond. After tomorrow night’s Beard House event, next up for Rhodes is a series of collaboration dinners with fellow African-American chefs Dawn Burrell of Kulture, Chris Williams of Lucille’s and Dominick Lee of Poitín. Called the Food Apartheid Dinner Series, it runs through September with one dinner per week at each restaurant, and the point is to draw attention to Houston’s food deserts, which are areas where it’s difficult to find healthy ingredients or meals. The first one is on September 4 at Poitín. Information and tickets for each dinner in the series are online.