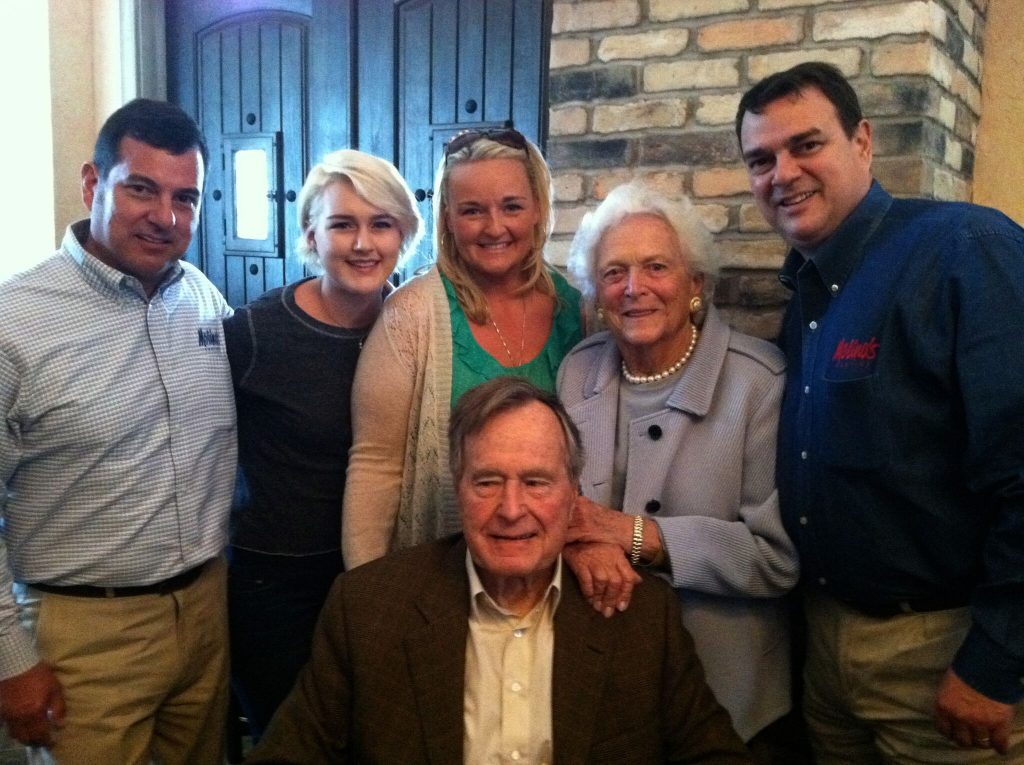 President and Mrs Bush with the Molina family. Photo courtesy of Molina's.

President George H.W. Bush was laid to rest on December 6, 2018, not too long after wife and former First Lady Barbara left this life on April 17. The long-lived pair were married for 73 years. While the rest of the country might remember President Bush for his “Read my lips: no new taxes,” and “thousand points of light” catchphrases, as well as laud him for his foreign policy expertise, Houstonians knew them as fellow residents. The Bushes were also avid supporters of local causes (the Barbara Bush Houston Literacy Foundation is one example) as well as regular patrons of their favorite Houston restaurants. We spoke with some of these restaurant owners and asked them to share their memories of the couple.

Ouisie’s Table owner Wafi Dinari visited with Houston personality Maggie in the Mornings to share memories of George and Barbara’s meals at the River Oaks restaurant. The Bushes were regulars for over a decade and the restaurant buzzed with excitement whenever the Bushes were expected. “It was great,” says Dinari. “The guy walked in and everybody just felt good. It was great before he arrived, when he arrived [and] even as he leaves everyone’s clapping, everyone’s meeting him [and] shaking hands. He filled the room not just being a president but being the nice man he is. Barbara is awesome too.” He adds that the president was always genuine, nice, down to earth and very witty. He had several favorite dishes, too, which he enjoyed from a corner table overlooking the dining room. Among these were the shrimp and cheese grits, the seafood crepe, crab Cobb salad and lemon ice box pie.

Maria Christie of Christie’s Seafood and Steaks said she was “proud to be a member of [the] club [of Houston restaurants patronized by the Bushes].” The president dropped in for a meal before early voting on Nov. 1. He was a regular there, enjoying the restaurant’s oyster stew and sitting at the same table, often with former Secretary of State James Baker.

Beginning with his tenure as CIA Director, and continuing during his time as vice president and president, George and Barbara Bush lived in The Manor House at The Houstonian. In 1990, when the G7 Summit was held in Houston, a treaty was signed in Manor House’s Botanical Room.

With the couple’s connection to Manor House, it’s perhaps not surprising to learn the staff there got to know them well. So well, in fact, that The Houstonian team felt comfortable enough approaching Barbara about her chocolate chip cookie recipe.

According to CultureMap, the First Lady got the recipe from a friend sometime in 1992, and sent it into Family Circle magazine for their “presidential bake-off.” Someone on The Houstonian staff saw the recipe and asked Mrs. Bush if the hotel restaurant could use it. It has been doing so  — with the former first lady’s permission, of course — since 2016. (The main restaurant inside the hotel just rebranded and emerged as TRIBUTE at The Houstonian. Longtime executive chef Neal Cox is still running the kitchen, too.)

“We also make them for weddings, special celebrations and give them out to children with milk in the lobby during the holidays,” said Seliece Womble, Campus Director of Public Relations & Marking at The Houstonian. The hotel even has a link to the cookie recipe on its website (and it’s also at the end of this article).

“It was always a pleasure seeing President Bush at Backstreet Cafe,” said Tracy Vaught of H-Town Restaurant Group, which owns and operates the restaurant as well as Caracol, Third Coast, Xochi and Hugo’s, which she says the Bushes also visited. “He was always warm and gracious to all the guests that greeted him and asked for photos. He was dry-witted, friendly and warm with guests and he often saw a friend or two in the dining room – he knew so many people!”

Vaught said the president liked dining outside on the patio. “He would put his hand on my shoulder for a bit of help navigating the steps out to his table,” she recalled. “He came with his chief of staff and sometimes Barbara. We always had low-fat milk ready for his coffee or cappuccino. And he liked an occasional glass of wine ‘even if it makes me sleepy,’ he would say. We send our deepest condolences to the Bush family.”

Russell Theode, owner of Lei Low, was a server at Backstreet Cafe in the mid-2000s, well after Bush left office and came back home to Houston. “I’ll never forget those days when he would come. The Secret Service would come in and sweep the building,” he said. “I never got to wait on him, but was often there when he would come. I remember he always knew people’s names. If he didn’t know your name, he would find out and use it constantly.

Our hearts are mourning this evening as we all feel the loss of President George H. W. Bush and our prayers go out to the Bush family at this time. From our family to the staff, we all have such fond memories of 41, and we’re so honored that we were able to get to know Mr. and Mrs. Bush so well over the years. They were as kind as they were determined, and had such a love for their family, their country, and each other. RIP, Mr. Bush, and say hello to the missus for us. We’ll be eating a tamale in your honor. ❤️⁣ ⁣ ⁣ ⁣ ⁣ ⁣ ⁣ ⁣ ⁣ ⁣ #georgehwbush #presidentbush #presidentgeorgehwbush #rip

And then there was the time a young waiter was concerned about how sternly to enforce TABC rules. “There was one time that the Bushes snuck in early, before an Astros game when he was going to throw out the first pitch,” explained Riccardo. “Security came in and the place was suddenly super busy. A young college-aged waiter was serving their table. He came to me and said ‘I hope I didn’t screw up?’ I said ‘I hope you didn’t screw up either, what happened?’ He said [Bush] ordered a beer and it was 11:45. I told him ‘I’m sorry sir, you can’t order a beer before noon on Sunday.'”

The Molinas are honoring the Bushes’ legacy with a sock and book drive that started on December 5 and lasts through Christmas Eve. The drive salutes the First Lady’s love of reading and the president’s affinity for funny socks. Guests are encouraged to bring socks and books to the restaurants; books will be donated to the Barbara Bush Houston Literacy Foundation and the socks will be given to Interfaith Ministries to distribute to members of its Meals on Wheels program.

“He was always a delight and very lighthearted to deal with and take care of,” Raul told the Washington Post. “We thought of him as part of our family.”

Directions:
Blend the butter, granulated sugar and brown sugar. Beat in the eggs. Sift and add the flour. Add the baking soda and salt.  Add and mix in the oatmeal, vanilla and chocolate chips. Drop by teaspoonfuls onto cookie sheet and bake for 10 minutes at 350 degrees.