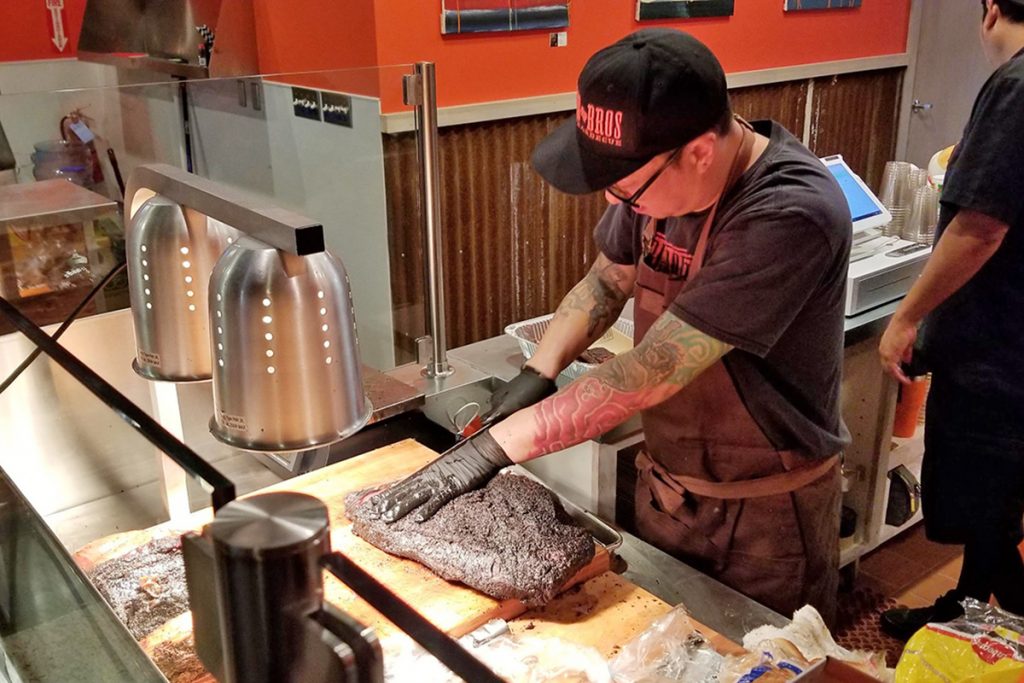 In the article, Vaughn explains, “We launched [the top 25 new barbecue joints list] in 2015 because the level of activity in the Texas barbecue scene had gotten so intense that it seemed wrong to make readers wait to hear about the worthy rookies until we released our next Top 50 list.” That isn’t due until 2021.

With the growth of barbecue pop-up, trucks, and trailers, Vaughn decided to only include locations with “a permanent address and regular hours.” He also didn’t include second locations of restaurants already on the Top 50 list, such as Truth Barbecue, which recently opened a full-fledged restaurant in Houston.

Here are the four new Houston barbecue joints that fit Vaughn’s criterion and made the list.

Blood Bros. BBQ, 5425 Bellaire: The playful establishment from brothers Terry and Robin Wong and “blood brother,” partner and pitmaster Quy Hoang integrates Texas barbecue with traditional Asian ingredients and preparations. Since opening in January, they usually sell out by 3 p.m., thanks in no small part to the fan base they built hosting many pop-ups. Vaughn praises their Smoked Turkey Banh Mi, Smoked Brisket Fried Rice and Green Curry Boudin as well as more traditional smoked meats, including their “smoky and tender” brisket, which Houston Food Finder recently cited as an essential Houston dish.

Feges BBQ, 3 Greenway Plaza: One of our 2018 Best New Restaurant Picks, this barbecue place, which combines tradition and innovation, is in the most unlikely spot: an office building food court. The stand was thoughtfully set up with a real smoker, so take that as a message that, regardless of setting, owners Erin and Patrick Feges do not compromise on their food. Vaughn’s pro tip is to try as many of professionally trained chef Erin Feges’ side dishes as you can — and we couldn’t agree more. The outside-the-box delights include Moroccan-Spiced Baby Carrots, Elote Corn Salad, cracklins and, for dessert, the PB&J Chocolate Cake. The excellent sides by no way mean that the smoked meats don’t get equal attention. Like we said, there are no compromises at Feges BBQ.

Harlem Road Texas BBQ, 9823 Harlem Road, Richmond: Vaughn calls chef Ara Malekian “the Indiana Jones of Texas barbecue.” With his fondness for Armenian coffee, black cowboy hats and cigars, the chef indeed cultivates an unforgettable image. According to Vaughn, he also “smokes one of the finest beef ribs I have ever eaten.” Occasionally, Harlem Road also prepares hard-to-find smoked meats, such as octopus and lamb. Though Vaughn’s description of their brisket and sides as “not half bad” seems like faint praise, he does encourage visitors to “save room for the chocolate bread pudding made from croissants.”

Reveille Barbecue Co., 37421 FM 1774, Magnolia: As revealed by Vaughn, James McFarland and Michael Michna opened this barbecue joint in Magnolia as a “passion project.” Their resulting success is fodder for all of those who say, “Follow your dreams!” Sometimes, it indeed pans out. As Revellie grew, the owners brought on pitmaster Wade Elkins, formerly of Feges BBQ (also on the list) to expand the menu and hours of operation. Vaughn’s must-try meats include the “peppery brisket, peppery turkey and peppery beef ribs” — Reveille really believes in the power of pepper — and the sausage specials, which include Taco, Bánh Mì and Double IPA.

Along with the accolades, the Houston-area barbecue joints on Vaughn’s “best new” list are probably about to face a new challenge: staffing up to handle long lines of the barbecue-curious.

There are worse problems to have.

Houston Food Finder17 hours ago
Event Alert: French Country Wines is hosting a tasting this Saturday, April 17th! Join them from 12p-5p. Get the details below!

Houston Food Finder2 days ago
During his weekly Whiskey Wednesday virtual tasting, Sean Beck, sommelier and beverage director for H-Town Restaurant Group, invites attendees to sip, socialize and learn. Writer Ryan Kasey Baker dropped into the recent event that featured Fawn Weaver, whose distillery Uncle Nearest Premium Whiskey is named for the former African American slave credited with teaching Jack Daniel how to create the iconic spirit. Click below to learn more about the history and heritage behind this unique brand!

Houston Food Finder with DR Delicacy.2 days ago
As spring unveils seasonal surprises, so, too, does DR Delicacy! Choose from an enticing selection of fresh produce sourced from the US and France that will perk up your routine — and your dinner plate. There are garlicky ramps, versatile squash blossoms, playful fiddlehead ferns, buttery white asparagus and alluring Charentais melons. Order online or visit the warehouse at 4120 Directors Row Suite A open Monday-Friday 10 a.m. to 4 p.m. and Saturday 10 a.m. to 2 p.m. Note that some items require pre-ordering and are noted on the product page. Text or call (713)-303-3503 for more information.
https://drdelicacy.com

Houston Food Finder3 days ago
Like many of life's delights, the torta ahogado is the result of a happy accident. Translated as "the drowned sandwich", it is popular in Mexico and several Houston restaurants serve it, too. Staci Davis provides a culinary history lesson plus details on five local variations to get your fix.

Five Must-Try Tortas Ahogadas in Houston - Houston Food Finder
Tortas ahogadas are still a rare find in the Houston area, but we rounded up some essential places to find this elusive and decadent sandwich
houstonfoodfinder.com
4    View on Facebook

Houston Food Finder with Pearland Convention & Visitors Bureau.4 days ago
Visit Pearland for spectacular comfort food no matter what you are craving! Find warm, sweet, savory and (of course) fried selections for year-round good vibes. The Pearland Convention & Visitors Bureau website, Visit Pearland (visitpearland.com), is your one-stop place for the best bites in town. Whet your appetite with these four must-try dishes and visit the website for more!