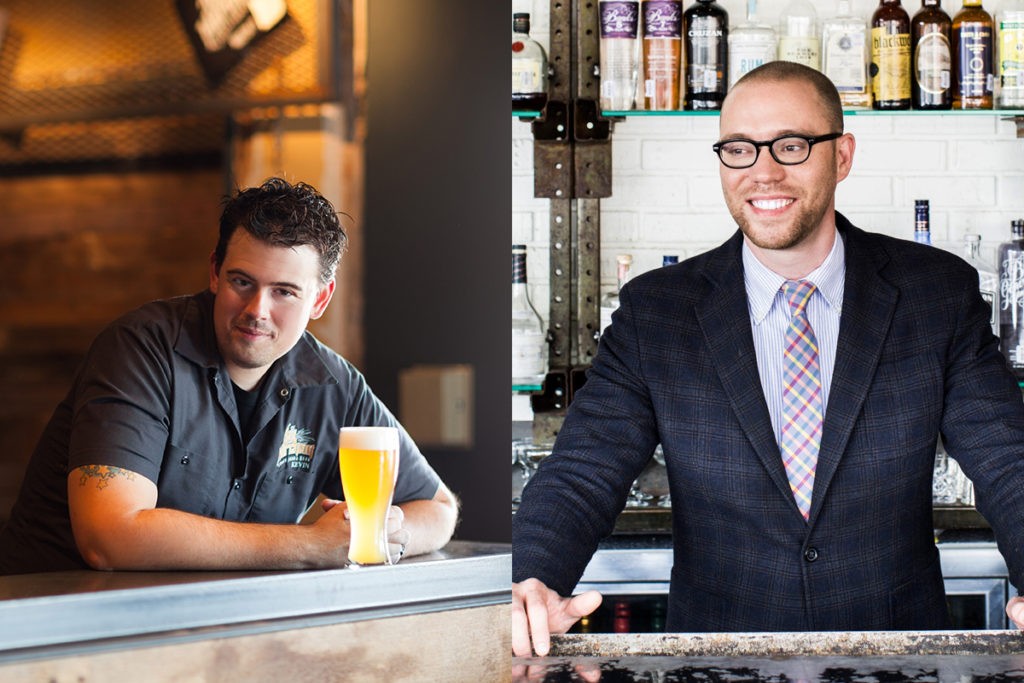 We spoke with Kevin Floyd and Bobby Heugel to get some insight on why
they're now working on independent projects.
Photos by Julie Soefer

In a joint statement, Houston bar and restaurant owners Bobby Heugel and Kevin Floyd have announced they are splitting up their business interests. Heugel is getting Floyd’s ownership in Anvil Bar & Refuge, The Pastry War and The Nightingale Room while Heugel is relinquishing his in The Hay Merchant, Underbelly and Blacksmith. They’ll continue to own the property that Blacksmith sits on as well as their minority stakes in cocktail bar Julep. We spoke with both Floyd and Heugel by phone to get their insights on the decision.

First, a little history. Their friendship goes back to their teen years when they worked together at Brook Mays Piano Store on Highway 59 and Buffalo Speedway. They stayed friends, and after college years and restaurant jobs, opened Anvil Bar & Refuge in 2009 (with some help from others).

Anvil is a cocktail bar. Floyd wanted a beer bar to come next. That happened when The Hay Merchant opened in February 2012. Underbelly, with chef Chris Shepherd, opened the following month. Next came Blacksmith coffee with David Buehrer and Ecky Prabanto of Greenway Coffee, Julep with former Anvil bar manager Alba Huerta, The Pastry War (intially with Heugel and Huerta) and The Nightingale Room with former Anvil bartender Mike Criss. Somehow in the middle of all that, they, along with with the other members of non-profit organization OKRA (Organized Kollaboration on Restaurant Affairs), opened The Original OKRA Charity Saloon.

So, it’s an understatement to say that they, as a team, have had great success. “If you look at all those businesses being affected [by the split], it’s a very true statement to say that none of them would be what they are without the influence of both of us,” said Floyd.

Was this just the natural result of professional growth? Yes, but Floyd pointed out that the transaction itself was rather unique. “Since we’re not rich people, neither one of us had the cash to be able to buy the other one out. We happened to have these fiscal interests that balanced each other out,” said Floyd. “Other people probably would have handled it differently. They would have probably made cash exchanges for one another’s interests but neither one of us had that luxury. Otherwise, yeah, it’s fairly natural.”

As far as who got what, Floyd says that was an easy decision. “This business transition is just reflective of the way we’ve been operating the companies for years. I haven’t had a major influence in Anvil for years and the same for Bobby at Underbelly, Hay Merchant and Blacksmith. I had almost no influence on The Pastry War at all and my influence at The Nightingale Room was that I built it. After I built it, I had no influence at all.”

Both Heugel and Floyd says the process of separating businesses has taken years simply because they weren’t in a big hurry and wanted to ensure it wouldn’t negatively impact employees, investors and other stakeholders. “There wasn’t a specific need for us to go our separate ways. We took our time to make sure it wouldn’t disrupt the staff and cause any problems for our partners. We wanted it in a calm and organized manner and I think that just takes some time,” said Heugel.

Neither will rule out doing business with each other again in the future. “I’m open to the idea,” said Heugel. “As a matter of fact, we’ve been talking all day today because we’re rebuilding the bar at Anvil and Kevin has agreed to consult on the construction side.”

Floyd is also open to maybe opening a business together again someday, but emphasized that neither is involved in each other’s current projects. “I don’t hardly ever close the door on anything,” said Floyd. “but if you look at our two projects we both have under development right now, One-Fifth has a large beverage component to it but I didn’t seek out Bobby’s input on that. His project has a large food component, which I’ve been doing a lot on with Chris [Shepherd] on for years but [Bobby] didn’t seek out my input on that. Generally speaking, I’m the one that has taken care of construction for all of our projects. Obviously, there’s some level of construction happening at his new spot that I don’t have anything to do with.”

Floyd and Heugel both emphasized that anyone who paints this as an angst-ridden split is off-base. “I think they’re foolish,” said Floyd. “I think that the leisure media in a city like Houston really enjoys the drama and stuff. That’s not to say it’s not there in some cases but it’s often not to the degree that the press makes it out to be. There’s nothing dramatic about this. It’s a natural progression to what we’ve been doing. The reason why it was so slow is because what is important to us is the stability of these businesses.”

“I don’t think there’s anything that indicates that’s the case,” said Heugel. “Kevin and I have been friends forever. We started working together when we were thirteen. We have only not had a job together for three years since I was 13. I think there’s a life issue there that supersedes what we have done in the restaurant and bar industry and I don’t think that people typically find ways to work that well together and do as much as we’ve done together. It was easy to have frank conversations on what our future looks like because we know each other so well. I don’t think there’s anything there but a history that indicates a lot of friendship and a lot of care for one another. That’s always been more important than business.”

Houston Food Finder3 hours ago
We're looking for an excellent, marketing- and social media-savvy writer as a Sponsored Content Manager. This is a contract role with flexible hours, but responsiveness is key. You'll be doing the very important work of communicating our sponsors' messages and ensuring we meet their content deadlines.
⁣
https://houstonfoodfinder.com/classifieds/show-ad/?id=43247&fbclid=PAAaa4M3hKE-6NT_ZWL1K4ZP6mti5_Ljh4NHuFWuMUxj_hfBxIl9l87nTnzPo

If you enjoy reading Houston Food Finder’s articles, we need your support now. If everyone who reads our articles chips in $3 a month, we’re done asking and can publish more articles! Click for details!
View on Facebook