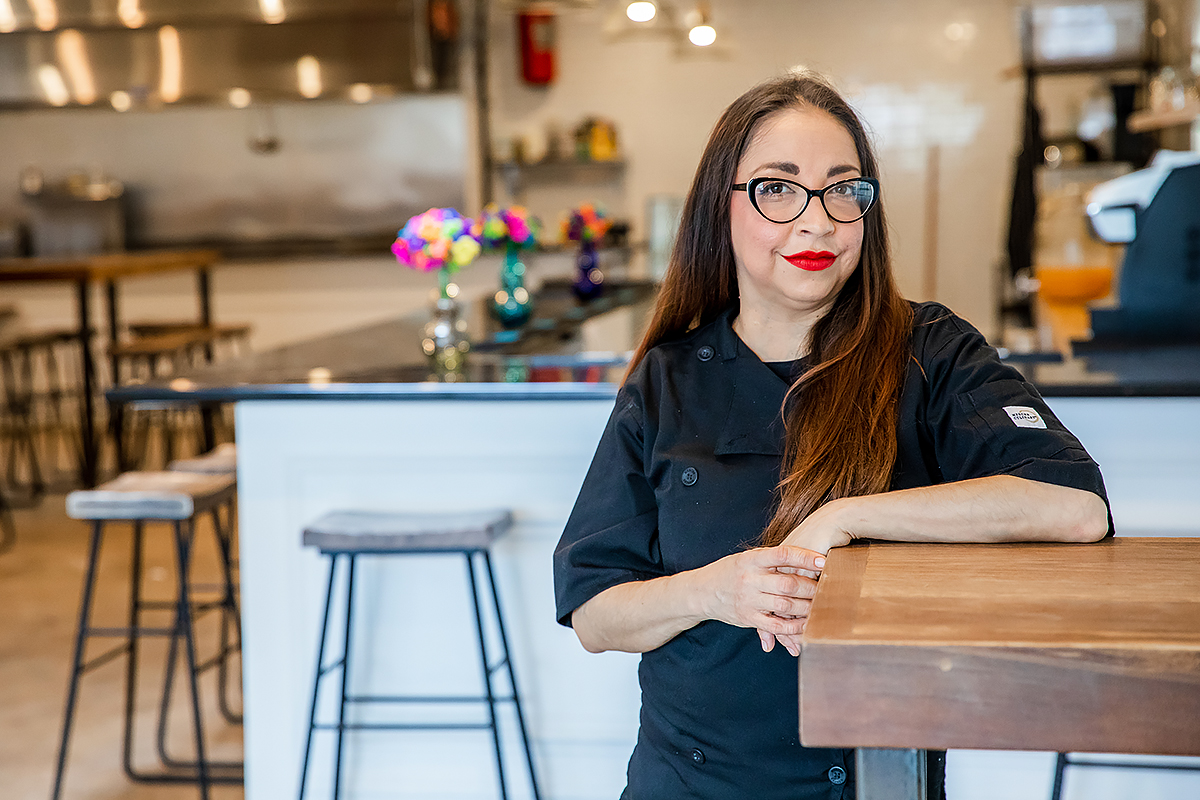 Vanessa Lomeli, formerly of Habanera & The Guero, is opening her own restaurant called The 915. The name is the area code of El Paso where she grew up. Photo by Becca Wright.

Updated, 4/13/2021: Soon after opening The 915, owner Vanessa Lomeli, who is a kidney donation recipient, landed in the hospital on March 26. The kidney that her father donated eight years ago had failed. Five surgeries — not only to remove the failed kidney but also to deal with a severe hernia — and 18 days later, Lomeli was discharged. The 915 is temporarily closed as a result — and that’s making Lomeli’s life especially difficult since she’s a mom who has been without a regular income since leaving Habanera & The Guero in April 2020.

To help cover her expenses in the meantime, Phaedra Cook, editor and publisher of Houston Food Finder (and the author of this article) created a donation fund for Lomeli on Facebook. (Lomeli worked for Houston Food Finder briefly in 2019 and helped coordinate the first Perfect 10 Gala.)

Rachel Lewis of Hometown Social, who assisted Lomeli with media communications for The 915 before the hospitalization, also helped facilitate the fund by arranging for the non-profit Artists For Artists to receive the donations on Lomeli’s behalf and then distribute them to her.

Until a new kidney donor is found for Lomeli, she’ll need daily dialysis. To date, the fund is still $4,970 short of meeting a $20,000 goal. To help Lomeli get back to health and to her career as a full-time restaurant owner, visit the Facebook fundraiser page.

Many Houston diners are already familiar with Vanessa Lomeli, perhaps from her cooking at Habanera & The Guero in south Houston or from her appearance on Food Network’s “Restaurant: Impossible.” On March 23, Lomeli is debuting her own restaurant: The 915, located at 2914 White Oak in the Heights. (Note that there’s not yet a street sign and the restaurant is located behind Pho Binh.)

Initially, The 915 — named for the El Paso area code where Lomeli grew up — is offering only to-go service, but will soon offer dine-in. Third-party delivery is available through Uber Eats, DoorDash and Grubhub.

On the menu, customers will find many hearty El Paso-style Mexican dishes based on Lomeli’s family recipes, and some will be familiar to patrons of her former workplace. “I will have most of the things that I had before but will definitely add some new items: gorditas, sopes, burgers, and my version of Chico’s Tacos (an iconic restaurant in El Paso that you either love or hate),” said Lomeli.

On the menu are multiple types of enchiladas, including the open-faced Red Chile with either cheese and diced onion or chicken and cheese (a fried egg on top is highly recommended), Green Chile and Mole.

If the excellent Green Chile Queso that Lomeli used to serve at Habanera & The Guero is any indicator, it will be a must-order starter at The 915, too. Other appetizers or starters include Nachos Montadas, spicy or regular guacamole, and Trio of Dips with a choice of black bean dip, queso, guacamole, avocado salsa, salsa quemada, habanero salsa, tomatillo salsa or salsa cruda.

Those who want to start with something warming might instead opt for Posole Rojo or Sopa Azteca, a spicy soup with a red chile broth base that also includes chicken, avocado, crema, onion, cheese and tortilla chips.

The 3,500-square-foot restaurant space can seat approximately 70 guests and offers a front patio as well as bar seating with a great view of the open kitchen.

Also among the entrée selections are the flautas, which are similar to taquitos or deep-fried rolled enchiladas. There are Red Flautas Ahogadas, filled with a choice of  picadillo, potato, or chicken then sauced with spicy tomato broth and topped with shredded cheese, Green Flautas, which swap in tomatillo sauce and offer a brisket filling option rather than picadillo, and Flautas a la Chuco with the same filling options as the green but instead accompanied by spicy salsa, crema, avocado and charred lime.

For fun and casual fare, Lomeli also reinvented her Mexi-Dog: a hefty hot dog now topped with bacon, queso, mayo, salsa verde, black beans, grilled onions and fries, and there’s a Juarez Dog, too, which also has bacon, queso, beans and mayo, but swaps in ketchup, salsa, torreado, and charred tomato for the other ingredients.

Once the dining room opens, it’s likely that The 915 will temporarily be BYOB as the liquor license hasn’t yet been issued. (The press release noted that Charlie Liquor is conveniently just down the street at 3018 White Oak.)

Once the liquor license is received, The 915 will serve the over-the-top frozen and regular margaritas made with fresh fruit — another of Lomeli’s specialties. Non-alcoholic beverages include her new “virgin margaritas”, or frozen variations of agua frescas with a wide variety of flavors: cucumber, mango, cantaloupe, watermelon, raspberry mint, strawberry, tamarind, lemon and dragon fruit.