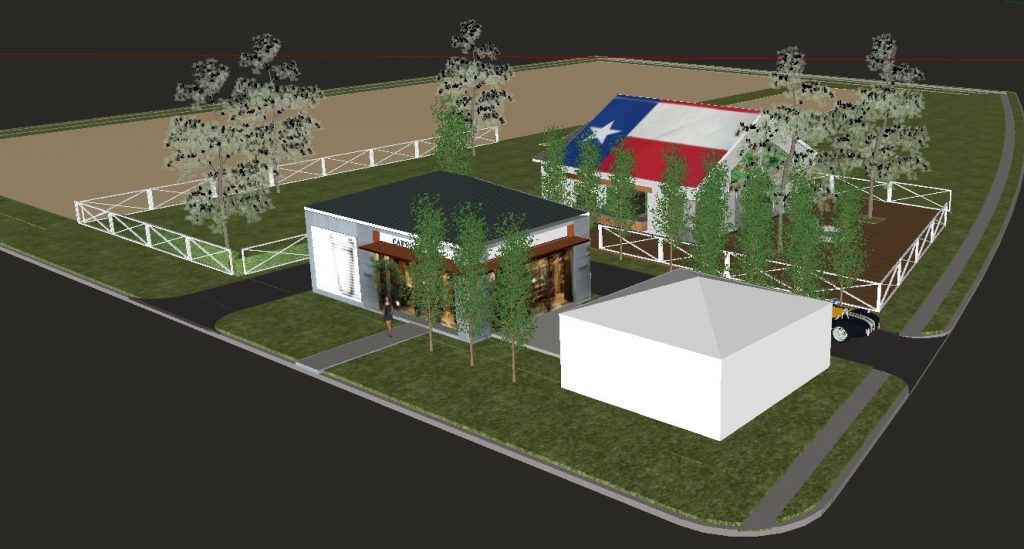 A rendering of the forthcoming East End Backyard. Rendering by Alex Cox-Cuzzi.

Former Houston Dynamo forward and current restaurateur Brian Ching has impacted Houston over the years both on and off the soccer field. From scoring goals to creating a welcoming space with the bar Pitch 25 in 2018, his reach is broad. Ching’s next project, East End Backyard, is set to open this October at 1105 Sampson, east of downtown Houston, and it promises a range of attractive amenities. Ching worked with crowdfunding company NextSeed to raise community support for the bar and recently surpassed its full funding needs with $175,000.00. More information about the fundraising is available on NextSeed’s website. A total of 162 different investors contributed to the funding goal including notable minority investors Peli Peli CEO Shehzad Roopani and Juan Carlos Deshon of Cordua Restaurant Group, which operates Houston staple Churrascos.

“We’re in the process of getting final permits from the city to begin construction,” says Ching. “We have already done some preliminary demo[lition] work [and] we’ve also been working with other individuals on opening a small coffee shop adjacent to the premises, as well as talking with some East End Backyard local entrepreneur-chefs to open a small taco shop next door. The long term scheme is to get five or six complementary businesses to feed into a shared backyard.”

Ching’s idea for developing the new concept stems from the lack of backyard space around the neighborhood. Many of the newer developments offer residents almost no yard space and Ching wanted to provide this to the residents.

“We intend [East End Backyard] to be very dog-friendly,” says Ching. “We [will] create a little dog park, we will have dog treats for the [customers’] dogs for when they come. We want to make it as home-feeling as we can. When you look at the block now, it’s kind of bare.” He adds that they plan to plant more trees, too.

In addition, Ching owns a hot dog truck that he intends to have stationed at East End Backyard on a regular basis. Currently, Ching and his partners are concentrating on finding additional food trucks and barbecue pitmasters for a regular rotation of pop-ups. Further, the space will be rentable for different events including charity fundraisers, as well as self-hosted summertime slip-n-slide parties and wintertime cookouts. While the space will not have a kitchen on-site, approved vendors are encouraged to bring their own equipment to cook for the crowds and add to the local flavor.

Drawing on his experience with Pitch 25, Ching says he’s realized that people don’t just want a place to come “sit down, drink and leave.” Instead, residents of EaDo want a place to “hang out, engage with their neighbors, play games and, especially, bring their dogs.” When East End Backyard opens this fall, those wishes are likely to be granted.

Editor’s note: this article, originally published on July 16, was removed and republished on July 26 due to a photo provided to us without proper usage rights. That image has now been replaced.

Houston Food Finder13 hours ago
Summer temperatures have arrived in Houston, and what sounds really, really good right now is a chilled seafood dish with an icy cocktail alongside. You can find that and so much more with Beth Levine's brand-new Hit List of #Houston restaurants to visit for June 2021.