The 2019 Houston Barbecue Festival Brings Together the Best in Texas 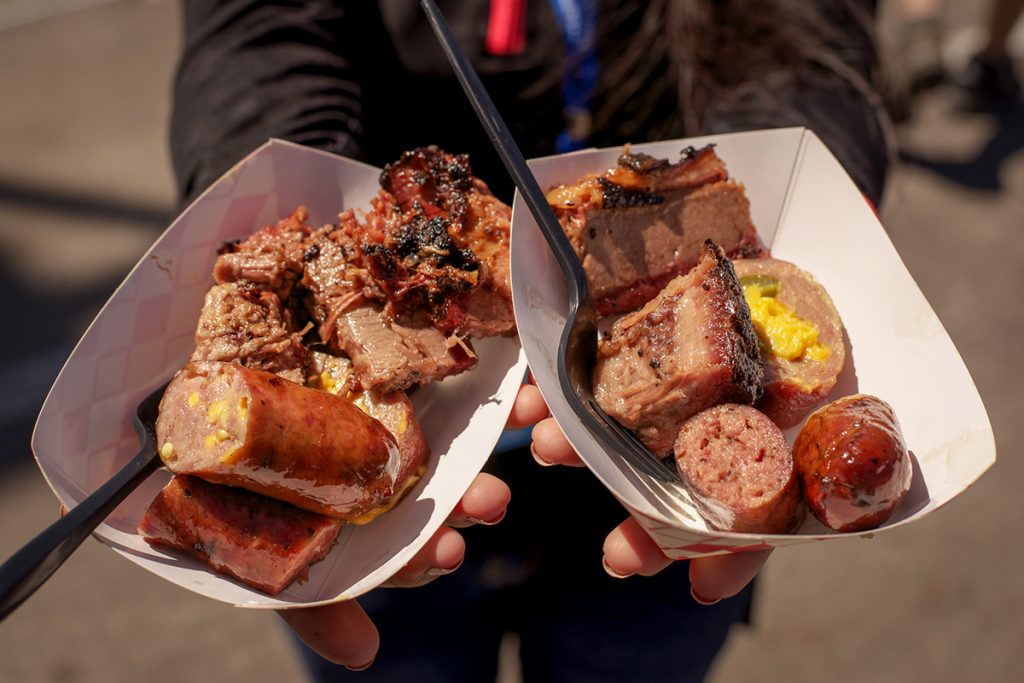 Though May is officially designated National Barbecue Month, April should be declared “Houston Barbecue Month” due to the much-anticipated arrival of the annual Houston Barbecue Festival. For 2019, the seventh celebration of the best local barbecue takes place on Sunday, April 14. Due to overwhelmingly positive feedback from attendees at last year’s event, the festival is again at the Humble Civic Center and Arena, a huge facility with acres of parking as well as a large, covered pavilion and an open-air arena that is useful in case the weather turns bad. The complex is located one mile east of US 59/I-69 on Will Clayton Parkway — just south of Humble — and is easy to find.

This festival highlights the variety of cooks, pitmasters and supporting staff who contribute to the diversity of the Houston barbecue scene. Visiting all of the 28 participating barbecue joints individually would take weeks or months and cost hundreds of dollars. The Houston Barbecue Festival brings together unlimited samples from the best that Texas has to offer for one low price.

“Houston is the hottest barbecue market in the country, and the festival represents that,” says co-founder J.C. Reid. “There is no other barbecue festival that represents the many and diverse influences that make Texas barbecue great.”

Of course, classic Central Texas-style barbecue has a significant place in the event, too. Participating Houston-area joints that draw inspiration from that region include CorkScrew BBQ (named the seventh-best barbecue joint in the state by Texas Monthly), Killen’s Barbecue, Pinkerton’s Barbecue, Roegels Barbecue Co., The Pit Room, Spring Creek Barbeque, The Brisket House and Tin Roof BBQ. Two of Central Texas’ most famous smoked meat establishments, Louie Mueller Barbecue (number five on the Texas Monthly list) and Southside Market & Barbeque are again making the trek to Houston for the event.

Recently announced newcomers for 2019 (clockwise from upper left) include: Lance and Boo Eaker of Eaker Barbecue in Houston, James McFarland, Wade Elkins, and Michael Michna of Reveille Barbecue Co. in Magnolia, Allen and LaShawna Rhoden of The Rusty Buckle BBQ Company in New Caney, and Randy and Sylvia Duncan of Daddy Duncan’s BBQ in Katy.

One of the goals of the Houston Barbecue Festival is to introduce and recognize new and up-and-coming barbecue talent from the Houston area. These vendors have all opened within the last two years and now serve their communities and customers on a regular basis. In addition to the newcomers, the Festival welcomes back veteran meat slinger Wesley Jurena of Pappa Charlies Barbeque at Cypress Trail Hideout in Cypress.

The scheduled 2019 music headliner is Folk Family Revival, a four-piece Magnolia, Texas-based band that has gained a reputation for live performances on the festival and event circuit throughout Texas and beyond. From their bio: “Armed with a sound that mixes the rootsy stomp of the Southern states with the trippy swoon of the West Coast, Folk Family Revival make music for rock clubs and rodeos, dive bars and honky-tonks, or campfires and cantinas.”

General admission tickets are available online for a pre-sale discount of $50 each (limited time only), and a handful of VIP tickets remain for $120. A ticket includes entry into the festival and unlimited samples from each of the participating barbecue joints. VIP tickets allow entry an hour earlier (at noon) and also includes unlimited barbecue samples, plus a festival t-shirt and one free drink ticket.

To ensure a quality event for everyone involved, the number of tickets is limited. All tickets are sold in advance — none are available at the gate. Children six and under are admitted free. No pets are allowed, with the exception of service dogs.