Don’t-Miss Food Event: Head To The Texas Countryside For The Butcher’s Ball — Updated 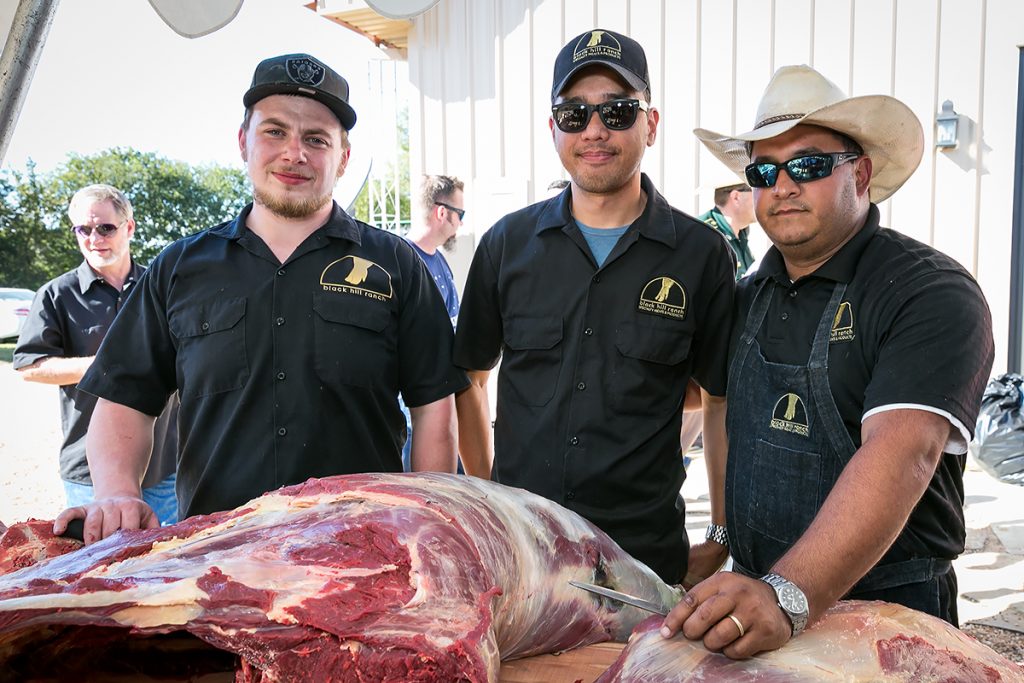 The Black Hill Ranch team at the 2016 Butcher's Ball. Photo by Emily Jaschke

Last year’s Butcher’s Ball at the Rockin’ Star Ranch in Brenham was such a rollicking good time that it will be back for a second year on October 15, 2017. In addition to meaty bites prepared by top Texas chefs (of course there’s also a competition to see whose are best), the event features a silent auction, butchery demonstrations, craft cocktails and expert panel discussions throughout the day. Tickets for adults start at $100 and are on sale now. The cost for kids 12 and under is only $25. Those who don’t want to hoof it to Brenham from Houston on their own can get a sweet ride on a luxury shuttle bus for $30.

This year, the Butcher’s Ball is quite expansive and is comprised of several activities that could be standalone events elsewhere. Depending on the ticket options guests select, the fun can start as early as 8 a.m. or as late as 1 p.m. Read on for breakdowns of each main aspect.

This year, there’s good reason to head to the ranch early if you are willing to experience what it really takes to get meat from the hoof to the plate. At 8 a.m., Felix Florez—a rancher who runs Black Hill Meats and is a co-owner of Ritual restaurant in Houston—is providing one of his heritage breed pigs for an auxiliary competition entitled “Le Boucherie vs. La Matanza.”

The terms respectively refer to the French and Spanish feast traditions where a pig is slaughtered and as many parts are used as possible to feed a community. One team of chefs will use the French method while the other takes on the Spanish version. Each will be judged on their slaughter technique, butchery and how effectively all the parts of the pig are used. Proceeds from this competition go to Piggy Bank, which helps small farms acquire the top genetics needed to produce heritage breed pigs.

Team Boucherie includes Graham Laborde of Killen’s Restaurants, Jeff Weinstock of Cake & Bacon, Joe Cervantez of Brennan’s of Houston, Matt Lovelace (formerly of Triniti), Michael Nutt of Café Rabelais and Randy Evans, director of restaurants for H-E-B. Joining Team Matanza is Alex Padilla of The Original Ninfa’s on Navigation, David Cordúa of Américas and Churrascos, Javier Lopez (now at Sysco and was at Brennan’s of Houston for 16 years), Kevin Callahan of Ritual, Peter Garcia of El Meson and Philippe Gaston of Izakaya.

One of the most interesting aspects of the butchery competition is that attendees are actually invited to get some hands-on experience with either of these star-studded chef teams. Ticket holders are welcome to assist with the preparations. Attending this morning event adds $50 to the ticket price, but includes not just the education but also breakfast by Cake & Bacon and fresh juices and cocktails by Robin Berwick of Double Trouble Caffeine & Cocktails and Lainey Collum of Yauatcha.

The Main Event: The Butcher’s Ball

The Butcher’s Ball event itself starts at 1 p.m. and runs until 8 p.m. There are butchery demonstrations during this time as well by Texas Beef Council 2017 Butcher of the Year Bryan Butler of Salt & Time in Austin and Richard Knight (of the Breaking Bread farm dinner series and former executive chef of Hunky Dory).

Dale Watson and His Lone Stars is the music headliner, and also featured are the White Ghost Shivers, Will Van Horn Trio and Craig Hlavaty spinning tunes from the extensive Vinyl Ranch catalog. (Hlavaty is also a journalist with the Houston Chronicle and CW39 Newsfix.)

Ranchers in the area are dealing with the loss of livestock to the floods caused by Hurricane Harvey. There were so many feet of water that it was impossible to get them to high enough ground; southeast Texas is essentially flat. Proceeds from this year’s Butcher’s Ball are going to Piggy Bank and the Trust for Conservation Innovation, which will distribute funds directly to those growers and producers affected by the storm.

A panel discussion will address a more positive outcome of the storm: how Houston’s restaurant and bar community worked together to feed tens of thousands of first responders, shelter residents, and more. It’s titled, “Disaster Response: How The Service Industry & Food Communities Can Make A Difference.” Phaedra Cook of Houston Food Finder (that’s me) is moderating a panel that includes Richard Knight, Alba Huerta of Julep, Felix Florez of Black Hill Ranch and Tyler Horne of Urban Harvest. The discussion will include how that was accomplished and the lessons learned that will make a similar effort more effective in the future.

Kim Korth, publisher of Edible Houston, is moderating another panel called “The Importance Of Sustainable Ranching.” The participants are Brady Lowe of Piggy Bank and the Cochon555 events, Dustin Windham, founder of Grit Grocery, Ford Fry, whose restaurant empire includes State of Grace and forthcoming Superica, chef Monica Pope of Sparrow Cookshop and Steve Harrison of 44 Farms. The panel will help define exactly what sustainable ranching is, how it can be improved and how those practices affect the meat that ends up on our plates.

Of course, what everyone really comes for is amazing food and drink. There will be no shortage of either. Here’s a list of the chefs, cooks and pitmasters coming from south and central Texas to compete for the Golden Cleaver award:

Some of Houston’s top bartenders are making cocktails to sip on alongside the food, too. Alba Huerta of Julep is guiding the beverage selection all day, supported by Lainey Collum of Yauatcha Houston and Robin Berwick of Double Trouble Caffeine & Cocktails.

Stuff To Leave With

Guests might consider getting some holiday shopping out of the way (yes, heaven help us all it’s time to think about that already) and help a good cause at the same time by bidding on items at the extensive silent auction. Up for offer are art, food, and experiences. There’s also an onsite farmer’s market curated by Urban Harvest.