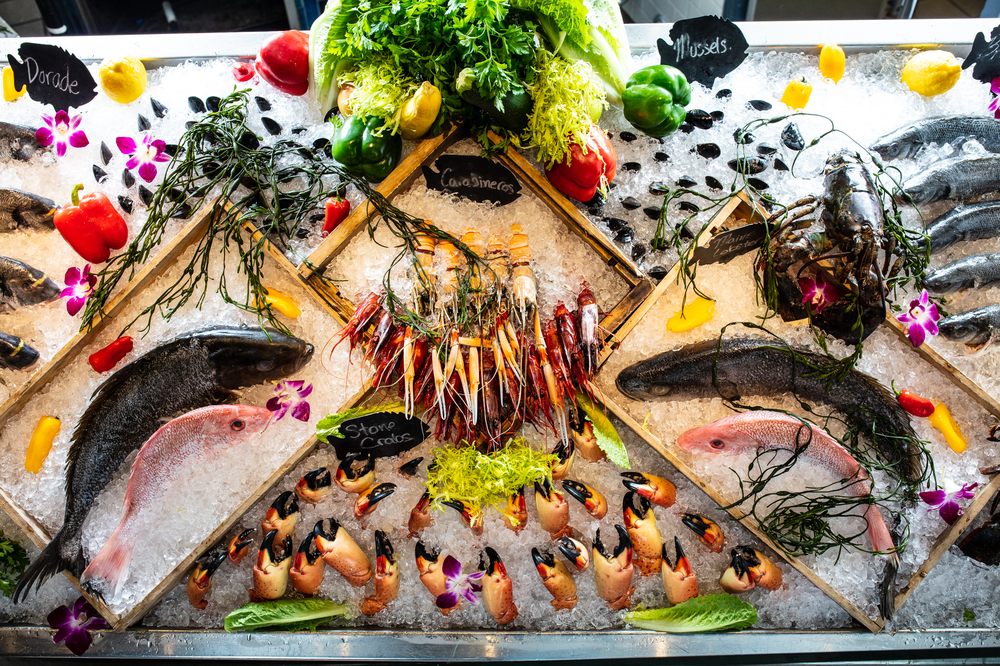 The River Oaks District at 4444 Westheimer has become known for its high-end, ritzy restaurants, such as Bisou and 48 Steak. Ouzo Bay and Loch Bar, both from Baltimore-based Atlas Restaurant Group, are the latest additions to the glamorous dining scene.

Ouzo Bay in Baltimore is known for its elevated Mediterranean cuisine and the 7,000-square-foot Houston restaurant is only the second ever opened. The atmosphere though seems more “Vegas” than “Baltimore.” It serves lunch and dinner on the weekdays and brunch and dinner on the weekends. Ouzo Bay’s menus feature seafood and Greek-inspired dishes that include classic mezedes (small plates traditionally served with ouzo), crudo and Ouzo’s crown jewel, the fresh fish market, where guests can choose from a dozen fresh seafood selections such as Hawaiian Kona Kampachi, Dover Sole and Royal Dorado.

Prices aren’t listed on Ouzo Bay’s website. Take that as a hint. Most of the current fish market selections range from $32 per pound for the Red Fish to $96 per pound for the Spanish Carabineros Prawns. The menu warns diners that cooking and serving times for fish can run about 30 to 40 minutes (an example cooking method is grilled with salt, pepper, a scattering of capers and drizzled with olive oil) but be prepared to wait a little bit longer as Ouzo Bay works through the normal opening kinks. For some seafood lovers, the fun of selecting their own fish and Ouzo Bay’s artful presentation might be worth the hefty price tag. Other diners might prefer to order from the array of smaller and more affordable plates.

From the list of classic mezedes, guests can dine on dishes such as the Wagyu Stuffed Grape Leaves with aromatic beef, rice, pistachio pesto and tzatziki and lamb meatballs with tomato sauce and feta cheese. Both are well-priced at $12 and $14 respectively and offer decent portions: enough for two to share. Unfortunately, the Pastitisio Spring Rolls, another mezedes selection, don’t work out as well. The bucatini with bechamel stuffed inside the fried spring roll was an odd flavor and texture combination that layered starch on top of starch.

The melitzanosalata, one of the house spreads and similar to baba ganoush, is a must for eggplant aficionados. The tzatziki on its own lacked the luster it had when paired with the grape leaves. Toasted pita comes alongside and our server helpfully pointed out that extra toasted pita is free. The spreads are $7 each.

From the bar, be prepared for the bill (at dinnertime, at least) to also pack a punch to the wallet. Two Old Fashioneds and a glass of wine — from a list curated by sommelier Evan Turner, formerly of Helen Greek Food and Wine — cost around $60. (That’s an average of $20 per drink, kids.) Here’s how to experience Ouzo Bay at a much more modest cost: visit for happy hour when mezedes range from $6 to $12 each and a half-dozen wine and cocktail selections only cost $7.

Here’s more good news. For those who don’t think Ouzo Bay is their cup of tea, they can hop over to Loch Bar next door. While Ouzo Bay has more of a Vegas feel, Loch Bar has an edgy, comfortable, speakeasy vibe, complimented by classic rock playing in the background (and as of press time, sometimes live musicians). The raw bar, touted as one of the largest in the city, offers guests diner-style seating with an up-close-and-personal view of the fresh shellfish selections.

On the dinner menu, must-have appetizers include the $10 deviled eggs with bacon, chives, truffle and espellete and moules frites, a $23, generously sized bowl of blue mussels with a choice of broths: one with beer, coppa picante, calabrese, tomato with leeks and ‘nduja, or a simpler garlic white wine sauce. The quantity of mussels is enough for two to share.

Loch Bar has a number of entrée-sized dishes, too, such as the $17 Loch Burger  made with a choice of beef or turkey patty topped with white cheddar, bread and butter pickles and Churchill sauce. The signature Maryland Crab Cakes, though, are a whopping $48.

Now, what do you drink with your seafood tower? The cocktail, wine and beer list at Loch Bar offers several good choices such as the Sonora Sunset with sotol, lemon, strawberry and lavender and The Olive Branch made with The Botanist gin, olive-infused vermouth and salt. However, whiskey fans should be sure to explore Loch Bar’s impressive selection. The current tally is just over 300 from Scotland, Ireland, Japan, Canada, and the United States, with prices ranging from $8 to $500 per serving. Loch Bar also recently launched a Happy Hour menu offering diners a chance to sample almost a dozen light bites for $12 and under.

With so many restaurants in the River Oaks District, only time will tell if Ouzo Bay and Loch Bar have the chops to survive one of Houston’s hottest restaurant scenes.