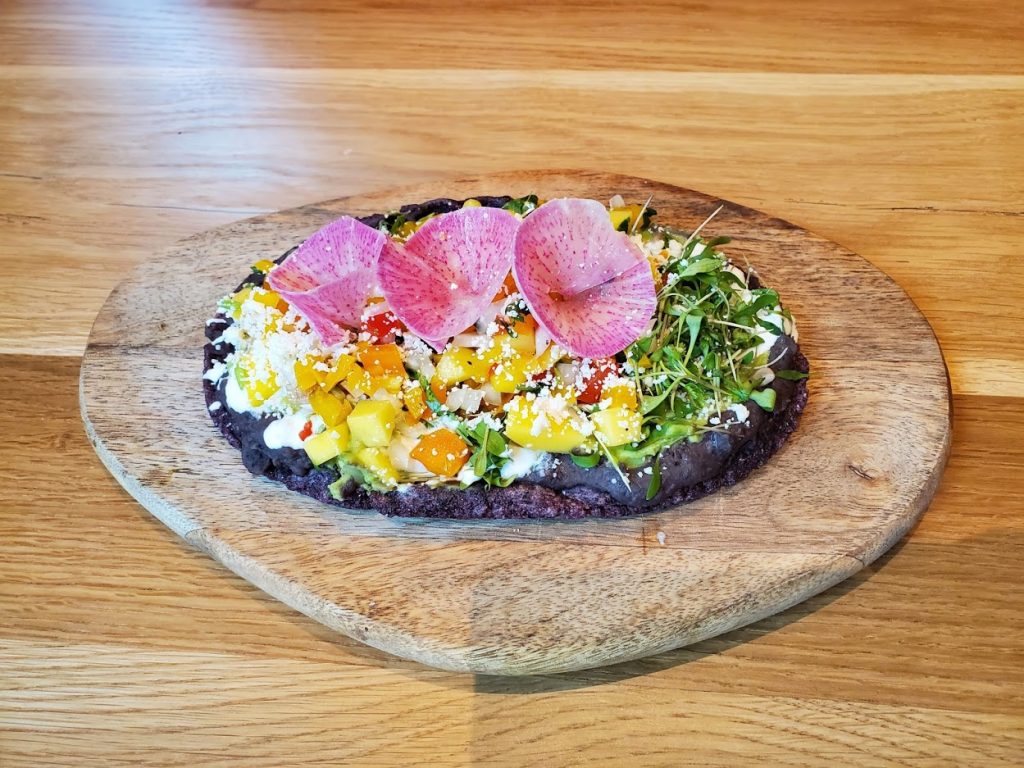 Tropicales at 2132 Bissonnet is a new, all-day café that opened on May 5 in the Boulevard Oaks neighborhood near Rice Village. It’s the latest endeavor from David Buehrer, owner of Greenway Coffee Company, Blacksmith and Morningstar (among other coffee-centric businesses), which he opened in conjunction with developers Steve and Hilary Ybarra. From this beautifully designed space resplendent with rich wood tones and muted pastels, they are offering Latin-inspired flavors, full-bodied coffee, and a varied selection of cocktails, craft beer and wine. As residents of Boulevard Oaks, the Ybarras believe the neighborhood will benefit from having a full-service restaurant with an outdoor patio.

“I’m excited to have this opportunity to provide a vibrant place where nearby residents and guests can spend their days enjoying great coffee, cocktails and food, as they would if they were on vacation.” said Buehrer. He said he’s been eyeing the location since back when it was still a convenience store.

Buehrer tapped Morningstar partner Carlos Ballon to be culinary director. Buehrer and Ballon originally worked together at Anvil Bar and Refuge nine years ago. In more recent times, they have teamed up on several projects. James Beard-semifinalist Pastry chef Jill Bartolome is serving as general manager and beverage consultant Kenny Freeman, former general manager of Julep, is responsible for the tropical-themed wine, beer and cocktail menu.

Ballon hails from Peru and the menu features the influences of his home country while also incorporating a dash of Cuba, a pinch of Cozumel and Oaxaca, and a couple of spoonfuls of the South Texas Gulf Coast. Additionally, there are dishes that satisfy many different dietary needs (such as gluten-free and vegetarian).

Fans of avocado toast who want to step up to a spicy, more colorful and flavorful breakfast will love the Pan Con Aguacate. A blue corn tlayuda is griddled then topped with refried black beans, creamy avocado, Cotija cheese, mixed seeds and a sweet-yet-spicy mango pico de gallo. “This is what avocado toast wishes it could be!” said Buehrer.

Those who enjoy ceviche will savor Tropicales rendition made with sushi-grade salmon, sweet mango, and sour red onion in a spicy jalapeño, lime, guava and coconut milk sauce. Served with plantain chips, it’s on par with the quality of ceviches found at Latin Bites. (After mentioning this to Buehrer and Ballon, they said they consider the comparison a huge compliment.)

For a taste of Miami, there is the classic Cubano sandwich. It’s made with a hot-pressed bolillo then loaded with black forest ham, roast pulled pork, Swiss cheese and pickles. The crowning touches are the spicy mustard with a piquant hint of horseradish and plantain chips on the side. If this spicy, crunchy, meaty sandwich was served on a national level, America would benefit from it.

Other dining options include breakfast tacos, egg and cheddar croissants, coconut yogurt and fruit, chicken or beef fajitas, grilled salmon, a 20-ounce 44 Farms ribeye and chips and queso. On the whole, the food from breakfast to dinner captures the essence of the Gulf Coast, Coastal Mexico and South America.

On the cocktail menu, Freeman has concocted libations with Mexican, South American and Asian influences. Some highly recommended drinks are The Avocolada, with top-shelf tequila blended with avocado, coconut juice and milk and key lime; and the Powers of Peru with pisco, bell pepper extract, lemon, agave juice and cava. The Avocolada tastes like a riff on a piña colada with tequila instead of rum while the Powers of Peru is a smoldering, sweet-yet-savory cooler.

The beer menu includes a few local craft beers, some Latin American imports, a rotating Hazy IPA and Shacksbury rosé cider. There is also a selection of wines available that changes regularly.

Last but not least, the coffee and tea menu features some of the greatest hits from Greenway, Morningstar and Blacksmith. One example is the Café Bombon, an inspired layered coffee drink that includes condensed milk on the bottom. It’s described as espresso-meets-cà phê sữa đá (Vietnamese iced coffee) and gets some heat from cinnamon. The tea selections include Golden Monkey, Celadon and Jasmine Pearl along with a Tumeric Chai Latte and standards such as chamomile and peppermint.