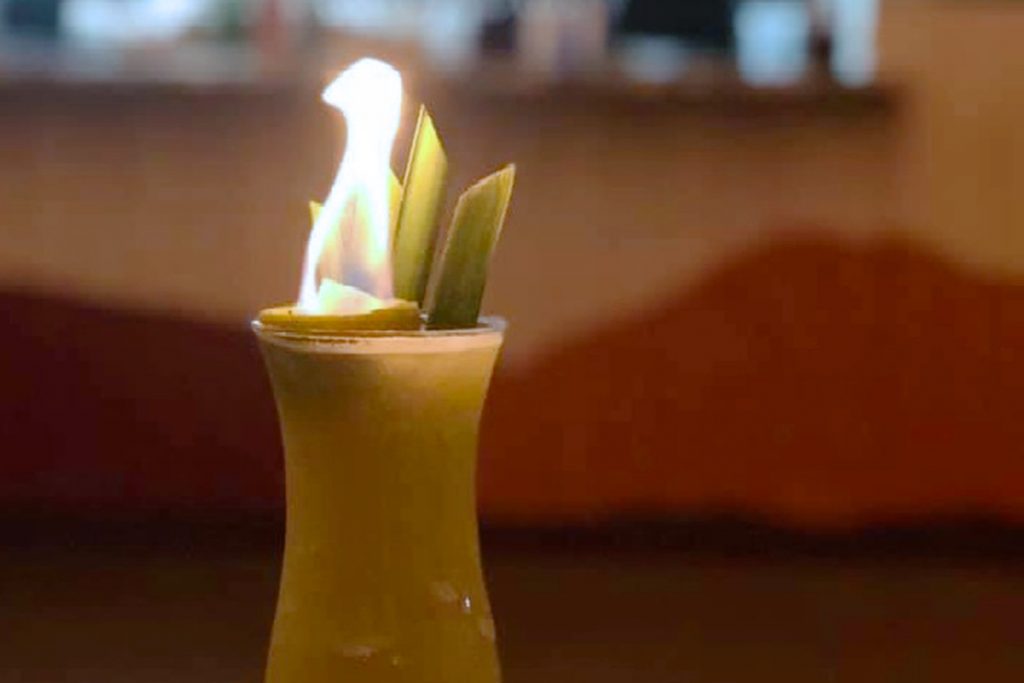 The flaming Slime in the Ice Machine. Photo courtesy of Lotti Dotti.

Lotti Dotti is a new patio bar and eatery in the former Brooklyn Athletic Club space at 601 Richmond in Montrose. Those who ever visited the latter know that one of the big draws was the ample outdoor space in both the front and back of the restaurant. That’s been retained by Lotti Dotti and those who worry about being outdoors in the oppressive Houston summer may be happy to know that sprinkler fans are being installed on either side of the long, air-conditioned bar.

Great drinks and patio space is nothing new to Montrose, right? Well, the duo behind Lotti Dotti — executive chef Adam Dorris and general manager Michael Riojas — are both bringing serious street cred. Dorris already knows Montrose; he was the original chef for Pax Americana (acclaimed by Pat Sharpe of Texas Monthly and Alison Cook of the Houston Chronicle, among others, during his tenure) and then left to open Presidio, which was closed after a fire in October 2018. For his part, Riojas built his résumé at the likes of Ladybird’s, Beaver’s and Goode Co.

Lotti Dotti joins the category of establishments such as Night Heron and Better Luck Tomorrow that aren’t just bars nor quite full-fledged restaurants. (There’s a term for that which originated in Chicago, “barstaurant” — and its fair to say it’s a mild trend in Houston now, too.) The food offerings lean heavily towards worthy bar bites but there is a small selection of larger plates, too.

The food menu is divided into four categories: the aforementioned Bar Snacks, Salty Meats, Cheese and Plates. Under the bar snacks, the marinated olives with paprika and lemon juice, house-cut fries with “garlic dijonnaise apple cider vinegar sauce” (whew, that’s a mouthful) and Black Currant Honey Chicken Wings are both shareable and satisfying.

Under the salty meats (which come in options of one for $8 or three for $20) and comes with a selection of bread, pickles and condiments, some winners include the pork rillette with white pepper, clove and coriander and the Napoli salami with black peppercorns. The cheese (also served solo or in trio choices for the same price as the meats) comes with bread, Rosemary Scented Cashews (also an item under the bar snacks), fruit and condiments with both soft selections like the whipped ricotta and aged choices like the Spanish-style Manos de Dios made from raw cow’s milk.

On the “larger plates” side of the menu, we recommend going for the carbs (yes, again) with the Crispy Smoked Potatoes made with crescenza, black garlic, chermoula and herbs (this dish can be eaten with a fork or a spoon). Late-night eaters are going to like Lotti, which serves food until close, which means as late as 2 a.m. on the weekends.

Those looking to beat the Houston heat with some frozen refreshment can choose from eight icy cocktails. Those include the flaming (yet not really appetizing-sounding) Slime in the Ice Machine made with tequila, cachaça, matcha, makrut, pineapple and lime; and the Froze Altuve with rose, mango, singani (a spirit distilled from grapes; akin to clear brandy), strawberry and lemon juice. Don’t let the prettiness of the frozen drinks fool you, while they go down smooth, they still pack a boozy punch.

Draft cocktails at Lotti come in three sizes: individual, carafe, and a group-sized punch bowl for $10, $33 and $66, respectively. The options include The Saturn Five made with Bombay Sapphire gin, Martini Rossi bitter, lime, watermelon and pineapple.

Among the eight house cocktails, the Texas Hammer (with lunaazul tequila, grapefruit, pink peppercorn, lime and jicama soda) and the Little Spoon (with sotol, marigold, blackberry and lemon) are high on originality and showcase fresh ingredients, such as Mexican mint marigold for the latter actually served in a little spoon. If cocktails aren’t what your group is looking for, there’s also a well-curated selection of wines by the glass as well as craft beer in draft, bottles and cans.

As parking can be challenging in this area, the Lotti Dotti team hopes to build a parking garage within walking distance. They also want to establish an herb garden to use in both the food and beverage menus.

Lotti Dotti is currently open from 3 p.m. to 2 a.m. Mondays through Fridays and from noon to 2 a.m. on Saturdays and Sundays.