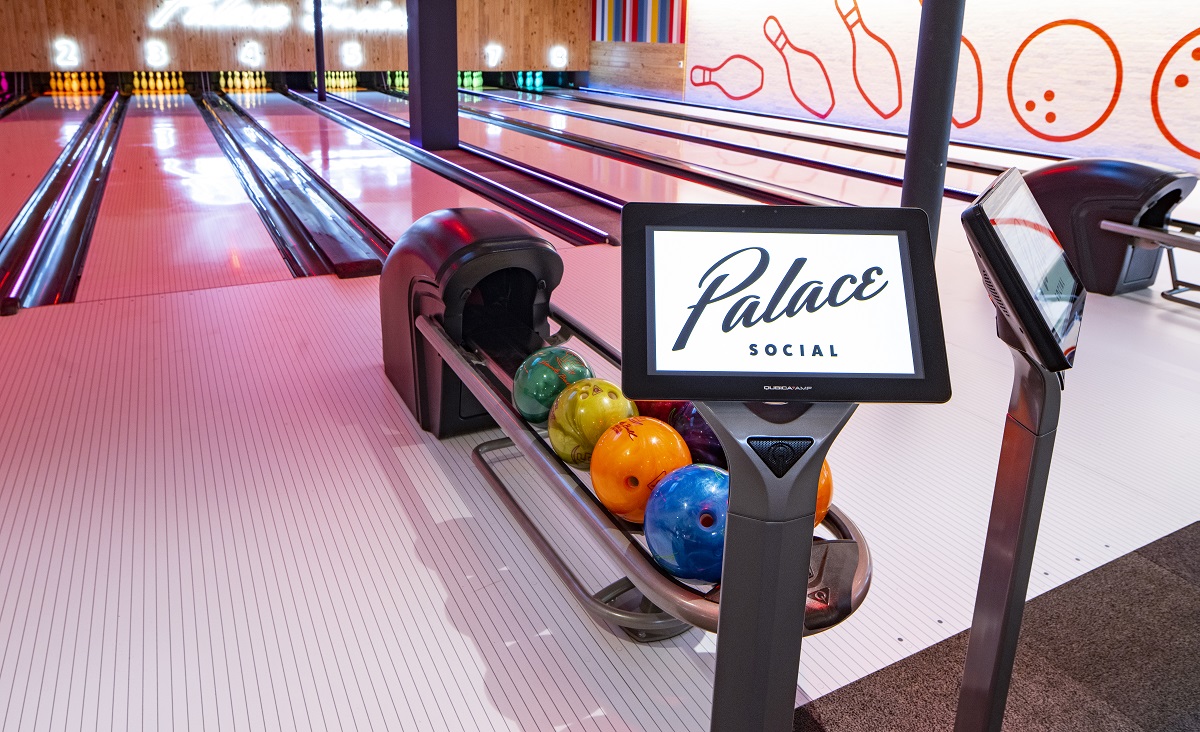 Palace Social offers games both high-tech and classic, such as bowling and more. Photo by Barry Fantich.

Palace Social is breathing new life into the Bellaire area’s shuttered Palace Bowling Lanes. Located at 4191 Bellaire, the multifaceted entertainment stop is now open and features bowling, a modern arcade, an esports lounge, golf simulators and a virtual reality arena. To keep gamers fueled, there is also a full-service restaurant — with a menu designed by well-known Houston chef, Ryan Hildebrand, formerly of Triniti and FM Kitchen & Bar — as well as an ice cream and dessert stand, and a bar for the over-21 set.

Efrain Villarreal, formerly of Tony’s Mexican Kitchen, is the onsite executive chef overseeing daily food and beverage operations. On the beverage side, Jennifer Caldwell (formerly general manager at Goodnight Charlie’s) was brought in to create the drink lists. Jonathan Horowitz of Convive Hospitality (formerly of Legacy Restaurants, which operates The Original Ninfa’s and Antone’s Famous Po’ boys), consulted on the project, working closely with CEO Billy Forney, a former energy company executive who moved into the high-tech gaming industry a few years ago.

Palace Social serves an eclectic mix of southern-inspired, American-fusion fare. Starters include variations on quesadillas such as RC Ranch Texas Wagyu steak with a Oaxaca/Monterey jack blend, wings, a take on Frito pie with Shiner Bock chili and a nacho plate dressed with Cuban sandwich toppings like pulled pork, ham and mustard. The menu also has a handful of customizable salads, a quinoa bowl and more than half a dozen flatbread pizzas, including The Bluebell with speck, Red Anjou pears, white sauce, arugula, blue cheese, and Texas honey.

There also eight different sandwiches including the BBLT with the extra “B” representing fried bologna, which is added to applewood smoked bacon, American cheese, lettuce, tomato, a house sauce, and two slices of Texas toast. The Palace Bowl Burger pairs Hereford ground chuck with bacon and cheddar gravy.

Hearty dishes round out the rest of the menu, including Italian favorites such as spaghetti and vegetarian lasagna, and southern comfort food like hand-battered chicken fried steak with sausage gravy and Breadman Co. Texas toast, and New Orleans-style BBQ shrimp and corn fritter biscuits served with pepper jack grits, fried okra sticks and grilled corn succotash.

Palace Social also features an standalone dessert bar with malted milkshakes, cookies, sundaes and brownies. Kids and adults alike should be well-entertained watching their orders being prepared through the glass windows.

Bowling alleys are known more for Jack and Coke than craft cocktails, but Caldwell’s drink list Palace Social shifts the paradigm. There’s a lengthy menu of cocktails, beer, cider and wine. Currently, there are three frozen drinks: a classic Margarita, a cherry limeade, and the Palace Bellini, made with Irish whisky, sparkling wine, peach and orange flavors.

The bar also offers a few chilled ranchwaters and highballs on tap. Plus, there are nearly a dozen classic and house cocktails on the menu. Classics include the Negroni and Manhattan, and there are also house specialties,  including Pale Russian, which combines vodka, chicory liqueur, vanilla and coconut milk, and the Social Club, which is similar to a raspberry daiquiri with aquafaba to give it silky texture. Guests can also ask for any spirit to be made into a sour or smash.

Beer, wine and cider fans are in luck. There is an extensive list of these, with heavy emphasis on local breweries. Selections range from pitchers of Saint Arnold Lawnmower and Houston Cider Company Cherry Cider to cans of Spindletap Hot Gusher IPA or Ace Guava Cider. There is something else not found in most bowling alleys: a large selection of wine by the glass and bottle.

Keeping to the spirit of its predecessor, Palace Social features eight colorful bowling lanes — modernized thanks to a computer-controlled pin reset system. The arcade room also keeps step with current trends and is filled with electronic, ticket-based games. Much like other arcades, the tickets accumulate on the player’s cards and can be traded for prizes. Mixed in with these are a handful of driving and shooting games.

The centerpiece of the game room is a full-body VR arena. Players positioned on small platforms are put into various battle scenarios. Other attractions include rooms housing video golf simulators and an interactive, theater-style ride that’s akin to a mini-version of the Soarin’ Around the Word ride at Disneyland. Finally, Palace Social touts one entire room dedicated to PC gaming and esports, with several professional-grade computer and seating setups.

Palace Social’s hours of operation are Sunday through Thursday from 3 to 10 p.m. and 3 p.m. to midnight on Friday and Saturday.