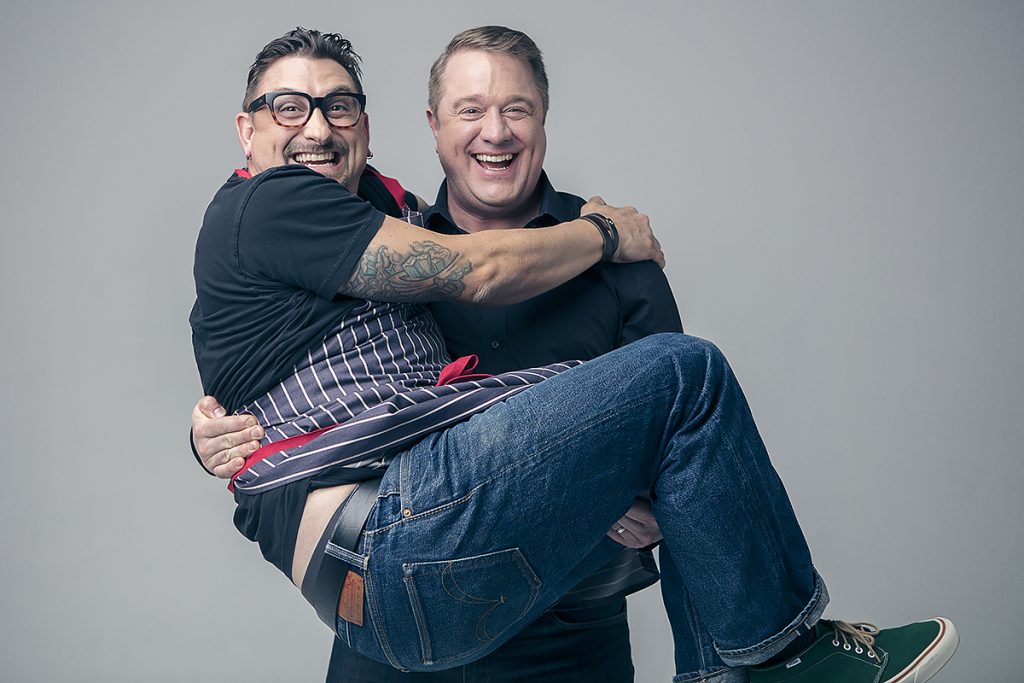 Chef Chris Cosentino, a West Coast restaurateur and Top Chef Masters winner who first came to prominence with his original restaurant, Incanto in San Franciso (now closed), has since opened three new eateries on that side of the country. These include Cockscomb, also in San Francisco, Jackrabbit in Portland, Oregon and Acacia House at Las Alcobas, a Luxury Collection Hotel in Napa Valley. As announced yesterday at a press conference at The Hay Merchant, he’s now got a restaurant planned for Houston. It’s an “Italian soul” restaurant named Rosalie and it’s being called “his most personal” concept to-date. Cosentino is opening it along with business partner Oliver Wharton.

Cosentino happened to be in Houston anyway for the announcement, as he was participating in chef Chris Shepherd’s new Southern Smoke Spring fundraiser series, which just concluded yesterday. Rosalie is named for Cosentino’s great-grandmother, a first-generation Italian immigrant. According to a press release, the chef credits her for inspiring his cooking career.

“Rosalie taught me how to hand crank pasta,” said Cosentino via a press release. “That was my job at her house. She would hand-dry all the pasta on coat hangers in the kitchen. She had a full basement in her three-story tenement in New York filled with tomatoes that she’d jarred and canned herself. Everything was personal, and she did everything by hand. She’s the inspiration for this restaurant and my inspiration my entire career.”

The 145-seat restaurant is slated for the C. Baldwin Hotel at 400 Dallas in Allen Center and, thanks to its location, is serving breakfast, lunch and dinner. Actually, according to the press release, the effort is far more ambitious than just opening a restaurant, as Cosentino and Wharton are in charge of all food operations for the hotel. This includes “a grab and go counter, room service (dubbed “Delivery”) and all private events and meetings in the hotel.”

Rohe Creative is in charge of design and the company is taking inspiration from Rosalie Cosentino’s 1970s kitchen. Some kitschy design elements from that decade include inset retro televisions, vinyl records displayed on walnut shelving and old stereo receivers. Other features include a family-style dining table and Murano glass chandeliers sourced from Italy and modified for the space.

As might be expected by the “Italian soul” description, Rosalie’s menu is showcasing red-sauce dishes as well as pizza and specials such as hand-pulled mozzarella and lasagna.

Cosentino is also working on dishes that take some inspiration from Houston. Some examples are Blue Crab Manicotti and Crab Sauce Américaine and wood oven-fired Gulf Shrimp Fra Diavolo.

Annie Balest is the general manager and for patrons of Tony’s or the now-closed Vallone’s, she’ll serve as a familiar face on the scene. A decade ago, she worked with Wharton to open Las Vegas restaurant Jaleo.

William Sherer, a master sommelier who is wine director for Cosentino and Wharton’s other endeavors, is tasked with developing a 100-bottle list that’s described as “fun and value-driven.” Sherer’s list is not only being served throughout the restaurant but is available at the C. Baldwin hotel’s bars and via room service. The cocktail focus is on classic Italian concoctions and is including multiple Negroni variations.

The C. Baldwin Hotel is replacing the current Downtown Doubletree in June and the new hotel is celebrating an official grand opening October 10. Rosalie is slated to open in September. Yes, that means there’s a gap in between over the summer, but interested diners can keep up with progress via Rosalie’s Instagram account for the most current information.

Houston Food Finder15 hours ago
Dining in Houston is full of surprises — and delicious ones at that. Cindy Wang introduces us to one such discovery in the form of a tucked away gem in Montrose. Read more about her experience at Quiote, a magical destination for Mexican bites and drinks.

Houston Food Finder1 day ago
Tickets are still on sale for La Nuit du Caviar and there are just 20 tickets discounted exclusively for Houston Food Finder readers remaining! Use code HFF15 to receive 15% off each individual ticket. Available until the tickets are sold out. This exclusive new tasting experience comes from DR Delicacy, the fine foods purveyor that brings us The Truffle Masters every year. It is an extravagant celebration of one of the world’s most coveted foods, along with luxurious accompaniments to create a remarkable and memorable evening. Tickets are limited to just 350 VIP guests. Each includes over 15 caviar dishes prepared by some of the city’s finest chefs, plus Champagne, vodka, fine wines, ice cream, a macaron bar and more! Visit the website today for more information and to secure your ticket.

Houston Food Finder1 day ago
ICYMI: New restaurant El Venado in the Washington Corridor dishes up simple, well-executed Mexican mainstays in a fresh and modern space. There are intriguing cocktails, too, and an inviting patio. Read more from Minh Truong below.

Houston Food Finder2 days ago
The new location of Mala Sichuan recently opened in the Heights with tried and true dishes plus exclusive new bites and drinks. Examples include Mayo Chicken and braised eggplants in spicy garlic sauce, with cocktails named for animals of the Chinese zodiac like Crystal Dragon and Friendly Tiger. The interior is equally impressive, with a pagoda roof made in Sichuan. David Leftwich shares more.

Houston Food Finder2 days ago
ICYMI: Georgia James, the sleek steak and seafood house in Montrose, has a new rooftop patio and bar. Guests can spread out on tasteful patio furniture, or head inside to the contemporary bar and lounge complete with its own menu. Learn more below.

Houston Food Finder2 days ago
The fifth location of Houston Chinese restaurant Mala Sichuan has opened in the Heights with a jaw-dropping interior and menu to match. David Leftwich shares details on new and familiar dishes along with one-of-a-kind decor, all of which are likely to leave diners wanting more. Click below for the full story!