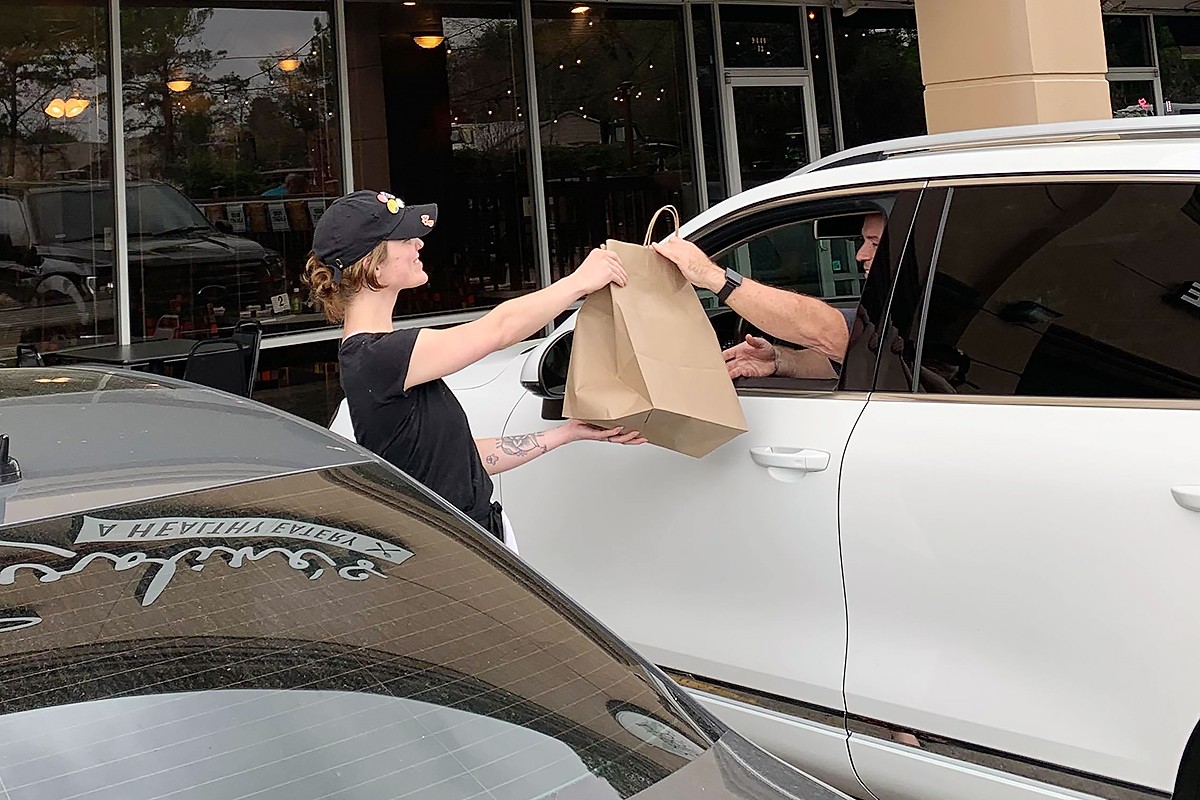 A customer takes advantage of curbside pickup at Caroline’s - A Healthy Eatery in Spring, Texas. Photo by Caroline Cobell.

This morning, the White House announced that the $350 billion earmarked for the Small Business Administration’s Paycheck Protection Program (PPP) is completely depleted. In addition, the separate Economic Injury Disaster Loans (EIDL) is also low on funds. This means many Houston-area restaurant and bar owners will continue to endure difficult financial situations. They will be facing tough decisions about how to help their employees, make lease payments, pay utilities and vendors, or even be able to pay personal bills. Though many of them have transitioned to delivery and takeout, that income has not made up for losses caused by closed dining rooms and stay-at-home orders. Many had applied for and hoped that these new federal programs would provided much needed relief but many have not even had a status update on their loan applications, much less received any money.

“I have applied for the EIDL as well as the advance and the PPP. We have received a total of ZERO dollars,” wrote Caroline Cobell of Caroline’s — A Healthy Eatery in Spring. “I applied as soon as the portals were open. I have no clue how they are determining who gets funds and who doesn’t. It’s definitely not in our favor. My bank has told me our application has been in pre-underwriting for a week.”

“We applied for the EIDL via the SBA [Small Business Administration] portal online but were not able to do it for the PPP. We have been ‘in line’ to submit the application for a few weeks,” said Robin Nouu, owner of Robin’s Snowflake Donuts & Café in Spring. “Yesterday, they sent an email saying that we are next in line now able to apply online. It’s extremely frustrating. No communication from the SBA or our bank.”

Thomas Tang of Samurai Noodle did get some communication from Chase Bank today — but it wasn’t good news. It was a call confirming that there was no more loan money available and his request would not be funded. That’s despite the fact that he applied on the first day when it was possible to do so.

Ashok Rao, owner of Songkran Thai Kitchen in Uptown Park, is another owner who applied as soon as possible, but to no avail. “I was one of the very first to get my PPP application into Chase Bank. I was told by the Chase SBA banker that it was the most thorough and complete application she had worked on. She said it was all set and I should see my loan in a few days. That was last Wednesday — eight days ago — and I’ve heard nothing more. I have not met anyone — not a single soul — who claims to have received their loan. My question, to paraphrase Peter, Paul, and Mary, is: ‘Where have all the PPP gone?'”

Initially, when the CARES Act — which established the PPP and EIDL programs — was passed, the apparent congressional intent was that the loans were intended for small businesses with fewer than 500 employees. However, the SBA issued interim rules that opened up approvals to restaurant and hotel chains with no more than 500 employees per location. Subsequently, large chain restaurants received huge sums from the PPP funds. Ruth’s Chris Steakhouse received $20 million in loans, and Potbelly got $10 million.

Some small, independent restaurant owners now believe that the odds of getting help from the government were never in their favor. “The SBA’s interim rules opened the floodgates to large chains with good lawyers and multimillion dollar relationships with banks,” said Gerry Sarmiento, owner of Mezzanotte in Cypress. “Under this scenario the process was way more heavily weighted towards chains. I can’t imagine any ‘small’ restaurant having 499 employees in a single location.” Like many others, Sarmiento applied for help and has not even received an update from his bank on the status of his application.

These issues come on top of the fact that the Paycheck Protection Program was never a good option for many Houston-area restaurants and bars in the first place. On March 16, Harris County judge Lina Hidalgo ordered bars and restaurant dining rooms to close to help reduce the spread of COVID-19. The only option left for restaurants was to switch to pickup and delivery. These meant many owners had to immediately layoff staff in response to drastic cuts in revenue.

However, one requirement of the PPP is that recipients have to retain staff. Considering that owners have no idea when they’ll be allowed to return to full service and have already laid off employees, the program may not be much help to many. What’s really needed to keep restaurants and bars in existence until restrictions are lifted is money to pay bills.

Furthermore, multiple Houston restaurant owners, including Nouu, told Houston Food Finder they were stymied by the bank tactics described in an article on the SmartAsset website: “Even before it, borrowers were being blocked by bank restrictions, such as needing already to be a business customer with an existing deposit or loan account. Some banks were requiring applicants to have a bank account and an existing loan, business credit card or business line of credit.”

Will there be any more funds granted for distribution by the SBA, and will they be strictly allocated to actual small businesses instead of big corporations? Right now, no one knows. Democrats and Republicans are currently deadlocked over the provisions of a new funding bill. At this point, it seems that every business and organization is desperate for cash. Even state governors of both parties are asking for money to keep their strapped administrations afloat.

With emergency loan funds dried up, some of the best help restaurant owners can receive right now is from customers, who still have financial resources, to  place orders for delivery and to-go, and from various grassroots efforts aimed at helping hospitality employees.

Houston Food Finder with Houston Cider Company.24 hours ago
Show your Pride and support the Montrose Center, which offers health and social services to LGBTQ community members and their families. Proceeds from taproom sales of Prider, Houston Cider Company's raspberry-lemonade cider, will be donated to the clinic. This very limited, seasonal release is made with real Michigan raspberries and fresh lemon peels from California. Prider is also sold in six-packs at area retailers such as H-E-B, Total Wine and Specs, and by the pint in select Houston bars and restaurants. “We are proud to be a part of one of the most radically diverse cities in America and we are celebrating with a special release that's as vibrantly & beautifully made as our community,” says owner Justin Engle. Click the link to view the entire cider selection and to buy online!

Houston Food Finder with Phat Eatery.4 days ago
Celebrate Dad with three anniversary specials at Phat Eatery — one for each year that the restaurant has been open! The specials from June 19 through 30 are: draft beers and hot sake for $3 each, buttery, flaky Roti Canai with curry dip is $3 per order and, for to-go only, Curry Crawfish are “buy two pounds, get one pound free” at $4.99 per pound. Of course, you can grab housemade Malaysian ice cream by the pint and other delights, too. Visit for dine-in or choose takeout and delivery. Visit the website or call (832) 913-6382 for more information.

Houston Food Finder4 days ago
Only 9 of our inaugural Goodie Boxes are left, and home delivery starts next week! Get one before it disappears, receive over $200 of gifts from Houston restaurants, drink producers and other small business, and support local food journalism at the same time! Houston-area only. Click the image and get the box for a one-time support of $150 via Facebook, or visit this link and choose PayPal or the $31-a-month option.