Drink Specials & Dish Deals in Houston for the 2019 Astros Playoffs 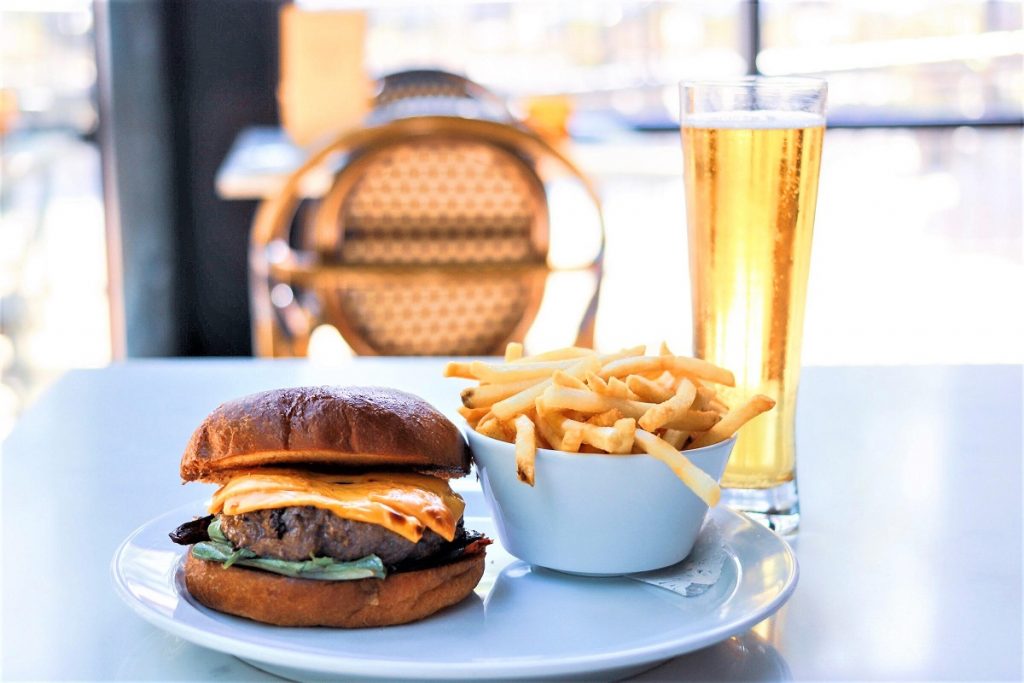 The Burger Maison at Brasserie du Parc comes with French fries and a beer for only $10 during Astros home games. Photo by Paula Murphy.

After a Major League best 107-win regular season and defeating the Tampa Bay Rays in the American League Division Series, the Astros are hosting the Yankees in the American League Championship Series. Restaurants and bars across the city are hosting watch parties and offering specials, and I’ve put together some of the best for you. Whether you’re focused on food, drinks, or just catching the game in a great sports bar, there’s something here for everyone.

Bernie’s Burger Bus, multiple locations: It’s buy one, get one for $2 gourmet franks at Bernie’s Burger Bus tonight. Choose between the $7 Chili Dog with house chili and green-chili queso, the $7 Rock-the-Guac Dog with guacamole and chipotle aioli or the $8 Brisket Dog with BBQ beef and get a second dog for only $2 — a steal. All Texas craft beer pints are only $4, making two hot dogs and a beer cheaper than catching Dollar Hot Dog Night at Minute Maid Park, all while getting bacon-wrapped 44 Farms dogs.

Biggio’s, 1777 Walker: A quick five minute walk from Minute Maid Park, Biggio’s is always a great choice to catch a game. Aside from the chance of a handshake or photo with the always-friendly Craig Biggio there, the environment is spacious and upscale. With over 30 TVs and two 30-foot tall screens to catch the game on, every seat is a good one. It’s a sports bar, sure, but the menu is miles beyond standard chicken strips and hot dogs. Chicken and Waffles, Patty’s Melt (named after Biggio’s wife, Patty) and Loaded Nachos that can be shared by a group of four barely scrape the surface of what’s available.

The Branch, 7710 Long Point: Are you already a “Branchacho”, owner Kyle Pierson‘s term for regulars of his Spring Branch bar? Whether yes or no, head over for cold beer, delicious food, and full sound for Astros playoff games. The Branch also has a large patio with TVs out front, so you can take full advantage of this amazing weather while it lasts. You thought baseball food was only hot dogs and burgers? Order instead Pierson’s Vindaloo Frito Pie — ground lamb in a spicy curry sauce served over corn chips — and you’ll definitely be needing some beer afterward. The chicken fried steak here is also very worthy.

Brasserie du Parc, 1440 Lamar: For only $10, guests at this downtown restaurant can grab a burger, French fries and a beer at Brasserie du Parc. The Burger Maison is an eight-ounce patty with lettuce, tomatoes and cheese on a brioche bun. Don’t feel like a burger? No problem! The Crepe Dog is a lamb sausage wrapped in a crepe and topped with tomato confit and spicy harissa sauce, and is also served with French fries and a beer or glass of wine for only $10.

The Hay Merchant, 1100 Westheimer: Houston is lucky to have a gastropub like The Hay Merchant, which features a consistently stellar beer list in addition to fantastic and surprisingly affordable bites. When a Houston team is winning, all Houston beers are half off. The Yankees are no slouch, but the Astros are the best team in baseball and have home field advantage throughout the series, so let’s see if we can drink them out of Houston’s best craft beers.

HTX Fan Tavern, 1800 Texas: Head to this bar conveniently located directly across from Minute Maid Park for “cold A/C, cold beer, and Jell-O shot specials”. The location makes it a great pre-game choice for anyone attending the official Minute Maid Park watch party as well. Complimentary entry tickets can be reserved on its Facebook page.

Lucky’s Pub, 801 Saint Emmanuel: Calling Lucky’s watch parties “watch parties” is the definition of underselling. Five projection screens, over 60 HD TV’s and the largest jumbotron in the country all showing the Astros makes for an epic watch party. Add food from its normal menu — in addition to five food trucks — plus Jim Beam, Jagermeister, Tullamore D.E.W. and Crawford Bock drink specials for each game and Lucky’s has your group covered. I recommend using a rideshare service such as Uber, because parking will be extremely limited.

R Bar, 1302 Houston: This gem in the Washington area has quickly become my local bar, even though I don’t live anywhere close. Come here for Astros on all of the TVs plus on the patio as well with sound and free Jell-O shots for every Astros homer. While there, take advantage of the surprisingly good beer selection and whiskey drinkers will surely notice a few uncommon bottles. R Bar doesn’t serve food, but often has food trucks on-site and always allows outside food.

Houston Food Finder1 hour ago
Thanks to a fully fledged restaurant serving a menu created by Ryan Hildebrand and overseen by Efrain Villarreal Jr., as well as a freestanding ice cream stand and bar for the over-21 set, gamers who visit The Palace Social can be well-fueled and play for hours. Ryan Kasey Baker visited and has the details on this new, fun destination for kids of all ages.

Houston Food Finder with Roma Ristorante.7 hours ago
As always, Roma Ristorante is participating in Houston Restaurant Weeks 2021! Journey to Italy with a three-course dinner for $35 per person. Three dollars from each goes to the Houston Food Bank. Selections include vegetarian and gluten-free dishes. Choose from starters such as creamy Imported Buffalo Mozzarella With Housemade Pesto And Mixed Greens, crispy Fried Shrimp And Calamari With Marinara And Artichoke Sauce and hearty Meatballs With Cheese And Basil. The second course includes pasta options like spicy Orecchiette With Housemade Italian Sausage (a specialty of Chef Scarafile) and Strozzapreti with Fresh Shrimp and Housemade Pesto. Entrées include earthy Eggplant Parmigiana, Chicken Breast Stuffed With Prosciutto And Grana Padano and decadent Veal Scaloppine. Pair your meal with a selection from our extensively curated wine list. Reservations are encouraged but not required. Visit the https://romahouston.com/ for the full menu, or call (713) 664-7581 for more information.