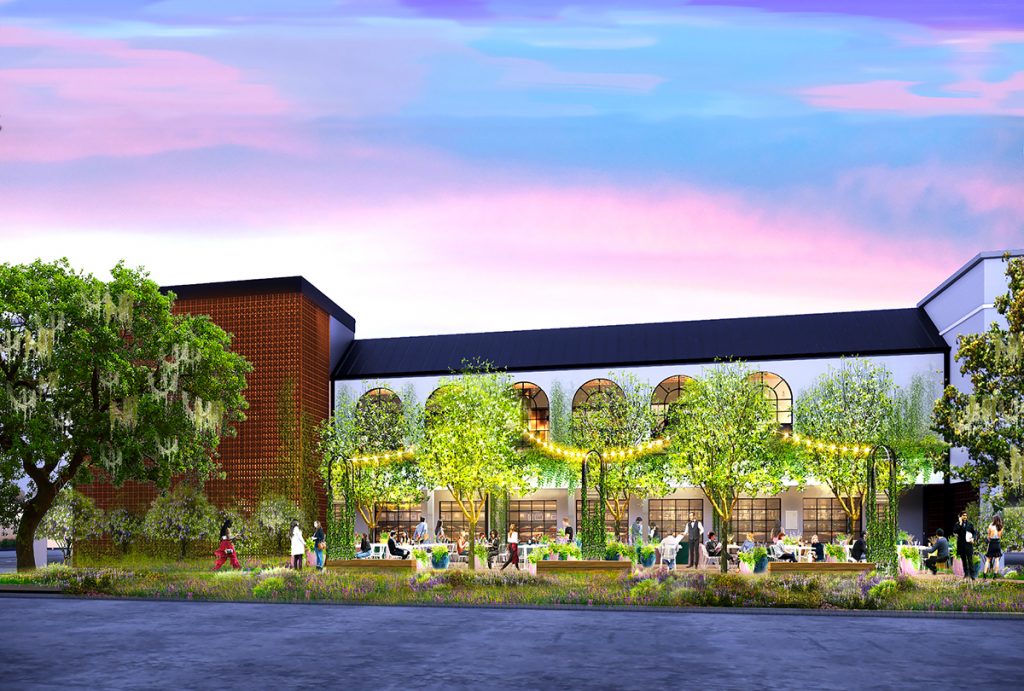 A rendering of the revitalized area at 5555 Morningside where new Israeli restaurant Hamsa will reside. Photo courtesy of Edge Realty Partners.

With the recent opening of new food hall Politan Row and a revitalized Benjy’s, the redevelopment of Rice Village is well underway. Now, an area that was once a row of bars at 5555 Morningside is undergoing a multi-million dollar revamp to house a spacious new restaurant from the owners of New Orleans-style steakhouse Doris Metropolitan.

Called Hamsa and tentatively expected to open in the summer of next year, it is planned as a “modern Israeli restaurant” and the name means “five” in Arabic. Additionally, a hamsa is the name of a protective symbol with multicultural origins. As is the trend in restaurants, Hamsa is planned as “upscale-casual”, which these days usually means nice food without a big need to dress up for it.

This restaurant is going to be uniquely personal, as owners Itai Ben Eli, Itamar Levy and partner-executive chef Sash Kurgan are from Israel. “Modern Israeli cuisine is just like the country of Israel itself,” said Kurgan via press release. “It’s a melting pot of traditional Jewish food from all over the world, along with the local Arabic food of the region. Its diversity creates a rich palette of tastes and aromas that I’m very excited to share with Houston.”

The team points out that while Hamsa is the first of its kind in Houston, modern Israeli fare is an emerging trend nationwide — not to mention wildly successful in a few cases. Shaya in New Orleans won the James Beard Best New Restaurant award in 2016 before its namesake chef, Alon Shaya, left BRG Hospitality (formerly Besh Hospitality Group) to open Saba. Zahav won Outstanding Restaurant this year, after its chef and pastry chef won awards in prior years.

The cultural perspective is guiding the wine program as well. “Many people don’t know that Israel produces amazing wine and spirits,” said Ben Eli. “The production is so small that it rarely makes its way to the U.S. market, but Hamsa will be a showcase of the best.”

According to senior investment associate Morgan Lera, Hamsa fits Rice Management Company’s goal of adding new businesses to Rice Village that are new and unique but still complement the area’s mainstays. For the owners of Doris Metropolitan, the expansion opportunity was the right place at the right time. “When we began talks with Itai, Itamar, and Sash back in April, they didn’t have any expansion plans in the works,” said Burdette Huffman, principal of Edge Realty Partners. “However, after several conversations about our vision for the future of the district, it was evident that they were going to be a part of that future.”

While many details, such as dishes, price points and other aspects, are yet to be revealed, Hamsa is expected to open daily for lunch and dinner.