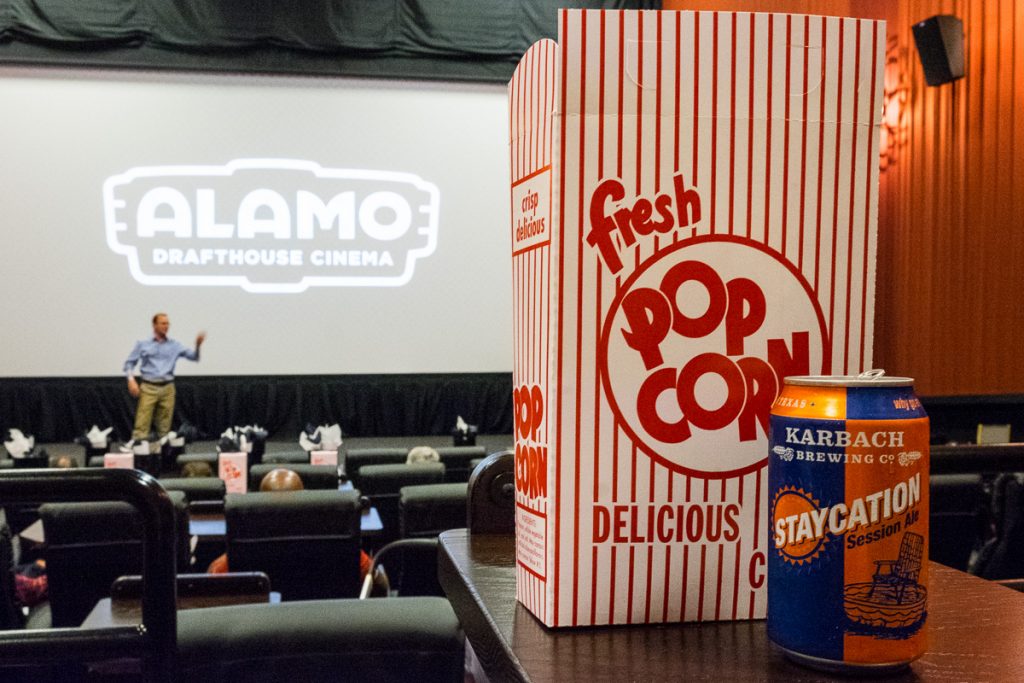 A view of one of the Alamo Drafthouse Cinema auditoriums at the La Centerra location in Katy. Photo by Phaedra Cook.

Alamo Drafthouse Cinema has announced it is filing for Chapter 11 bankruptcy due to pandemic-related financial losses. The Texas-based theater chain, which started in Austin in 1997, offers moviegoers an experience that includes food and beverages, including craft beers, served directly to their seats. It was one of the first theaters to offer that level of service. There are now locations in over 20 cities across the United States.

Alamo Drafthouse has made multiple attempts to expand in the Greater Houston area, but has struggled to achieve that goal. Its initial location in the area, and the longest-running, was at West Oaks Mall. It was followed by a Katy location on Mason Road.

When the West Oaks location shuttered on June 25, 2012, Alamo Drafthouse reemerged in the Vintage Park shopping center in Northwest Houston. That one did business for a few years before being bought by Star Cinema, another dine-in theater chain. In the meantime, the Mason Park theater — which by then was showing its age — was shuttered in June 2018 in favor of a newly built outpost in the LaCenterra mixed use development. It features state-of-the-art digital movie projectors, a bar area and spacious lobby.

Other proposed locations in the area have yet to open. An eagerly anticipated Montrose theater was canceled. A League City location, which was announced last February, has yet to open its doors. Plus, ground was broken on an Alamo Drafthouse in Sugar Land near the historic Imperial Sugar factory, but the build out was not completed before the COVID-19 pandemic struck, which diminished revenues and slowed expansion for the chain.

As cited in Forbes, the cinematic landscape in the United States is in flux because consumers haven’t been visiting indoor theaters due to COVID-related mandated closures and personal safety concerns. Instead, viewers have been relying even more on at-home streaming services, which were changing American’s viewing habits before the pandemic. However, Alamo co-founder Tim League says that he is optimistic about the cinema’s future, and the sale of assets should create the financial liquidity needed to bolster Alamo Drafthouse long enough to serve a vaccinated, movie-going public and, according to Variety, keep most of the current locations open. Hopefully, that includes the one in Katy.

Perhaps this new financial direction will also give the company flexibility to reconsider its Houston-area footprint. 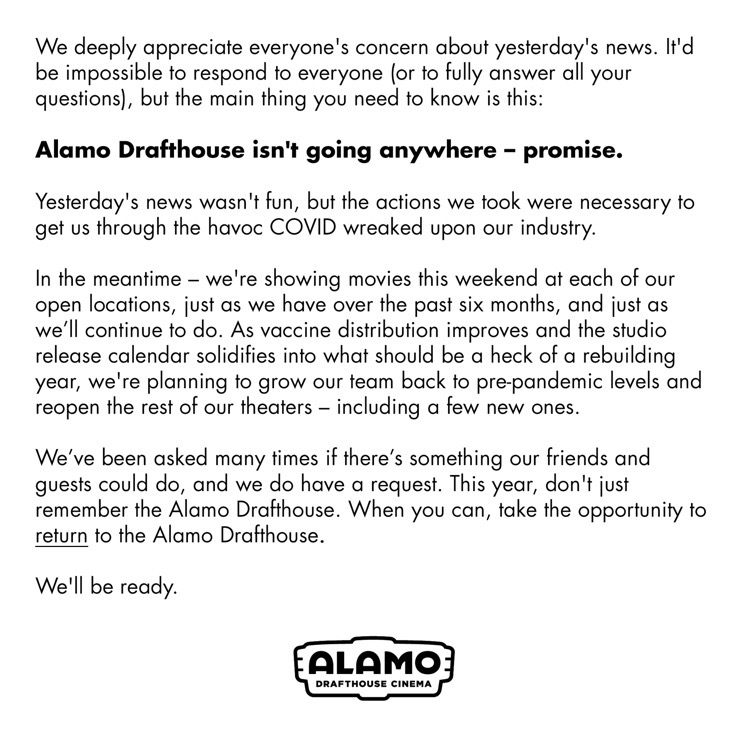 Houston Food Finder14 hours ago
Hai Hospitality, (which owns Uchi Houston), has revealed which chef is leading Loro Houston. It's the third location for the collaborative restaurant from Aaron Franklin and Tyson Cole — and will be overseen on a day-to-day basis by a chef with a long working history in the Greater Houston area.

A chef with a long history in the Greater Houston area has been tapped to lead the Houston location of Tyson Cole and Aaron Franklin's Loro.
20 4    View on Facebook

Houston Food Finder15 hours ago
Starting Saturday July 31, Saint Arnold Brewing Company is offering two tours of breweries per month guided in Spanish. Want to attend on a different date? There are options for you too. Click on the article link for more details.
#cervezaartesanal #cervezahouston #houston #multicultural #espanol

Houston Food Finder16 hours ago
Event Alert: Perhaps some of you ladies have already been collecting your annual ficheras at Cuchara Restaurant in Montrose? If not, there are still a few days left before the adults-only final party this Friday: https://houstonfoodfinder.com/event/ficheras-party-cuchara/

This is also a great time to thank Staci Davis, who's in charge of maintaining our events calendar. :) More August events coming soon!

For every drink you buy or someone buys for you, Cuchara will give you a “ficha” (token). Save as many as you can and come to our Ficheras party to trade them for food, drinks, trinkets and prices. They have already started giving fichas and will continue to do so until July 31! Cuchara will [.....
View on Facebook

Houston Food Finder with Harold's Restaurant, Bar & Rooftop Terrace.16 hours ago
When you crave crispy, tender and juicy fried chicken, Harold's Restaurant, Bar & Rooftop Terrace in the Heights has you covered! Start with The Chicken or The Egg, a deviled egg topped with a fried chicken bite. Must-try entrées include the Buttermilk Fried Chicken and Fried Chicken and Mash; each are served with fresh sides. The Sunday brunch specials include Fried Chicken & Waffles, and the hearty Big Nasty Biscuit — a fluffy housemade biscuit stuffed with a fried chicken breast, white cheddar cheese and sausage gravy. There is even vegetarian-friendly Chicken Fried Cauliflower presented perched atop a bowl of cheese fondue. Order for dine-in, carryout and delivery. Visit www.haroldsheights.com or call (713) 360-6204 for more information and to order.