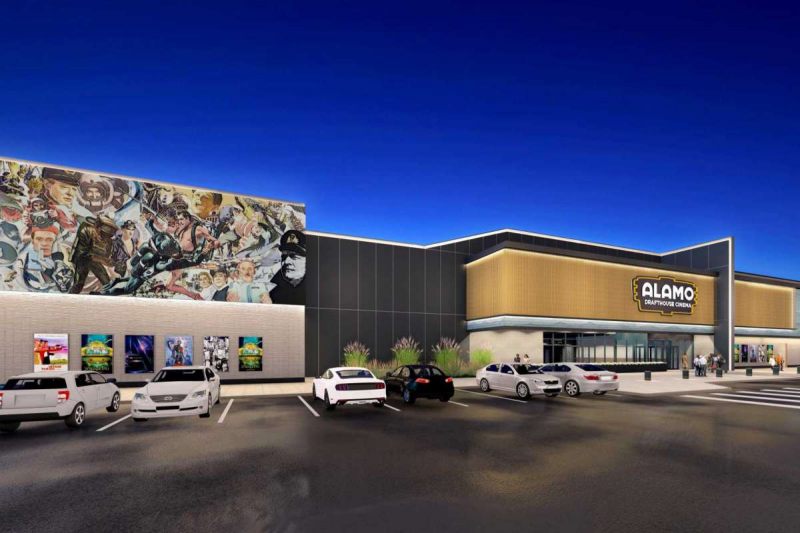 A rendering of the forthcoming Alamo Drafthouse Cinema in League City. Courtesy photo.

Ever since Alamo Drafthouse Cinema opened a brand-new theater in Katy in mid-2018 to replace the old one on Mason Road, and closed its Vintage Park location, fans have eagerly awaited news on additional locations in the Houston area. Although one in the long-awaited Regent Square center near Montrose was announced, as we previously reported the lease was terminated. Another long-teased outpost in Sugar Land is obsensibly still under development, although a company representative declined to give an update on its progress. However, the announcement of a new location in League City indicates that, at last, franchiser Triple Tap Ventures is taking a solid step towards expansion in and around Houston.

According to a blog post, Alamo Drafthouse anticipates opening the new League City location at the Victory Lakes center on the North East corner of I-45 and FM 646 around the end of the year. The new facility will sport 10 screens, including a huge 60-foot display called the “Big Show,” with laser projection and Atmos surround sound. Other perks include luxury recliners, reserved seating and a layout that gets rid of any headache-inducing front row right next to the screen.

Of course, the new League City location is also going to offer the big benefit upon which Alamo Drafthouse built its brand: in-theater food and beverage service. Diners can order various housemade dishes as well as over 40 draft beers and a selection of cocktails right from their seats. Before or after the movie, guests can hang out in the lobby bar and order the same selections.

Alamo Drafthouse is an Austin-based movie theater chain, but it has a long history in Houston. Here’s a brief history of the company’s presence in the area:

Alamo Drafthouse was a trailblazer in offering moviegoers the ability to order from a full menu directly from their seats. There are other special touches, such as big bowls of popcorn dressed in real butter (not butter-flavored oil) a good selection of local craft beers, special movie-themed food and drink events and limited-time menu items.

Visit the Alamo Drafthouse website to view the full announcement and additional details about the forthcoming League City location.