Cordúa Group Revamps Américas In The Woodlands
Into A Churrascos 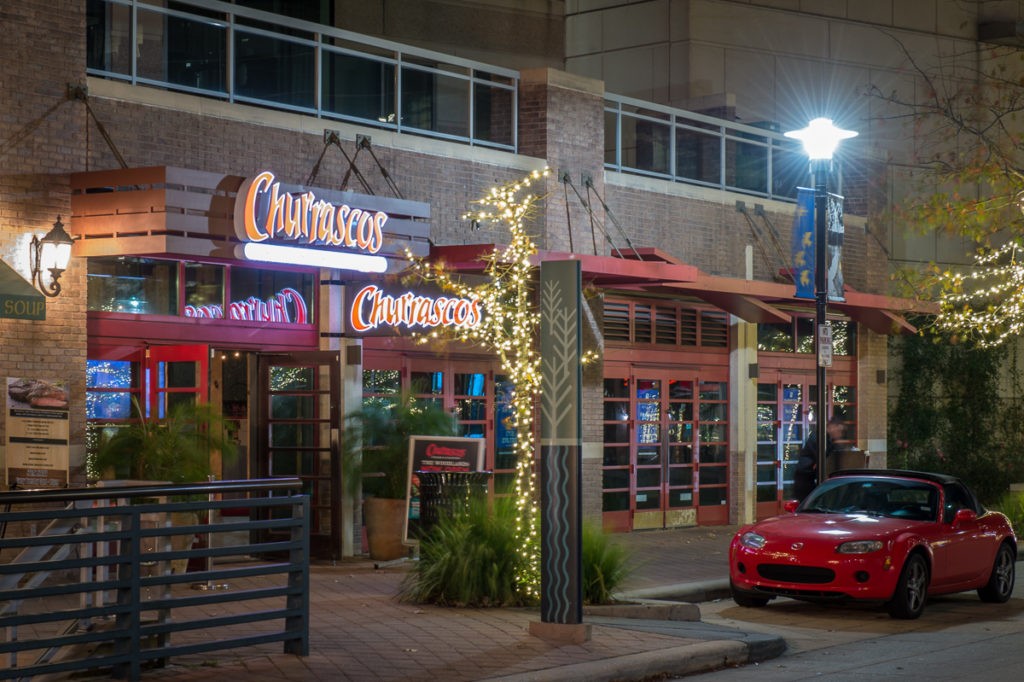 Churrascos in The Woodlands, one of the many owned by Cordúa Restaurants.
Photo by Chuck Cook Photography

It’s not uncommon for long-established, successful restaurants to have to occasionally step back and take a look at refreshing the concept. That is exactly what executive chef David Cordúa says was needed at the Américas location located right next to the Woodlands Waterway. It has been rebranded into the sixth location of Churrascos, a well-loved Houston staple. We were invited to come check out the new digs.

The top-floor nightclub outlived its trendiness, so it’s now gone. Instead, now there’s a spacious downstairs dining room with a big, rectangular bar as the centerpiece. “It really changed the energy of the space,” said Cordúa. “I love how the dining areas are now more intimate and the energy radiates out from the center where the bar is.”

Of course, the terrific happy hour deals from 4 to 7 p.m. are still firmly in place. Seven different wines by the glass and five cocktails are $4.95 each. These include a gentle but potent margarita. “I hate the ones that make your mouth pucker!” said Cordúa with a grin. The wines include the Spanish Marqués De Cáceres rosé from Rioja and an Argentinean Tintonegro Malbec from Mendoza. At same price is comforting Idiazábal mac & cheese (Idiazábal is a naturally smoky sheep’s’ milk cheese from Spain).

Our favorite happy hour deal, though was the new Pork Cubano sandwich. Crusty bread is filled with achiote braised pork, sliced pork belly, provolone, smoked mustard and pickled relish before being pressed and toasted. “There really aren’t many Cuban sandwiches in the area,” Cordúa pointed out.

While there, diners will discover a new perspective on the menu as well. “When my family first opened, we tried hard to differentiate ourselves from Mexican food, because that’s all that was available in Houston at the time,” explained Cordúa. “I think South American cuisine is established enough that if we’re calling something ‘Pan-Latin,’ we can’t ignore Mexico. Their influence on gastronomy in the U.S. and Latin America is huge.” So, expect some familiar flavors to make appearances on the menu.

With there now only being one Américas location at 2040 West Gray (originally located on Post Oak), Cordúa says to expect some adventurous new takes on the cuisine there as well. “Américas allows me to be a little more aggressive and push the envelope farther,” he said. (Look for an in-depth look from us on the new dishes there in two weeks.)

Houston Food Finder5 hours ago
True, this weekend’s Bayou City Art Festival is a great place to pick up some new pieces, but it’s also a fabulous time to enjoy some of Houston’s best restaurants and food trucks all in one place. Sustain your art crawl with stops at the craft beer garden and food truck park, and make time to watch chefs perform demos of signature dishes. Read more from Minh Truong.

Houston Food Finder7 hours ago
ICYMI: You may already know The Toasted Coconut in Montrose, but do you know it houses a hidden, separate restaurant? Quiote is tucked behind a discrete wall and offers unique Mexican dishes and cocktails. Learn more from Cindy Wang.

Houston Food Finder is at Luce Coffee Roasters.9 hours ago
Luce Coffee Roasters
🥤Grabbing a coffee in Houston is a lot of fun thanks to the wide variety of experiences available. Choose from casual hangouts for studying, grab a brew on the run or sign up for specialty coffee classes to improve your own prep game. Most offer thoughtful eats, too, along with beans, equipment and more. Ryan Kasey Baker shares the best spots in town.