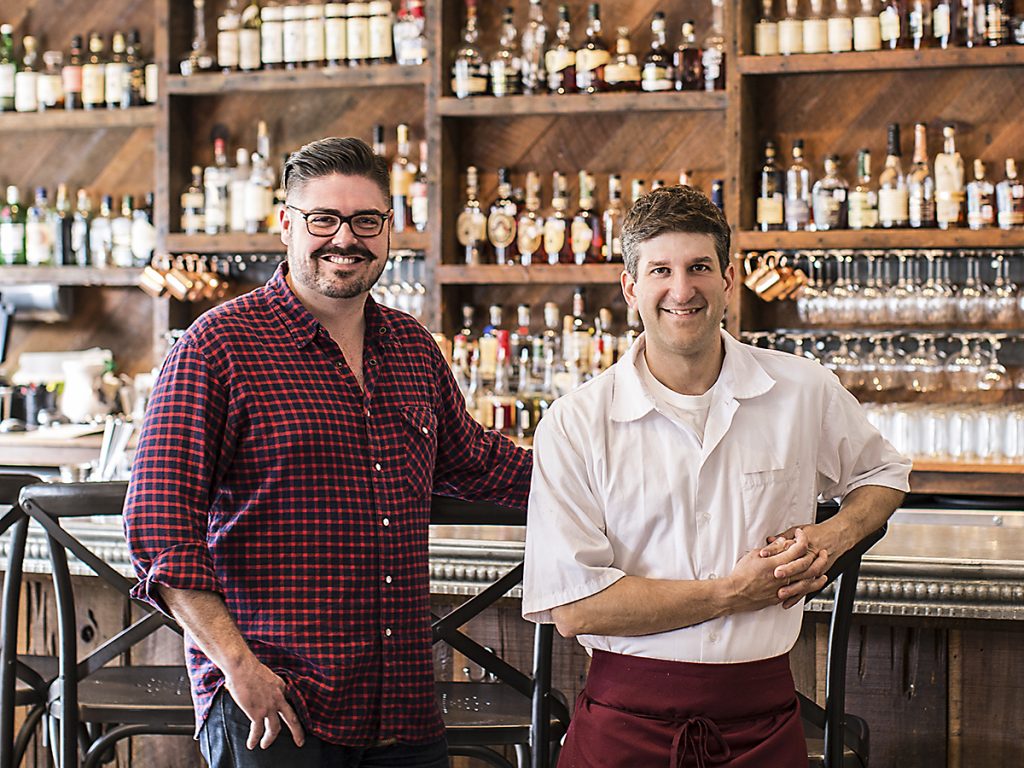 The casual spot at 1601 West Main Street most recently home to Lowbrow won’t be empty much longer. Chef Ryan Pera, Morgan Weber and Vincent Huynh of Agricole Hospitality (which owns Eight Row Flint, Revival Market and Coltivare) are opening a new restaurant named Night Heron there in February. Pera, a Montrose resident, says it’s named for the avian denizens that like to roost in Houston’s century-old live oak trees.

Here’s how that came about: Weber says they were not looking to open a new place. Night Heron is the fourth planned addition to Agricole Hospitality’s growing portfolio and joins three EaDo concepts also under development: Indianola, Miss Carousel and Vinny’s. (Those are now expected to open in April or May. According to Weber, permitting was delayed by several months thanks to a city of Houston backlog caused by Hurricane Harvey.) However, the owners of Lowbrow contacted Weber about the spaced to gauge interest. Weber says, “Ryan [Pera] has lived in the area for 15 years and has always had a hankering to do something in Montrose. It was a right-place-at-the-right-time deal.”

The quick turnaround in opening is thanks to Agricole Hospitality buying the company and inheriting Lowbrow’s existing permits. “It’s a lot less brain-damaged than going through permitting, doing a massive amount of construction and having to go through the exact same process that we’ve literally done for all of our other restaurants so far,” says Weber. “This is a turnkey deal that’s a lot less painful. It’s the only way we could have done it. If we were looking down the barrel of major renovation and all that, there’s no way we could have pulled this off.”

Night Heron’s executive chef is Jacob Pate, most recently of Nobie’s and, before that, Coltivare. The menu is still under development, but it’s likely to be an eclectic one. Ideas include incorporating flavors from Southeast Asia and the Carribbean. Also, Pate is promising “a great burger.” Brunch will be served Saturdays and Sundays starting at 11 a.m.

“The menu is going to be really tight and edited, with 10 or 12 offerings,” says Weber. “This place is geared to the neighborhood and we’re not trying to create a new type of food here. We’re trying to take the same principals and ideals with our food at Coltivare, Revival and Eight Row, and keep that tradition strong by buying good ingredients and relying on solid cooking to execute food that people crave.” Weber says Night Heron will also stay away from the “fussy,” detailed menus that he’s observed as a country-wide trend. “I have a hard time finding something on these menus that I just really want to eat, you know?” he said. “If you drop into Night Heron on Monday for a quick bite, we want you to be able to do the same thing on Thursday and not feel like you have to eat the same dish.”

Julie Rogers, a familiar face from Coltivare, is Night Heron’s general manager and she will also guide part of the beverage program. She’s one of Houston’s few Certified Cicerones (the beer world’s equivalent to the sommelier certification). Her plan for the beer program includes five brews on draft and an extensive bottle list. She’s also taking charge of the cocktail program. “I’m so excited about Julie,” says Weber. “Julie has been with us for years and being able to give this to her and let her run with some of the ideas that have been kicking around in her head—I’m really excited to see how they come together.”

Weber is redesigning the Lowbrow space with a more airy, bright, nature-inspired look to reflect the Gulf Coast ecosystem. One thing won’t change, though: the “come-as-you-are” environment. “We want this to be a comfortable space for everyone,” says Weber via a press release. “We’re not here to dictate how you drink or eat. We want to provide our guests with quality options. You want a great bottle of wine but you’re wearing shorts and flip flops? This is the place for you. Hungry after visiting the Menil? Come on over.”