Houston Chefs To Know: Nick Fine At One Fifth Steak 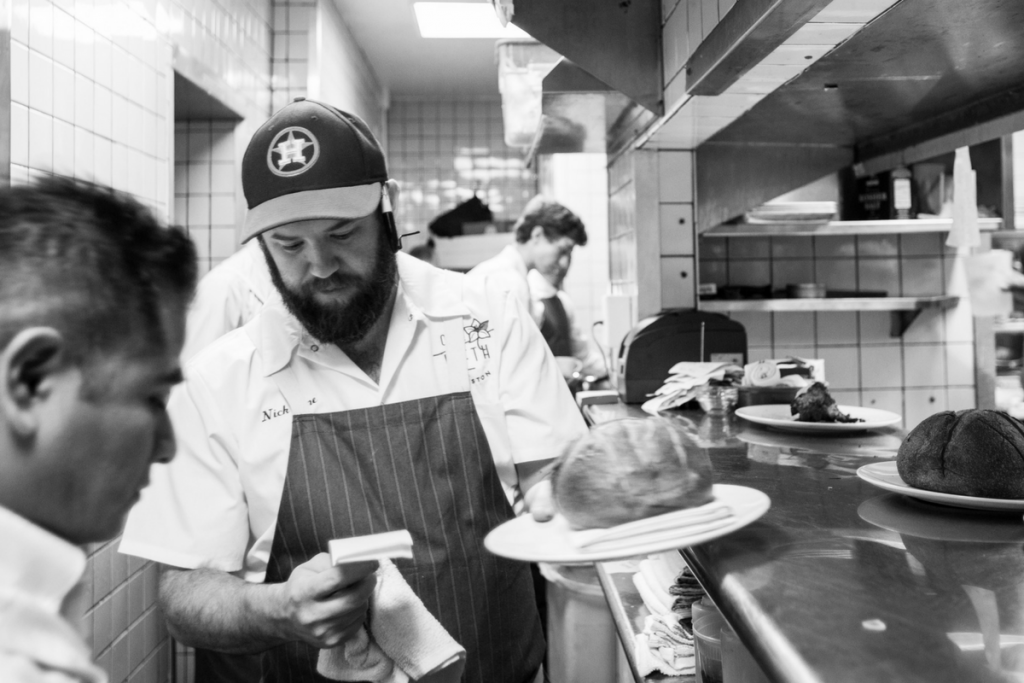 Chris Shepherd’s name is synonymous with several of Houston’s most acclaimed dining destinations, including his most recent endeavor, One Fifth Steak. That said, Shepherd is the first to say that his success is dependent on a team of talented and committed individuals. Nick Fine, chef de cuisine at One Fifth, is one of those essential members. A Houston native, Fine took positions throughout the country before bringing his work ethic, culinary prowess and sense of humor to every meal at his current restaurant. In this interview, Fine shares how he came to work at One Fifth, his culinary perspective and how he has fun during his off hours.

Where did you work before?
My first kitchen job was at Yellowstone National Park in college. I went to Texas Tech and attended Scottsdale Culinary Institute, working at resorts in Scottsdale and Palm Springs. From there I returned to Texas and worked at the Mansion on Turtle Creek before working in NYC at Veritas, Brennan’s of Houston, The Little Nell in Aspen and Oak and Acorn in Boulder, Colorado. Before coming to One Fifth I helped open State of Grace as the sous chef.

Where did you get your culinary education?
I had planned to be a park ranger, which is why I was studying at Texas Tech and living in Lubbock, but decided to go to culinary school at the Scottsdale Culinary Institute after college. I think culinary school is a great way to get your foot in the door and I really think it gives you a base, but the education comes from where you work and the decisions that you make at every single job you take. The guy I worked for in New York—his name was Scotty Bryan—said “If you can’t walk into a kitchen, any kitchen in the US and feel like you could cook on that line, you’re not ready to be a sous chef. You still have stuff to learn.” He said I’d better cook on the li

What drives the food concept at One Fifth?
We say it’s not really a restaurant; it’s kind of more of an idea. We started with this iconic building and we have the opportunity to be here five years and that’s all we have. So to only have something that short of time we decided to challenge ourselves every single day. The way we thought of it was “What do we like to eat?” and that’s how we came up with the first concept. We [Chris and I] really love steakhouses so that drove the concept. We always cook steaks in cast iron, but then it also has “Chris spins” such as the uni panna cotta and sweetbreads. This isn’t a normal steakhouse. You’re not going to find a crab cake or a filet, because we find that though we don’t do 100-percent animal butchery here, we do have the concept of it. We won’t buy just one cut of meat, and we make sure we’re sourcing from the whole cow. We do a lot of off-cuts for our butcher cuts. We’ve sold just about every part of the cow except for the lungs.

What are your personal favorite dishes at One Fifth and in turn, what do you suggest first-time visitors order?
I think my favorite dish is just this restaurant. If I were to have a steak here it would be our 16-ounce ribeye because we started this concept as “What’s your favorite steak?” Mine’s the ribeye, because it has lots of fat, and fat is the vehicle for flavor. It gets really crispy seared on the outside, and it’s salty. To me, it’s the dish that sums up One Fifth Steak. I would also recommend the bacon sausage for first-time guests.

What’s the best part of being a chef?
My favorite part is people. It just goes back to all the people I’ve met through this career. It started with working at Yellowstone National Park as a dishwasher as a college kid. There was this guy who would buy us Yellowstone whiskey and he’d tell us stories. And I worked with a guy who graduated MIT and got out of a think tank and wanted to have a job where he creates something with his hands. And that guy was a horrible cook because he overthought. But that’s what’s so great. It’s [cooking] a great equalizer. Whoever you are outside of this place it really doesn’t matter as long as you come in with a great attitude and you’re here to make the guests happy.

What are signature dishes you have contributed to the menu at One Fifth?
Aside from the uni panna cotta, I don’t think there’s that there’s anything on the menu that is 100-percent Chris or 100-percent me. Everything has evolved into a collaborative effort. We have a guy who makes the carrot salad and there’s no way I could make the carrot salad look the way he does. He makes it look freaking beautiful.

What contribution are you most proud of?
Rick Flair: that’s my biggest contribution so far. Rick Flair is a wrestler from the ‘80s and ‘90s and he’s kind of our mascot. He’s the most cocky, arrogant, horrible wrestler – he cheated, was really mean and really flashy – but he had a great saying: “If you want to be the best you’ve got to beat the best.” He does this “whoooo” sound. I got everyone to start saying this phrase with the “whooo” so I made t-shirts for everybody that say “ You’ve got to beat the best to be the best” and it’s got Rick Flair on the back. In line with that, I think the biggest thing I am most proud of contributing is execution and drive. Chris is such a great idea guy and we do that together, but it’s the execution, drive and trying to get people to buy into is the biggest thing that I think I do.

Is there such thing as an average day?
I get here in the morning, make sure everything’s prepped, make jokes and sign invoices. The biggest thing is just making sure that [my coworkers] are happy and checking in with them in terms of personal and work life. When I started doing this I had a bit of a control issue and Chris and Victoria have both been really great in teaching me that I don’t have to do everything and it’s okay to let go a little.

Houston Food Finder7 hours ago
ICYMI: Phaedra Cook visited Hidden Omakase, now a woman-led restaurant under chef Niki Vongthong, formerly of Uchi. Get the details of her 13-course meal, and learn more about the Houston-raised chef whose been around the culinary scene her entire life.

Note: With only 16 (soon to be 18) seats, it's admittedly difficult right now to get a reservation. Seats are released on Resy two weeks ahead of the dining date. However, that there are still spots available for the collaborative vegan omakase with chef Martin Weaver on Wednesday, June 8, so if you're curious, you might want to get in on it. (Check Hidden Omakase's Instagram account for details.)

Go inside one of Houston's most exclusive omakase restaurants in this look at Hidden Omakase in the Galleria area.
View on Facebook

Houston Food Finder11 hours ago
Fill Father's Day with fun, food and fantastic deals! The holiday is Sunday, June 20 — that's THIS weekend — and this list from new writer Lauren Bebeau has you covered with plenty of ideas in Houston and surrounding areas. Choose from laidback burgers and barbecue, succulent steaks, fresh Tex-Mex, limited-release tastings and much more. Click below for all the details!

Houston Food Finder with DR Delicacy.12 hours ago
Start your exquisite Father’s Day feast with caviar from DR Delicacy! The Houston-based specialty foods purveyor only the best real caviar from around the globe. Take 15% off when you buy online or from the storefront at 4120 Directors Row Suite A through Sunday, June 20 with code SHOPDAD. Choose from a wide assortment, including Siberian Osetra, Kaluga Black, Bowfin, and Russian Osetra Karat Imperial Gold. There’s even a Spicy Cajun Caviar made with Ghost Peppers from Louisiana Caviar Co. Don’t forget to add blinis and crème fraîche! For the full selection, visit the shop Mondays through Fridays from 10 a.m. to 4 p.m. and Saturdays from 10 a.m. to 2 p.m., or go online for more information and to order.

Houston Food Finder1 day ago
Summer temperatures have arrived in Houston, and what sounds really, really good right now is a chilled seafood dish with an icy cocktail alongside. You can find that and so much more with Beth Levine's brand-new Hit List of #Houston restaurants to visit for June 2021.