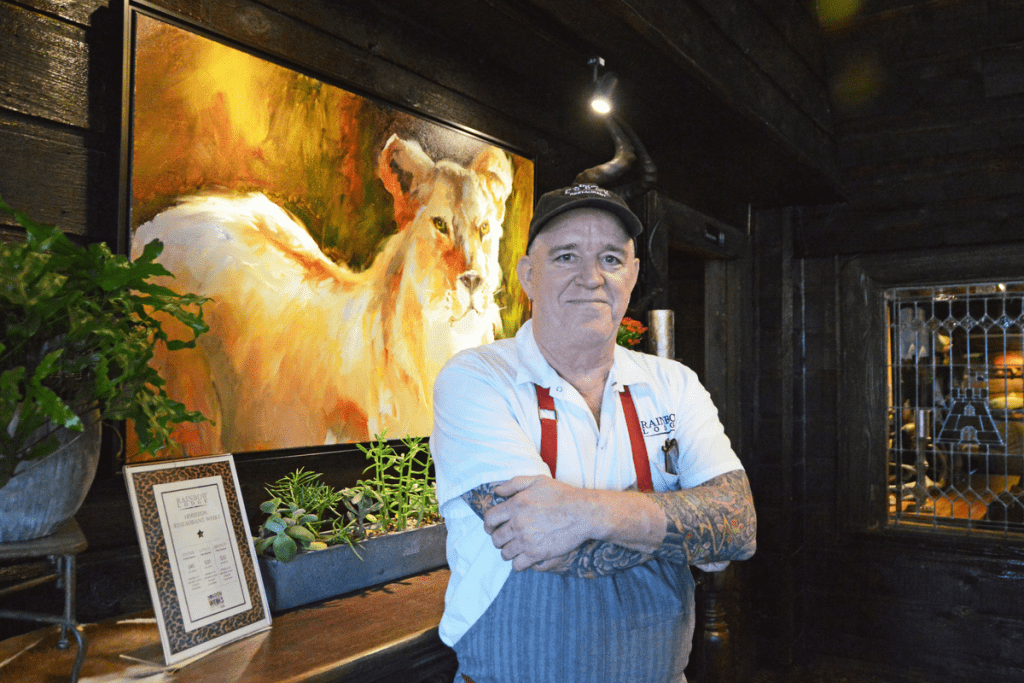 Schmidt brings a range of influences to the dishes at Rainbow Lodge including German, British, Texas and Gulf Coast. Photo by Ellie Sharp

Rainbow Lodge, the beautiful, spacious log cabin at 2011 Ella near T.C. Jester, has long been known for its game meat-centric menu and the weddings held on its impeccably landscaped grounds. Behind the acclaimed cuisine is executive chef Mark Schmidt, who has helmed the Rainbow Lodge kitchen a total of five years.

He was born in Tyler to a Texan father and a British mother. His formative years were spent in Liverpool, England but he returned to the United States for college. In the mid-1990’s, Schmidt started making a name for himself as a chef after helping Stephan Pyles—one of the godfathers of Southwest cuisine—open “global seafood restaurant” AquaKnox in Las Vegas. (Pyles later sold AquaKnox to a restaurant group.)

From there, Schmidt opened a seafood place in Connecticut for the Max Restaurant Group, then went on to be chef de cuisine at The Compound in Santa Fe, New Mexico for four years. His first restaurant of his own was Café 909 in Marble Falls, Texas, which he ran for five years before taking the executive chef position at Rainbow Lodge.

He’s actually had that role twice. His first stint at Rainbow Lodge was from 2009 through 2012, then he left to again run his own modern British restaurant in Austin, Blackbird & Henry. After it closed, he returned to Rainbow Lodge in 2015.

His varied background is why his dishes have meandering touches of British, American southwest and Gulf Coast influences. There’s also a lot of German touches, thanks to, as he says, “having a last name like Schmidt and being in Central Texas. I’ve always liked German food and the very first restaurant I ever worked in was a German restaurant.”

In the interview below, Schmidt discusses his varied background and the culinary perspective that has led him down many different paths in his career.

Where did you get your culinary education?
I knew I wanted to be a chef when I was six and started washing dishes when I was 15. I worked my way up and paid my way through college studying geology. I worked in the oil industry for a few years and hated it, went back into restaurants and just worked my way up through the kitchen.

I went to college in Texas [and] did not go to a formal culinary school. If I had known about the CIA [Culinary Institute of America] I probably would have tried to go there. But growing up in England, the way you became a chef was you apprenticed. You got a job in a restaurant and you worked your way up. You started scrubbing pots and then when you mastered that they’d have you start doing something else.

What drives the food concept at Rainbow Lodge?
Rainbow Lodge has been around about as long as I’ve been cooking but the whole concept is a hunting lodge: wild game, but also gulf seafood. I’m able to mix in regional, South Texas, Southeast Texas and Louisiana influences. A lot of our game comes from Central Texas so I’m still able to mix in my [background]—the German and British. I think the food here, to match the building, has to have rustic elegance. We value presentation but the food has to be accessible. There’s definitely a Southern bent—Southern Texas, Southeast Texas and Gulf Coast—but with the wild game there’s also a Central Texas and European influence.

How has the menu changed or stayed the same since you first came to Rainbow Lodge?
There are a couple of things on the menu that predate me. The smoked duck and Andouille gumbo has been on the menu almost 30 years and we have a croissant bread pudding that’s been on the menu about 25 years. Those things are basically untouchable. Now we have a quail dish: southern fried quail with Texas Redneck cheddar organic grits and bacon-bourbon gravy. I put that on the menu the first time I was here and now that’s sort of a signature that always stays on. Certain proteins we always keep, but we change up the presentation and the garnish. We get a lot of stuff from Broken Arrow [Ranch in Texas]. We try to get Texas beef when possible. The antelope, wild boar and quail are all from Texas. What do you suggest first-time visitors order?
Definitely the signature things like the duck gumbo and the quail. If they’re into wild game, the mixed grill is a nice assortment – it comes with a quail, wild boar, venison and elk. I think we do a really good job with seafood. We try to use a lot of Gulf seafood but certain times of year, when halibut is in season, it’s such a great fish that I like to bring that in. We also use East Coast scallops. But our snapper and shrimp are from the Gulf. When soft shell crab is in we try to get those. For nightly specials, I like to bring in some lesser-known bycatch.

What are your personal favorite dishes at Rainbow Lodge?
I really like the snapper that we’re doing right now. It’s Gulf red snapper over a crawfish and Andouille jambalaya. I love the quail.

Is there anything you think diners would be surprised about the menu or how it is created?
I think people would be surprised on how much we use out of our garden and also the fact that we have our own beehives for harvesting honey for the restaurant. The garden dates back to early to mid-2000’s. Donnette [Hansen, owner of Rainbow Lodge] has always supported using as much local as possible. We try to hit the farmers markets as often as we can. [Over the summer, we grew tomatoes, okra, eggplant and long beans, and harvested 30 pounds of honey.]

What’s the best part of being a chef and, separately, and what’s the best part of being a chef here?
Generally in the restaurant industry the pay is low, the hours are long, it’s physically demanding, it’s hot, it’s somewhat dangerous with all the knives. There are so many cons. So the people who really succeed are the ones who actually love it. The pure joy of doing it kind of outweighs all the cons. Yeah, there are days where I get frustrated, but at the end of it—on my day off on Monday, half the time I’ll cook at home “just because.” Oftentimes, the act of cooking, and cooking in a restaurant, are two different things.

The best part about working here is the freedom. I get to do what I want to do. There’s the “lodge style” of food, but it’s wide enough that it gives me time to have creative freedom and the owners are very receptive. The fact that I was here and then left – I think I’m appreciated a little differently, and I think one of the things that Donnette appreciates about me is that I have been a restaurant owner. There are a lot of headaches an owner has that I can understand.

Is such thing as an “average” day at Rainbow Lodge and if so what would that entail?
No. You hope and pray for an average day but there’s always something that can happen. Somebody doesn’t show up; there’s a last minute party booked and they want appetizers that you’re not ready for; someone gets sick during the busiest part of the night and has to go home. There’s no such thing as an average day.

What’s your favorite way to unwind after a shift?
I have a routine. I go home and the first thing I do is take [my dog] Ollie out for his evening walk. Then I’ll either fix a cocktail or open a beer. I collect vinyl, so the best way [to wind down] is put a couple records on. I collect vintage audio equipment, so I have three vintage turntables and a couple vintage stereos. I listen to all types [of music]. The last stuff I bought was an Old Live Tin Lizzie and Leonard Cohen. When the weather is nice, I go out on my 1960 Norton motorcycle.

Disclaimer: As of the publication date, Rainbow Lodge was a current sponsor of Houston Food Finder.