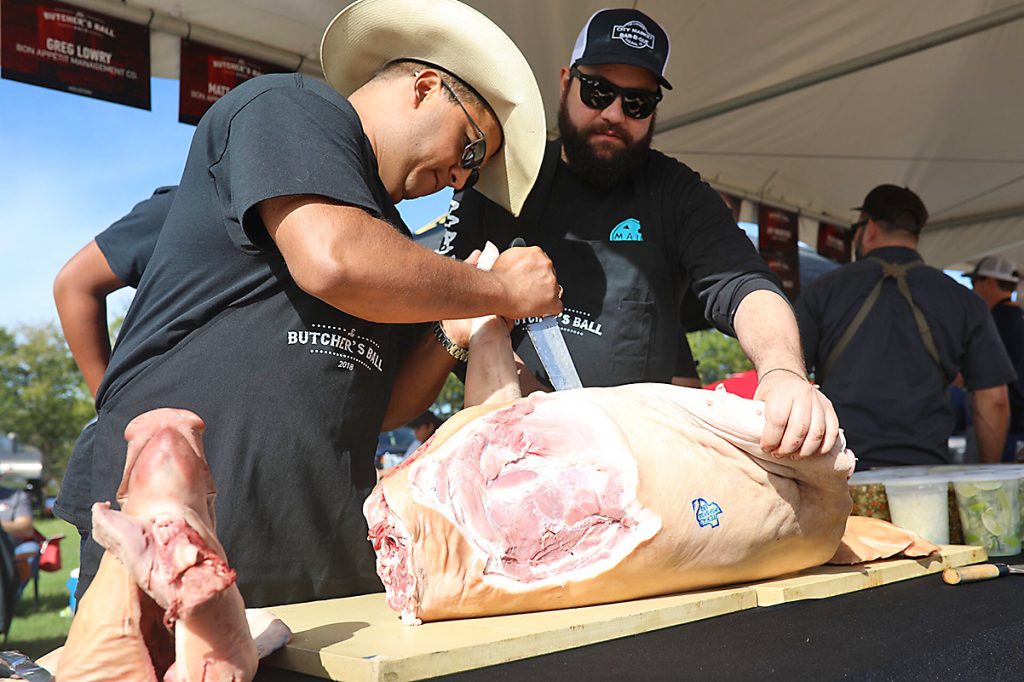 Felix Florez shows off his butchery skills while chef Jean-Phillipe Gaston looks on at the 2018 Butcher's Ball. Photo by Daniel Jackson.

Founded in 2016 by public relations consultant Jonathan Beitler, Rockin’ Star Ranch’s Elaine Dillard and chef Jason Kerr, The Butcher’s Ball has become a premiere showcase for Texas’s top chefs and pitmasters. Each year, the event, which now attracts crowds of avid diners to Rockin’ Star Ranch’s pastoral setting in Brenham, has grown. This year is no exception. The Fourth Annual Butcher’s Ball on October 20 is adding a chefs’ dinner the night before the main festivities and will feature over 50 industry professionals. This culinary extravaganza not only brings attendees closer to the people who produce food in Texas, it also raises funds for non-profit organization Urban Harvest, which organizes farmers markets, conducts gardening education at schools, and helps maintain community gardens in the Houston area.

General admission tickets for Butcher’s Ball festivities on Sunday are $100 and are available online. Information for the dinner, VIP tickets and a limited-availability staycation package are below. In addition, there is a convenient shuttle service running from both Houston and Austin. The cost of being chauffeured is only $50.

NOTE: Our readers can use code HFFBALLER to get 20% off VIP and general admission event tickets through Labor Day, September 2.

For the first time, the Butcher’s Ball participants are organizing a big feast the night before the main event. At least a dozen top Houston chefs are teaming up in pairs make dishes, each paired with beer, wine or a cocktail. Cocktail hour starts at 6 p.m. and dinner begins at 7 p.m.

Chefs confirmed for the Baller Dinner so far:

Afterward, the guests can attend an after-party at 9 p.m. with cocktails and desserts served in the Butcher’s Ball Chef Camp hosted by Revive Development and Gin Designs. Tickets cost $150 per person and proceeds benefit Urban Harvest.

In addition to the Golden Cleaver competition, a selection of chefs are being featured in the Open Fire Farm & Ranch Showcase, a series of cooking demos using outdoor methods that will throughout the day. More chefs may be announced in the coming weeks, but this is already a great list:

That’s a lot to see and eat, but there’s more. Julia Poplawsky of the Central Texas Meat Collective and Jack Matusek of Raw Republic Meats are giving butchery demonstrations and various industry leaders will be discussing food production and issues facing farmers and ranchers. In addition, Pope is hosting a cooking class for kids age 7 to 17. The cost for that is $40.

Dinners will need something to wash down all that food. So beverage consultant Linda Salinas is crafting cocktails, sommelier Cat Nguyen is pouring a selection of Texas wine and 8th Wonder Brewery is providing beer. Finally, a group of Houston pastry chefs are making desserts, including Rebecca Masson of Fluff Bake Bar, Hani Lae, Poitín and Johnny Wesley and HTX Nitro Creamery. Paul and Sara Burden of BuffBurger are collaborating with Hill Country Dairies on a boozy milkshake.

For Those Who Want It All

When “All” Isn’t Enough

There is an even swaggier VIP package called the Super Baller. It costs $3,000 but covers 10 people and includes:

As of press time, only eight of these packages are still available.

For Those Who Also Want a Staycation

This year is the first time attendees can stay  at Rockin’ Star Ranch for the weekend. Designed for groups of four, the $2,500 experience includes:

At press time, only five of these packages are left.

The bottom line: if you attend this year’s Butcher’s Ball and are hungry, thirsty or bored, it’s your own fault. Visit the website for updates, tickets and more information.