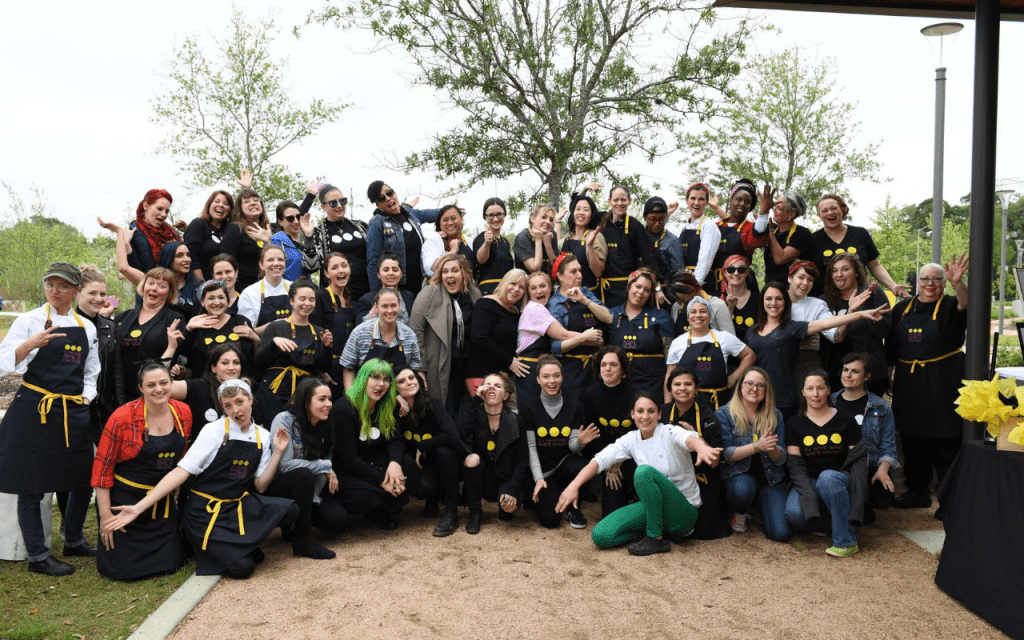 It’s a controversial time to take a clear position on women’s rights, but that’s not stopping some of Houston’s top chefs and their advocates from working for what they believe in. I’ll Have What She’s Having (IHWSH) is an organization that’s raised funds since 2017 to enable restaurant workers to access preventive care, mental healthcare and cancer screenings. On Sunday, June 5 from 2 to 6 p.m., it’s hosting the IHWSH Live! Rock & Roll Picnic at the Continental Club at 3700 Main. The event benefits IHWSH’s more recently established 1973 Project fund, which supports Texas organizations that help women obtain safe abortions.

The IHWSH Live! Rock & Roll Picnic is actually comprised of a full day that extends far beyond a meal, and some activities don’t even require a ticket. The Mid Main area surrounding the Continental Club includes several women-owned businesses, and the day kicks off at 1 p.m. with a talk by artist Elena Sandovici at Mid Main Gallery. She holds a Ph.D in political science and has previously lectured about Roe v. Wade. My Flaming Heart, The Fashion Time Machine and Double Trouble Caffeine & Cocktails are donating a portion of the day’s sales — and Double Trouble owner Robin Berwick is creating a special cocktail for the day, too. Attendees are encouraged to arrive before the picnic starts to stroll around and indulge in some shopping and imbibing.

At the Continental Club, and as part of the ticketed picnic event, women-led bands and female musicians are performing from 2 to 6 p.m. The overall schedule for the day is as follows:

Picnics will be packed Indian-style in tiffins — stacked lunch boxes comprised of multiple containers that are perfect for the four-course lunch. The star chefs and restaurant owners contributing to that lunch are:

“I’ve been part of I’ll Have What She’s Having since I moved to Houston,” says Garcia. “When I was a line cook, I couldn’t afford healthcare. Any way I can give back is important to me because it’s something that genuinely helped me. We’re talking about women’s health and the right to a safe abortion. It’s something so real that affects everyone, not just women. It’s hard, but it’s important to be a voice for this cause in the state of Texas.”

Each tiffin feeds from two to four, costs $197.30 and can either be enjoyed at the Continental Club during the concerts or at home. There are also VIP table tickets for $1,973, which include admission for six, two picnic tiffins, drink tickets, table service and online recognition. (The cost comes to $328.83 per person.) Those looking for low-cost way to attend the event and just enjoy the concert can pick up a general admission ticket for $25.

Closing out the day, Winnie’s will host an after-party and is also donating a portion of cocktail sales to the cause.