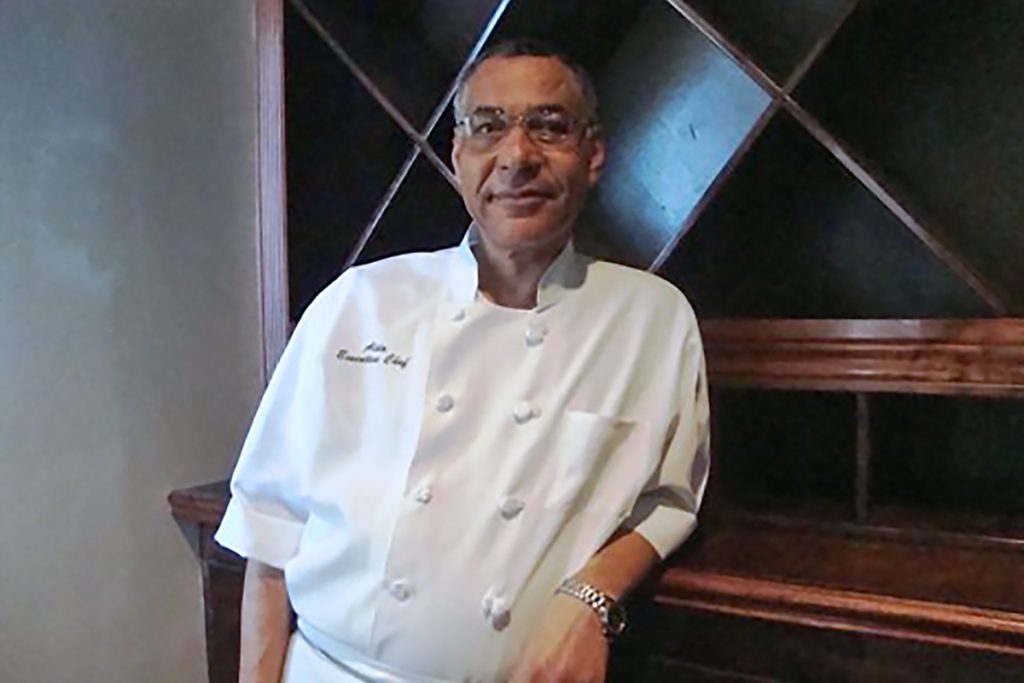 Acclaimed Houston chef Aldo El Sharif, who has been away from the restaurant scene since 2013, is returning with a four-course wine dinner on Friday, November 15, 6 to 10 p.m. It’s taking place at Olive & Twist Bar + Kitchen, at 2712 Richmond, formerly home to Queen Vic Pub & Kitchen.

El Sharif was born in Cairo to a Sicilian mother and an Egyptian father before the family moved to Milan when he was ten. In his adulthood, he could be found tending the stoves and strolling the hardwood floors explaining the day’s specials at 219 Westheimer, the two-story Victorian house-turned-restaurant that was later home to Feast. Opened in 1995, the seven-table Aldo’s Dining Con Amore served creative and expensive takes on Italian food that often featured wild game on an ever-changing, ingredients-driven menu.

Throughout the late 1990s and early 2000s, the Houston Chronicle regularly praised El Sharif, saying he “cooks from the heart, creating some of the most complex innovative and exotic dishes in town” and calling his food “astonishingly close to perfection.” His extensive wine list was also well regarded. In 1997, Wine Spectator named it the “Best of the Best” and in 1999, he was a nominee in My Table magazine’s Houston Culinary Awards’ Chef of the Year category.

It wasn’t El Sharif’s first or last restaurant in the Houston-area. Prior to Aldo’s, he was chef and co-owner of the popular Buttarazzi, which opened in north Houston’s Champions neighborhood in 1982.

Capitalizing on his success at Aldo’s Dining Con Amore, in 1999 he opened Osteria D’Aldo with Marco Wiles (who, after working for El Sharif, would go on to open Houston classics Da Marco, Dolce Vita and Poscol). As Enron Field (now Minute Maid Park) was rising at the dawn of downtown’s current renaissance, El Sharif choose the historic Sweeney, Combs, and Fredricks building at 301 Main as the location of a new wine bar and restaurant specializing in cicchetti (Italian tapas). The Houston Chronicle said the food at this more casual and less expensive establishment “rates with the very best in Houston.”

He even embraced Houston’s burgeoning downtown lifestyle by living in a loft above his second downtown business, Salumeria di Aldo, which was at 306 Main. In other words, at that time he was living in or above what is now Captain Foxheart’s Bad News Bar & Spirit Lodge, the heart of Houston’s revitalized downtown bar scene.

In July 2004, El Sharif finally closed his eponymous classic on Westheimer, not for economic reasons but because he was looking for a new challenge after years of running a one-man operation, handling everything from bookkeeping to cooking. By then, he had sold the osteria and salumeria and opened with his brothers two other north Houston restaurants, Polliciniella and Il Pazo Aldo.

El Sharif was ahead of his time, bringing innovations to Houston’s dining scene now regarded as commonplace, including small-scale, chef-driven dining, menus that change daily and a chef’s table. He also saw, before many others, downtown’s potential.

In addition, he recognized the possibilities in Houston’s underserved suburbs. After a few years of consulting and cooking for other owners, he opened, in 2011, Aldo’s Cucina Italian in Shenandoah, just north of The Woodlands. In May 2012, Houston Press restaurant critic Katharine Shilcutt declared the restaurant worth a trip to Shenandoah, and in 2013, the Houston Press named the restaurant’s Oxtail Francobolli one of the top 100 dishes of the year. That same year, El Sharif closed Aldo’s Cucina Italian.

Health concerns and a desire to explore other opportunities have, over the last few years, kept El Sharif from the restaurant grind. He says he is now in good health and ready to ease back into Houston’s dining scene with a handful of pop-up dinners.

El Sharif says he doesn’t miss running a business but he does miss “sharing his passion.” He said, “Cooking is my passion. I really enjoy it when people’s palates dance with flavor.” Though, he currently doesn’t want to return to being a full-time restaurateur, he does want to share his cooking with people.

For his four-course return at Olive & Twist, El Sharif plans on preparing dishes such as Burrata Bolognese paired with Elouan Pinot Noir and Filetto al Gorgonzola served with Billhook Red Blend. The cost is $99 per person, plus tax and gratuity. You can reserve a space via Olive & Twist’s Open Table site.