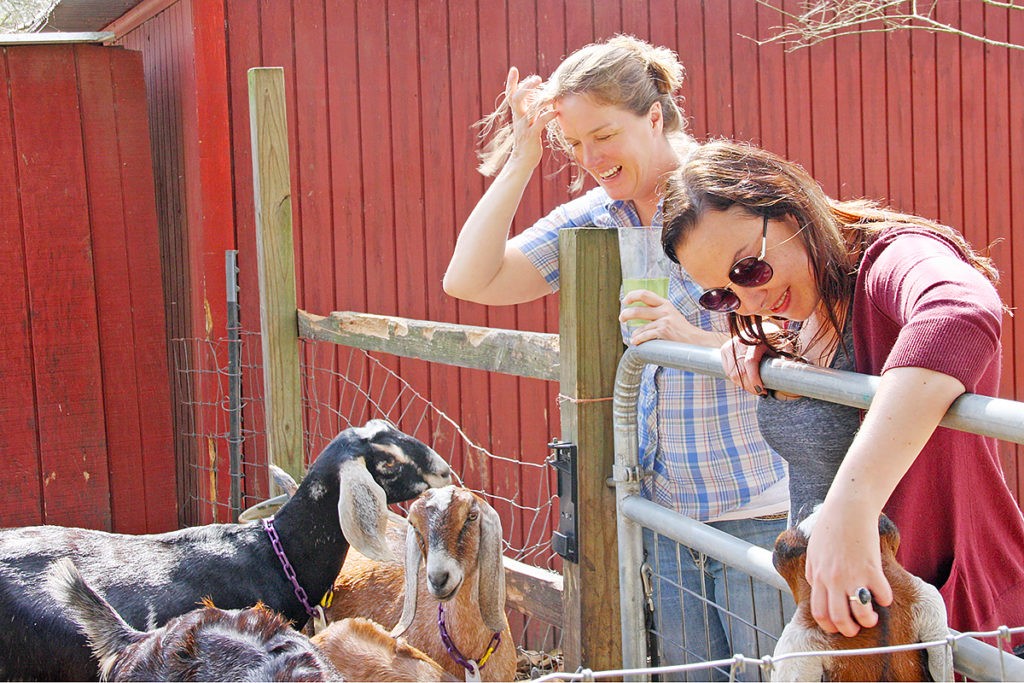 A new series by chef Richard and Carrie Jean Knight (pictured right) will showcase various farms and the people who work at them. One to be featured will be Stacey Rousell (pictured left) of All We Need Farms.
Photo by Richard Knight

Chef Richard Knight (formerly of Treadsack Group restaurant Hunky Dory) and longtime industry professional Carrie Jean Knight (who is also, as you might guess from the name, Richard’s wife) just announced Breaking Bread, a pop-up dinner series that showcases local farms, chefs, sommeliers and other talented professionals in or near the Houston area. The dinners are described as “a feasting of local meats, fish, provisions and wine.”

The series kicks off on March 25 at Barry Farms and will span approximately three months. Every few weeks will feature a new menu, guests and setting. Planned guests include fellow Treadsack alumni P.J. and Apple Stoops (formerly of Foreign Correspondents); Leslie Krockenberger (née Ross, former beverage director, now at Reserve 101), her husband Frank Krockenberger of Beam Suntory; and Kathy Elkins (of Knight’s former spot, Hunky Dory) along with her spouse Carter Wade Elkins of food import and distribution company Euro Mid. Chef Lyle Bento of Southern Goods will also be featured. Others may be confirmed in the future.

Tickets for the Barry Farms dinner are available on their web site. People interested in the Breaking Bread series can also “like” that Facebook page for updates. (See the About section for details.)

The Breaking Bread series is a natural offshoot of the relationships chef Richard Knight has cultivated since his days at Feast, the homey British restaurant that he co-owned during its five-year run in the Montrose. He says he has a great deal of admiration for the farmers he works with and that’s why he wants diners to experience what they have to offer. “These people had normal jobs and decided to farm. They did it and work so very hard. They love to entertain and tell people what they do,” he said. “We liked the idea of sitting down with people we love—chefs, industry people and farmers—and basically having a good time eating, drinking and carrying on.”

Carrie Jean agrees. “These are hard-working people with families. We want to show the world—or at least the foodie world in Houston—what they do. We’ve had some of these dinners before with the farms and other chefs and wanted to create a series to show how awesome they are.This dinner series is Richard and I taking our various skill sets and putting them together to help the community and forge new friendships between industry people and foodies.” Carrie’s 20-year career in Houston includes being a hostess, prep cook and bartender at places that include Pappas Restaurants, Barnaby’s, Brown Bag and Boomtown Coffee, as well as helping start a volunteer organization called the Women of Montrose Action Network.

A portion of the Knights’ proceeds from all the events will go to Heifer International, with the exception of one. The dinner on Saturday, April 29 at All We Need Farms benefits the Needville Volunteer Fire Department, which recently saved the farm after an accidental fire raged out of control on a neighboring property.

One other fun aspect of these dinners: it’s a little known fact that Richard Knight is a talented photographer in addition to being a chef. He plans to start sharing some of that work via the Breaking Bread Instagram feed at @breakingbreadhtx.

Of course, the most tantalizing question is whether this pop-up series is the lead in to the Knights opening their own restaurant. “We haven’t got that far yet,” said Richard Knight. “We don’t have the big plan yet. We’re just doing this the next few months and then will see where we go from there.”