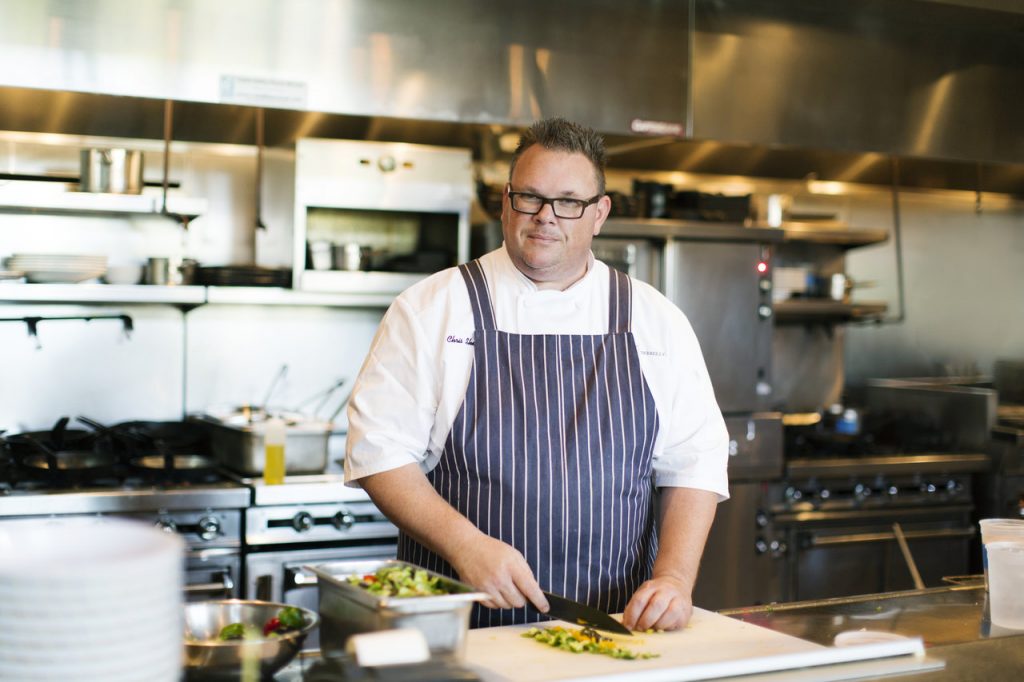 Never say that Underbelly Hospitality chef and owner Chris Shepherd doesn’t challenge his team — or diners’ ideas on what a restaurant can or should be. With only 18 months left of the One Fifth building lease — the old cathedral that formerly housed Mark’s American Cuisine — Shepherd is rolling out the ultimate pop-up restaurant concept. On March 23, the current One Fifth Gulf Coast iteration ends, and the team is then preparing for, simply, One Fifth. The final year is going to be executing one restaurant idea after another at a quick pace, without necessarily having a firm time limit. Shepherd is calling it the “Lightning Round.”

Here’s how Shepherd says his rapid-fire pop-up idea came about: “I woke up this morning and started thinking about the building’s wood burning oven—arguably the oldest wood-burning oven in the city—and we have never cooked a pizza for a guest in that oven. No, I don’t want to do a pizza place for 11 months, but I would do it for a few. Then I thought about that with a lot of different concepts and came to the realization: Why not do them all?”

Shepherd already knows what he wants for the first menu. “We will start with Vietnamese and then move through other ideas and concepts without giving them a time limit,” he said via press release. “I want to try as much as I can but still give each one our full devotion.” In theory, the pizza place idea is getting a turn later in the year.

“This will be arguably the most challenging thing we have ever done, but the team is ready,” Shepherd said. “We will not release what concepts are in the future, and we’ll give three weeks’ notice before we close a concept. I know it’s confusing, but I don’t want to end the five years and think, “What if or why didn’t we try something”. One Fifth is all about education and learning and experimenting and exploring, and we have so much more to explore in such a short time. I hope you all enjoy the ride with us and understand that this is insane in the BEST way possible.”

Besides the forthcoming, multicultural pop-ups at One Fifth, diners may also be able to look forward to a permanent One Fifth Mediterranean, one of the previous iterations. Shepherd says he is actively looking for a space for it.

Houston Food Finder5 hours ago
Better Luck Tomorrow just landed two important new team members. One is a chef at a downtown steakhouse. The other is an industry veteran who's worked at Anvil Bar & Refuge, Rosie Cannonball, Coltivare, Uchi and more. Read David Leftwich's article for details on who just joined Justin Yu and Bobby Heugel under their business umbrella.

Houston Food Finder1 day ago
Texas Monthly have once again taken on the monumental task of ranking Texas's best barbecue joints, whittling down from hundreds of restaurants. Did your go-to make the list?
#houstonbarbecue #houstonbbq #bbqjoint

Looking for the best barbecue in Houston? We delve into the Texas Monthly's Top 50 Barbecue, which is all new for 2021.
6    View on Facebook

Houston Food Finder with DR Delicacy.1 day ago
Fall mushroom season is here, and DR Delicacy has an incredible assortment of fresh and dried options perfect for wow-factor meals. Enhance seasonal recipes such as soups, hearty pastas, meats and more with unique textures, aromas and flavors. Examples include Lobster, Matsutake and locally grown Lion's Mane mushrooms. Visit the DR Delicacy warehouse at 4120 Directors Row, Suite A to shop in person, or order online at https://drdelicacy.com/. The store is open from 10 a.m. to 4 p.m. Monday through Friday and 10 a.m. to 2 p.m. on Saturday. Call or text (713) 303-3503 for current prices and additional information.

Buy caviar and gourmet food online in Houston, Texas at DR Delicacy. We are a leading supplier of caviar, foie gras, truffles and truffle products, salmon, mushrooms, seafood, and Meat.
30    View on Facebook

Houston Food Finder1 day ago
ICYMI: Nosh with nature — sort of! These restaurant patios in the Heights offer guests welcoming outdoor spaces fit for occasions of all kinds.

Houston Food Finder with Della Casa Pasta.1 day ago
Texas Chefs, Restaurant Owners and Caterers, this is for you! Request your free tasting kit from Della Casa Pasta, made fresh and locally in Tomball, Texas — and now celebrating its 10th anniversary! Dozens of shapes and multiple flavors are available, all made only with all-natural ingredients. Choose from our catalog, or take advantage of our custom pasta and ravioli services! If you dream it, we will make it in our commercial kitchen. Visit this webpage to view our printable catalog and click Order Now to request your free tasting kit. Offer good ONLY for qualified wholesale buyers. https://www.dellacasapasta.com/wholesale/