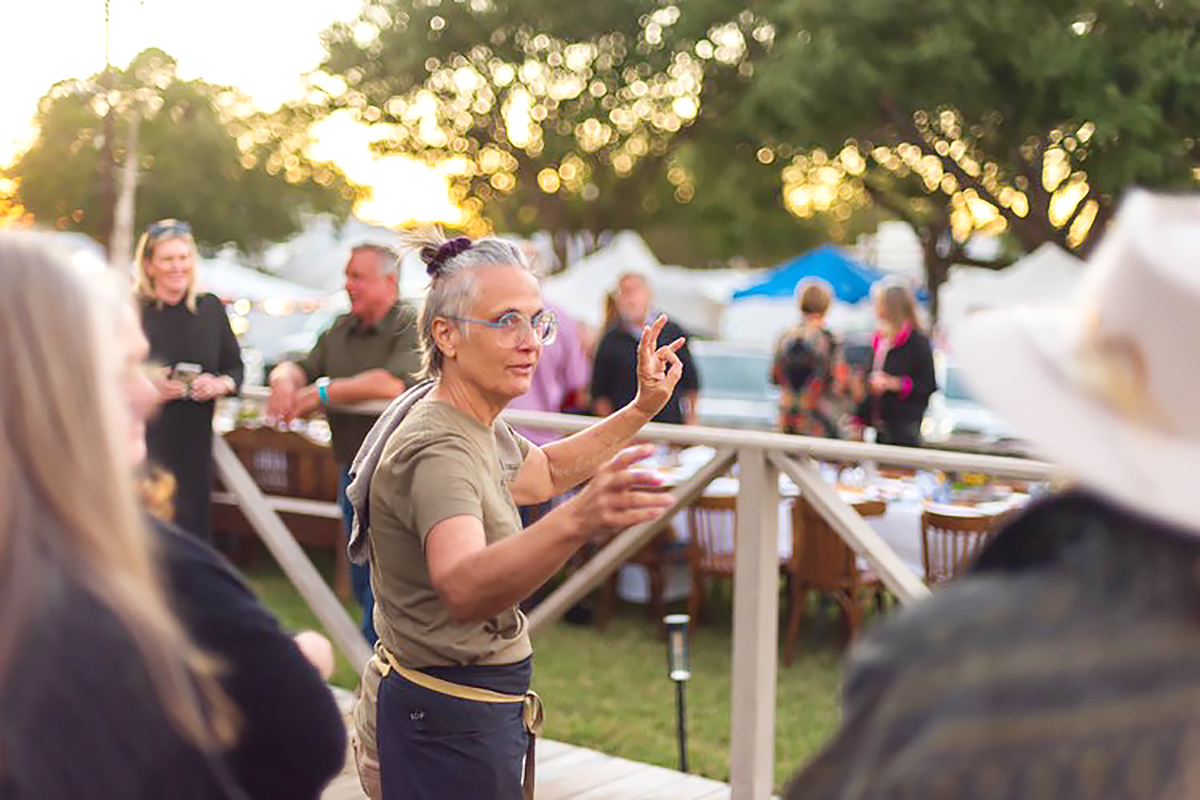 Chef Monica Pope is once again about to direct her own public-facing eatery. Photo by Landon Wright Photography.

Chef Monica Pope, a two-time James Beard Award semifinalist, is returning to a dedicated brick-and-mortar. Telegram Tearoom is set to open on December 1 at 2601 Baylor in Sunset Heights. Pope, who is best known for her restaurants T’afia,  Sparrow Bar + Cookshop (which lives on as Pope’s prepared food service) and Boulevard Bistrot, stepped away from restaurant kitchens when she closed Sparrow Bar + Cookshop in 2016, but she has continued being a presence in the Houston food scene with cooking classes, pop-ups and as a vendor at area farmers markets.

Pope is no stranger to farmers markets. During her days at T’afia, she was a pioneer of Houston’s farm-to-table movement, and hosted a weekly Saturday farmers market there for years.  She continued that path at Sparrow Bar + Cookshop, which closed six years ago.

Since closing her last restaurant, Pope battled breast cancer and won, and was something of a nomadic cook hosting dinners and events around Houston, while still maintaining close relationships with local food producers. Telegram Tearoom will give Pope and her patrons a consistent home base for her work, albeit a non-traditional one. Pope said she’d never open another restaurant and is calling Telegram Tearoom a “non-restaurant.” Instead, it’s a hybrid, combining an all-day bakeshop, tearoom and “community inspired foodspace and listening room.” Consultant Hilary Hunt assisting with the design.

There’s a fairly extensive menu divided by mealtimes: hot and grab-and-go breakfast and lunch offerings starting at 7:30 a.m. then tea time and cold bites from 3:30 to 5:30 p.m. Telegram Tearoom will not have regular dinner hours. However, Pope will periodically host special ONE Table Dinner Series events. There are already tickets on sale for some scheduled on Sunday evenings. The cost is $100 per person, which includes beer, wine or non-alcoholic beverages, and the events will often feature a collaborator.

Desserts include cakes by guest pastry chefs, keto chocolate mousse and ice pops made with goat milk from All We Need Farm. An assortment of pots, puddings and fools will be available to go.

On once again having a brick-and-mortar, Pope says, “It feels full circle. It fits my definition of sustainability — to give and give until it feels like receiving. I received this gift, Telegram, and am doing what I do; creating a community piece and a place of connection. It’s not a traditional brick-and-mortar at all. With the all-day café and special experiences meant to connect the community, it’s the new way forward and a new business template.”

John and Veronica Avila, owners of Henderson & Kane, are helping Pope with the space. “We love Monica and we’ve done everything we can to make sure she has what she needs for the business,” said Veronica. “John and I came up with the concept and name, and guided the design. Knowing we are going into the farmers market a few blocks away, we see opportunities for the two places to work together and feed from each other.”

As one might expect from her long history, Pope’s food offerings will be seasonally driven, ever-changing and composed of local ingredients. As the name implies, there will be tea, but also coffee, wine, beer and other beverages.

Those assisting Pope include her longtime right-hand man, chef Tim Smith, and Brazos Bagel owner Zachary James, who is also a musician. “Tim is bringing his experience and passion for the cooking Monica does, while I will bring Brazos Bagel, the music side and my 20 years as a strategy and leadership consultant,” explained James.

Two of Telegram Tearoom’s first vendors are local coffee roaster Sean Marshall of Fusion Beans and Karena Meyer of Drink Fuzz, a low- and no-alcohol bottle shop. Pope also plans to invite fellow chefs, farmers, local artists and artisans, writers and health and wellness providers as vendors and/or event participants. Among its features, Telegram Tearoom will have a shop to showcase local products and ingredients.

On Tuesday nights, from 5:30 to 7:30 p.m., Pope is hosting her Story Thyme cooking classes. The cost is $100, which includes “a spontaneous evening of local and seasonal food” and drinks. As of this writing, one of the December classes is already sold out.

Once Telegram Tearoom has time to get established, Pope wants to expand the brand and incorporate a multimedia aspect with Telegram Sounds, a platform for a podcast and record label featuring “a low-key, intimate music performance series, which will explore the connections between music, food, creativity, expression, and community.”

After spending six years keeping up with Pope through sporadic dining events, to-go meals and farmers market appearances, it seems certain that her fans will be pleased to have a public-facing venue to visit again at last.