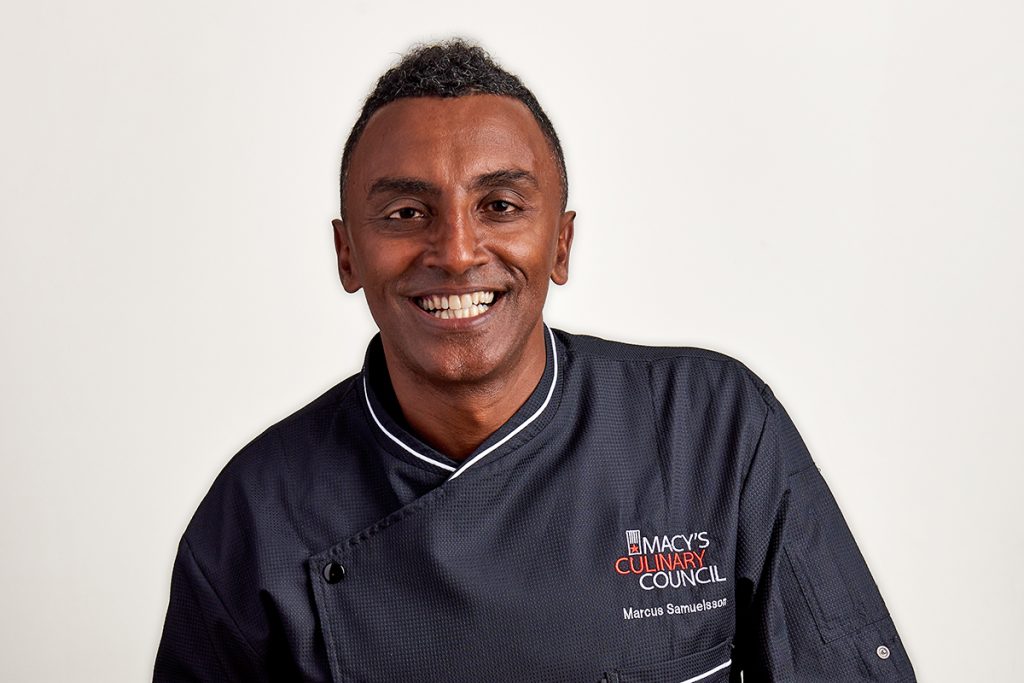 The Macy’s Culinary Council event series often brings some of the country’s most beloved chefs to Houston — and another one is about to hit town. On Friday, March 15 at 6:30 p.m., James Beard Award-winning chef, restaurant owner and author Marcus Samuelsson is doing a cooking demonstration at the Macy’s Memorial City location at 900 Gessner. Attendees even get samples and recipe cards for the springtime dishes he’s demonstrating.

As if those aren’t enough reasons to go, ticket holders also get a $10 Macy’s gift card and a copy of Samuelsson’s The Red Rooster Cookbook. After the cooking demo, guests can line up to briefly meet the chef and get the new cookbook signed. Tickets are required and can be purchased online.

Samuelsson hardly needs an introduction but his story is worth repeating. To say his life had a rocky start is an understatement. Samuelsson was born in Ethiopia and lost both his parents at age three when the area suffered a tuberculosis epidemic. Thankfully, both he and his sister were adopted by a Swedish couple who provided a good life for them. According to a New York Times profile, “Mr. Samuelsson fell in love with cooking in his maternal grandmother’s kitchen and went on to study at the Culinary Institute in Goteborg and to cook in a local bakery and then small restaurants. Later, he studied in Switzerland and Austria.” In 1991, he landed an apprenticeship at famed Aquavit in New York City. Four years later, he became the executive chef — and thus a remarkable career started.

Many food enthusiasts probably first saw him on Food Network shows such as “Chopped: All Stars” — which he won. He currently owns three restaurants in New York City: Red Rooster Harlem and Ginny’s Supper Club. In addition, he’s a multiple-time James Beard Award winner, was the youngest person to ever receive a three-star review from the New York Times and executed President Barack Obama’s first State dinner. In addition to The Red Rooster Cookbooks, he also wrote the memoir Yes, Chef and Make It Messy: My Perfectly Imperfect Life, a book to encourage young adults to follow their dreams. Those are just a few highlights from his career achievements.

Macy’s Culinary Council events like these happen regularly at locations around the country. To see what other celebrity chef events are coming up, visit the website.