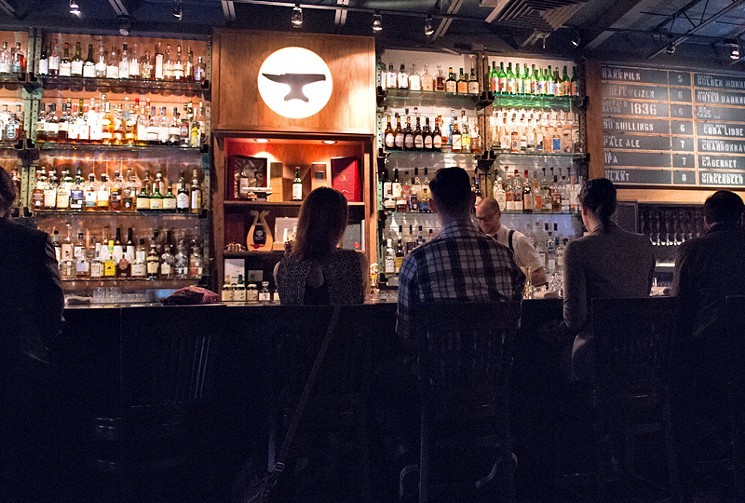 Out of over a dozen James Beard Award semifinalists in Houston—the most ever—the only one to make it to the 2018 list of finalists is Anvil Bar & Refuge for Outstanding Bar Program.

Let’s be clear: Anvil Bar & Refuge is as overdue as it is highly deserving, so we should be happy about that finalist nod. Co-owner Bobby Heugel is one of the pioneers of returning quality to cocktails in America. Perhaps even more significant, though, is how almost every bartender who works at Anvil ends up taking a top position at one of Heugel’s other bars (or opening their own) and expanding the good news of craft cocktails. They include general manager Terry Williams who oversees some of Heugel’s other bars; Peter Janke of Tongue-Cut Sparrow (another Heugel bar); Robin Berwick who runs Double Trouble Caffeine & Cocktails;  Alex Gregg who went on to open Moving Sidewalk (and who recently relocated to San Diego); Alba Huerta, who owns Julep and just published her cocktail book; Alex Negranza of the Heugel- and chef Justin Yu-owned Better Luck Tomorrow; Justin Burrow, who opened Bad News Bar; Yao Lu, co-owner of Union Trading Co. in Shanghai; and so many more. Maybe there needs to be a special award created just for Anvil; something like “Most Influential Bar,” “Bar Godfathers” or “Good Luck Forgetting About Me Tomorrow.”

Overall, though, the finalist list seems as much a snub as it does a step backwards for the Beards. There’s been a concerted effort in the committee to increase diversity in the nominee list. There is no culinary scene more diverse—and more excellent in overall quality and interest—than Houston’s. It would have been great to see someone like Jaisinghani step up to the short list.

The clear message to Houston is that after having three chefs win the Best Chef Southwest category for three out of the last four years, this year it has to take a back seat. In fairness, like Anvil, chefs Martin Rios of Restaurant Martín in Santa Fe and Bryce Gilmore of Barleyswine in Austin have been nominated over and over again—for years. Steve McHugh of Cured in San Antonio is more than worthy. Is it no less their time than it was ours four years ago, when chef Chris Shepherd won Best Chef Southwest after a 19-year drought?

So, fine—maybe not having even a single Houston finalist in that category is fair. The more important hope for this year, though, was that the city would have a breakthrough for one of the other national categories. (The Outstanding Bar Category that Anvil is a finalist in is one of those.) Hugo’s was a semifinalist for Best Service, for example, and Pappas Bros. Steakhouse was nominated for the first time for Outstanding Wine Program. That wine program, by the way, has been “outstanding” for years. So have programs for wine bars like 13 Celsius and Camerata, neither of which have even been semifinalists yet.

Houston deserves that national level of recognition. There’s been a veritable parade of culinary celebrities and critics who’ve marched through over the past few years and declared it one of the best—if not the best—food cities in the United States. That includes Anthony Bourdain, David Chang and Tom Sietsema of the Washington Post. Incidentally, Sietsema has a well-deserved nomination for his excellent article on what it was like to be dishwasher for a night at Caracol—a Hugo Ortega/Tracy Vaught restaurant in Houston. It’s a great read.

It’s comforting to have such high-level, vocal advocates but as far as the James Beard Awards go, it hasn’t seemed to translate or sink in yet that Houston is nationally significant.

Really, though, does it even matter? As much as we are in love with the idea of Beard awards for Houston, it’s turning out to be something of a bad romance. We get teased, rejected and then rewarded just enough to get our hopes up again.

Here’s the good news, though: ultimately the chefs, restaurateurs, bar owners and everyone else who works in the industry don’t do it to win awards: they do it to make a living doing what they love, and to make people happy.

As diners, we support their businesses and love them back for their work. Hopefully that is better than an award and provides some comfort for those who no longer have a reason to go to Chicago in May.