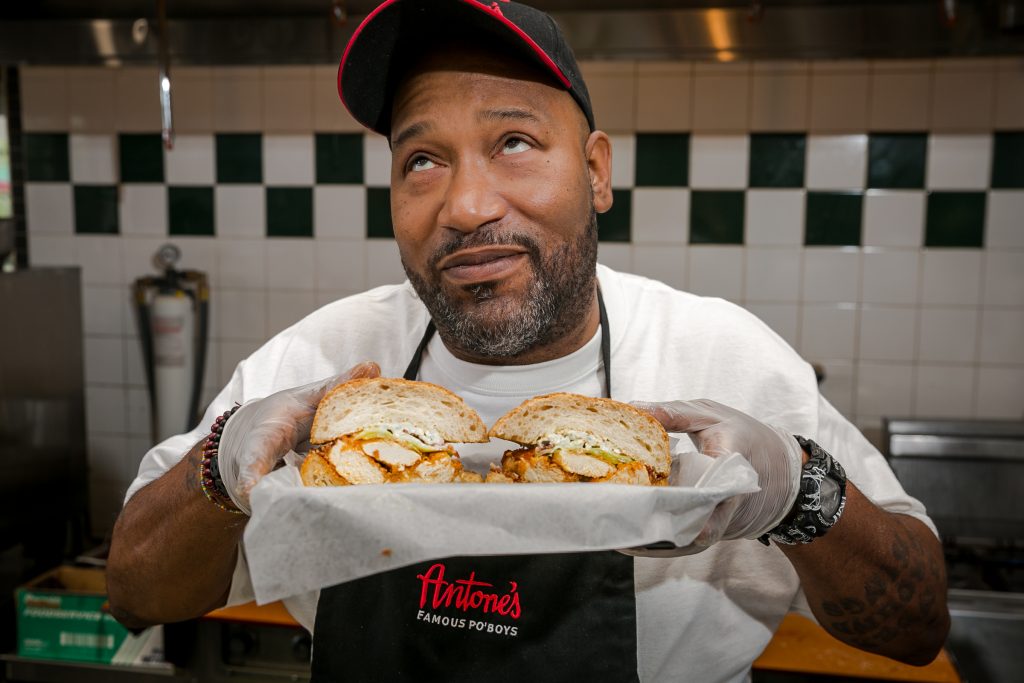 Clearly, Bun B is communicating that he thinks his sandwich at Antone's Famous Po' Boys is heavenly. Photo by Emily Jaschke.

Whether or not you agree that its Tex-Mex Cheesesteak is the best-in-category in America, it’s undeniable that Antone’s Famous Po’ Boys — and its most popular sandwich first created by Jalal Antone 57 years ago — is a staple of Houston’s dining landscape. The company, which Legacy Restaurants has owned and operated for quite some time now, has recruited local celebrities to come up with their own exceptional sandwich creations to benefit a charity selected by the celebrity. It’s being called the H-Town Originals campaign and, at the end, Antone’s Famous Po’ Boys is giving an additional $5,000 to the charity selected by the celebrity whose sandwich sold the best. Each is working alongside executive chef Alex Padilla (also of The Original Ninfa’s on Navigation) to develop his or her special creation.

First up is the unofficial rap mayor of Houston, Bun B. His Hot Wang sandwich is made with a breaded and fried chicken breast that’s drizzled with buffalo sauce, topped with bacon and served in a blue cheese and ranch-dressed ciabatta bun. It costs $8.95 and proceeds from it benefit Second Servings of Houston, which specializes in redirecting excess prepared food to charitable meal sites. Bun B’s Hot Wang sandwich is available until the end of September 2019.

Following him for the month of October is Whitney Mercilus, a former Houston Texans linebacker. As a business partner of One Fifth Houston, along with James Beard Award-winning chef Chris Shepherd, Mercilus is not a stranger to thinking about restaurant dishes. His beneficiary is the WithMerci Foundation that he established, which supports families of children with disabilities and special needs. This year, the charity is focusing on those living with Down Syndrome and the timing for Mercilus’s sandwich is especially good, as October is Down Syndrome Awareness Month.

Bun B and Mercilus are only the first two celebrities participating in the campaign. They’ll be followed by a slew of others. Here’s the list:

No doubt, the sandwiches these people will create alongside Padilla are going to be just as intriguing (and filling) as the first two. Additional celebrities are being announced in 2020.