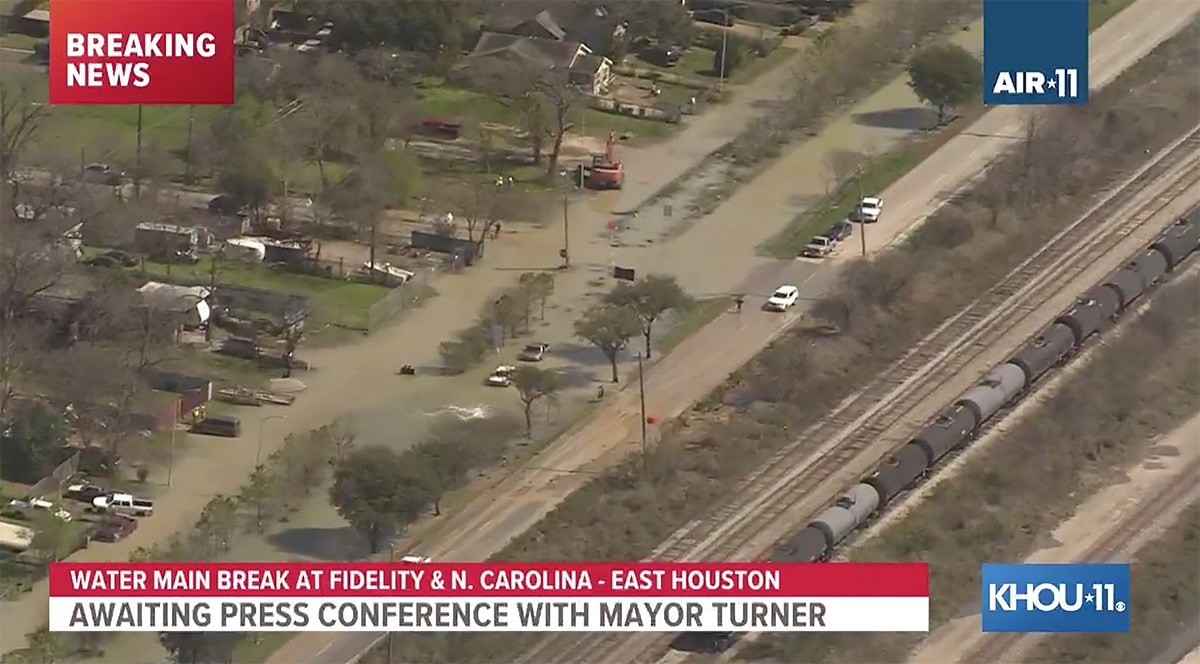 This screenshot from KHOU 11 shows the water main break that's causing some Houston restaurants to not open tonight.

This article is being continually updated as more reports come in.

An major water main break at the 610 East Loop at Clinton Drive is likely to prevent several Houston restaurants and bars from opening tonight — and possibly tomorrow — due to low or no water pressure. Miya Shay of ABC-13 news reports that it was a 96-inch pipe that burst. The area experienced high water and KHOU said that inbound traffic was backed up to the Ship Channel at one point. The Houston Fire Department rescued three people from high water, then searched and cleared several additional vehicles.

We are tracking Houston restaurant and bar closures and will update this article as more are reported. The downtown, Greenway, Montrose, Museum District, Medical Center and Heights areas were all affected. However, some appear to be a mixed bag, as some restaurants in similar areas have water and are open while others are closed. Many neighborhoods were not affected by the water outage. However, a large area of Houston is under a boil water notice for 24 hours. (See below for a map.) Before heading out tonight, the best rule of thumb is to call your destination ahead of time and avoid surprises.

KHOU reports that all H-E-B grocery stores are open. However, a Houston Food Finder reader says that at least one store has closed all cooler areas, including those for milk, cheese and meat.

According to the City of Houston Emergency Operations Center, “Food service establishments that do not have water or flushing toilets must immediately cease operations. Houston Health Department sanitarians are dispatched to the area.” The Houston Public Works department says that it could be up to 48 hours before water service is restored to affected homes and businesses.

In addition, at a press conference, Mayor Sylvester Turner recommended boiling water for the next 24 hours before use to be on the safe side. A formal boil water notice has since been issued, and citizens are asked to conserve water use at this time to help maintain water pressure. If you live in an area indicated by the map below, the boil water notice applies to you.

As a result of the boil water notice, Houstonians have cleared out many grocery store supplies of bottled water, as shown in the photo below.

Both University of Houston’s main campus and Texas State University report there is no water, so it’s a good bet that none of the on-campus restaurants are open right now. In addition, readers tell us that the Houston Zoo is closed and M.D. Anderson is also affected by the outage.

The Bar-B-Que Contest will open at 5 pm as planned. This event is conducted in a parking lot, so all areas are self-contained. Teams have potable water, hand sanitizing stations and port-o-lets. Beverages will be served in bottles & cans. Check your route to ensure a safe trip.

13 celsius, 3000 Caroline: The wine bar opened at 7 p.m., has water and is offering bottled water for consumption — as well as wine.

Brennan’s of Houston, 3300 Smith: According to a restaurant representative, after a temporary outage, water service is back and the longstanding Creole restaurant is open tonight.

Due to the #watermainbreak our Beer Garden & Restaurant and Beer Hall are closed for the moment. We will update once back to normal.

Vic & Anthony’s, 1510 Texas: According to an employee, the downtown steakhouse has water and is open.

Weights + Measures, 2808 Caroline: The restaurant is unable to open this evening due to having no water.

Agricole Hospitality (includes Indianola, Vinny’s and Miss Carousel): The company’s east-of-downtown restaurants and bar are not able to open for dinner service.

Nancy’s Hustle, 1701 Polk: One day, your chef gets nominated for a James Beard Award, and then the next, you’re unexpectedly closed. Life is unpredictable, but at least the social media manager still has a sense of humor.

The Original Ninfa’s On Navigation, 2704 Navigation: While the original EaDo restaurant is closed, diners can get their fixes of fajitas, queso and margaritas at the newer location at 1700 Post Oak near the Galleria.

Eunice, 3737 Buffalo Speedway: Like so many others, this restaurant is unable to open due to lack of water.

Alice Blue, 250 West 19th: According to a reader, the restaurant is open and rather busy tonight.

Awesome Bites, 2313 Edwards: Owner Jennifer Thai reports that she had to close her bakery early and that other eateries in the Sawyer Yards shopping center are also closed.

Fat Cat Creamery, 1901 North Shepherd: Got a sweet tooth? This Heights-area ice cream shop is open and ready to feed you.

La Lucha/Superica, 1801 North Shepherd: Both of Ford Fry’s Heights restaurants are alive and kickin’ this evening.

Samurai Noodle, 1801 Durham: The ramen shop is open and serving patrons big, hot bowls of tasty broth and noodles. The Katy location is also in operation, as that area wasn’t affected by the water main break.

Sticky’s Chicken, 2311 Edwards: This new spot in Sawyer Yards isn’t open this evening thanks to the water situation.

The Union Kitchen, 3452 Ella: Only the Ella location is closed. All others are open and the list of those is on the website.

Cuchara, 214 Fairview: Owner Ana Beaven says, “We are serving in disposables and no bathroom is available.”

Hugo’s, 1600 Westheimer: The water is restored at James Beard Award semifinalist for Outstanding Service and it’s open for dinner.

Lucille’s, 5512 La Branch: According to a representative, the southern eatery is closed the rest of the evening.

Ramen Tatsu-ya, 1722 California: According to a representative, “Ramen Tatsu-ya is closing for the day due to very low water pressure, effective immediately.”

Riel, 1927 Fairview: Chef and owner Ryan Lachaine says that the acclaimed Montrose restaurant is open and ready to feed you.

Rosie Cannonball, 1620 Westheimer: Yesterday, Rosie Cannonball was a first-time James Beard Award semifinalist. Today isn’t as great, as the water main break is causing it to not be open for dinner. However, you can do as the French and take home a light dinner from Montrose Cheese & Wine next door, because it is open.

Tropicales, 2132 Bissonnet: Normally, this cute little Latin American restaurant is open until 9 p.m., but not tonight.

Hungry’s, 2356 Rice Village: A representative for the restaurant says it is unaffected by the water main break and is open for business this evening.

Politan Row, 2445 Times: The acclaimed food hall is having to close the rest of today but hopes to reopen at 8:30 a.m. tomorrow.

a’Bouzy, 2300 Westheimer: This restaurant specializing in bubbles is apparently unaffected by the outage and open.

Backstreet Cafe, 1103 North Shepherd: The water was out earlier, but it’s back now and the restaurant is open for dinner.

Brasserie 19, 1962 West Gray: According to a Facebook post, the restaurant is closed the rest of the day.

Relish Restaurant & Bar, 2810 Westheimer: The breakfast, lunch and dinner spot posted on Facebook that it had to close early today due to the water outage.

State of Grace, 3258 Westheimer: Ford Fry’s first restaurant in Houston is open for business, according to executive chef Bobby Matos.

Houston Food Finder with Houston Cider Company.24 hours ago
Show your Pride and support the Montrose Center, which offers health and social services to LGBTQ community members and their families. Proceeds from taproom sales of Prider, Houston Cider Company's raspberry-lemonade cider, will be donated to the clinic. This very limited, seasonal release is made with real Michigan raspberries and fresh lemon peels from California. Prider is also sold in six-packs at area retailers such as H-E-B, Total Wine and Specs, and by the pint in select Houston bars and restaurants. “We are proud to be a part of one of the most radically diverse cities in America and we are celebrating with a special release that's as vibrantly & beautifully made as our community,” says owner Justin Engle. Click the link to view the entire cider selection and to buy online!

Houston Food Finder with Phat Eatery.4 days ago
Celebrate Dad with three anniversary specials at Phat Eatery — one for each year that the restaurant has been open! The specials from June 19 through 30 are: draft beers and hot sake for $3 each, buttery, flaky Roti Canai with curry dip is $3 per order and, for to-go only, Curry Crawfish are “buy two pounds, get one pound free” at $4.99 per pound. Of course, you can grab housemade Malaysian ice cream by the pint and other delights, too. Visit for dine-in or choose takeout and delivery. Visit the website or call (832) 913-6382 for more information.

Houston Food Finder4 days ago
Only 9 of our inaugural Goodie Boxes are left, and home delivery starts next week! Get one before it disappears, receive over $200 of gifts from Houston restaurants, drink producers and other small business, and support local food journalism at the same time! Houston-area only. Click the image and get the box for a one-time support of $150 via Facebook, or visit this link and choose PayPal or the $31-a-month option.