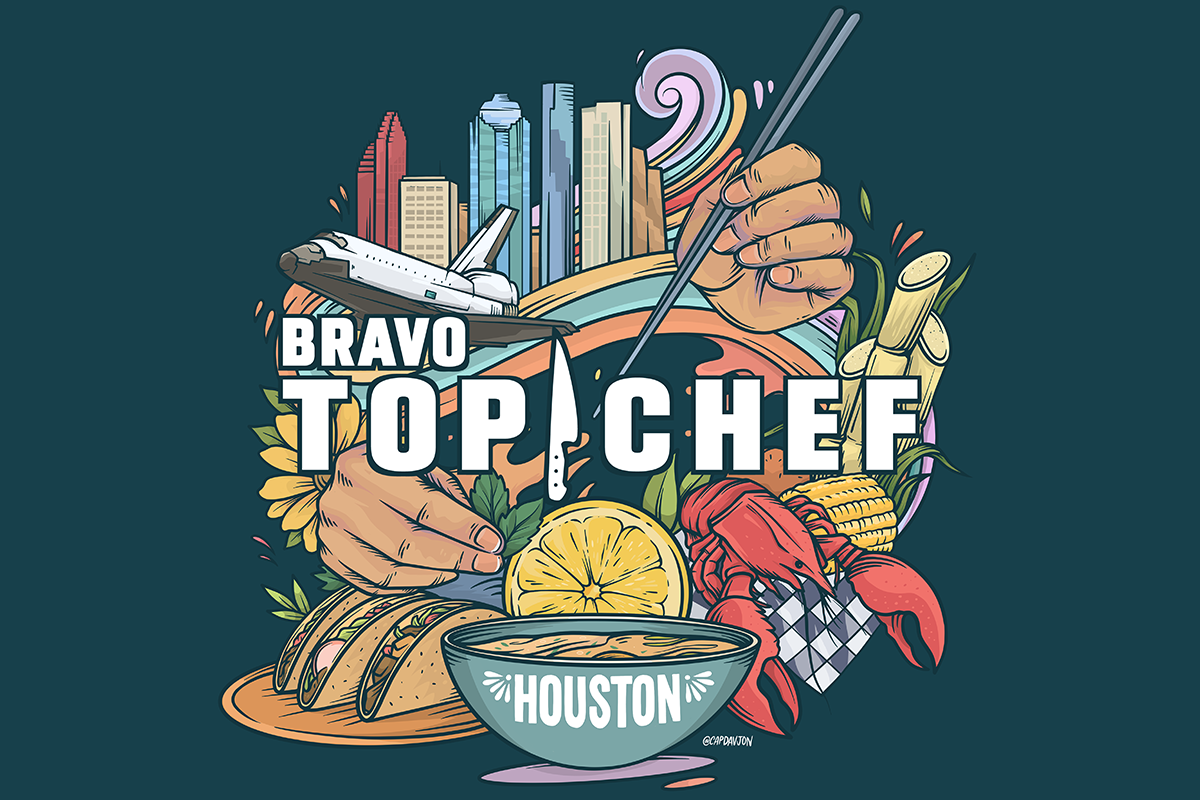 Top Chef is celebrating Houston’s multicultural culinary scene and has picked it as its host city for season 19. Artwork by David Maldonado.

It took 19 seasons for Bravo’s Emmy and James Beard Award-Winning series “Top Chef“ to fully explore Houston’s culinary excellence. Often considered the nation’s most diverse city, Houston, with restaurants offering over 140 different cuisines, epitomizes what the show is striving to represent: an American culinary landscape where many cultures rub shoulders. Accompanying the announcement is artwork from local artist David Maldonado that represents some of Houston’s many culinary influences, as well as unique features of the city, such as the space program and the iconic downtown skyline.

“I cannot think of a more perfect pairing than ‘Top Chef’ and the City of Houston. Both represent a celebration of cuisine, culture and innovation,” said Houston Mayor Sylvester Turner via a press release from Houston First Corporation, the entity behind the Visit Houston tourism website. “We are proud of the diverse community and unique heritage that makes our city such a hot culinary destination — from classics like Tex-Mex and barbecue to local inventions like Viet-Cajun and Japanese Tapas. As any ‘Top Chef’ contestant will tell you, the best food is born out of passion, and Houstonians exemplify this idea with every dish we create.”

Much about this season is still to be revealed, such as competing chefs, guest judges and where the events will take place.

For those who haven’t seen the show, “Top Chef” is an easily digestible hour of enjoyment for any food connoisseur looking for insight into how professionals approach their craft. The critically acclaimed series features a culinary competition that pits 15 skilled chefs against one another in a high-stakes kitchen environment. Often, contestants  showcase the complex flavor combinations that are representative of their heritages. The show also offers viewers insights into how chaotic restaurant life can be.

Several prior “Top Chef” contestants are making appearances this season, including Beaumont’s Tiffany Derry, the  “Top Chef” Season 7 “fan favorite” and a “Top Chef: All Stars” season 8 finalist and who turned her first reality show appearance into a bustling culinary career. She not only operates her own brand, Roots Chicken Shak in Plano, but also regularly appears in episodes of other reality shows, such as “Bar Rescue,” “Chopped Junior” and “Top Chef Junior.”

“This is one of my favorite cities and such a great location for “Top Chef” with its diverse culinary scene,” said Derry. “I can’t wait to see what the Cheftestants have to offer!”

Other returning “Top Chef” favorites  include Houston’s own Dawn Burrell of forthcoming Late August, who was finalist last season; James Beard Award-winning Stephanie Izard of Chicago’s The Girl & The Goat; and James Beard Award-semifinalist Claudette Zepeda of VAGA Restaurant & Bar in San Diego (a restaurant with a Houston connection: its beverage manager Alex Gregg was former co-owner of Moving Sidewalk).

Despite the food and beverage industry being disrupted tremendously by the COVID-19 pandemic, Houston’s multifaceted hospitality scene remains incredibly resilient and optimistic through it all, and that dedication is going to make for some great television.