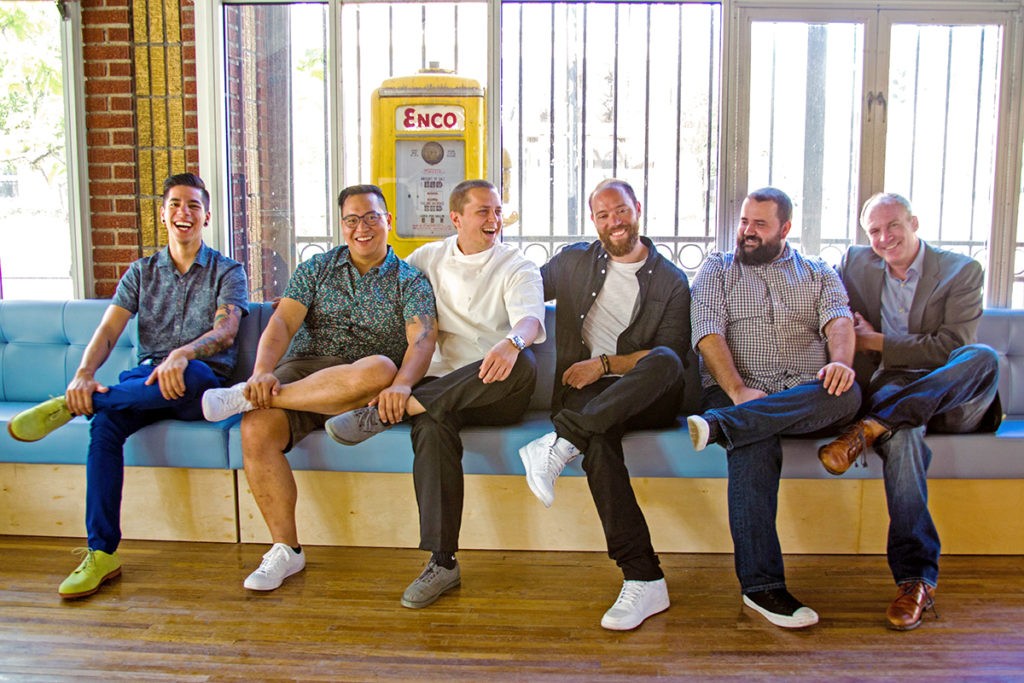 The long-awaited concept from James Beard Award-winning chef Justin Yu of recently closed Oxheart and Anvil Bar & Refuge’s Bobby Heugel finally has a name—and a timeline for opening. It’s called Better Luck Tomorrow and is anticipated to debut in late April at 544 Yale in the former Dry Creek Cafe building.

The name can be interpreted as either a sincere wish or a sarcastic one, which falls much in line with the dry humor of the principals. Joining them in the endeavor is longtime business partner Steve Flippo, who is also involved with Anvil and Underbelly.

Yu’s partner in Public Services Wine & Whiskey, sommelier Justin Vann, is overseeing the “aggressive” wine list. It will include an ever-changing “Break-Even Wine selection, offered at-cost to customers. The program is modeled after the Break-Even Bottle one that’s been in place at Anvil the past few years. According to the press release, “Each Sunday, Vann will open a rare, high-end bottle of wine, and glasses will be sold at cost until the bottle is gone. The following Sunday, he’ll select another bottle, giving customers the chance to taste high-end wines at a more affordable price point.”

Terry Williams, who has served as general manager at Anvil for years, is being promoted to an operations director role at Better Luck Tomorrow. Anvil bartender Alex Negranza has been at upstairs hideaway Tongue-Cut Sparrow since it opened in February, but he will move to Better Luck Tomorrow to be its bar manager. (Fun fact: Negranza was a barista until he moved to Houston, so perhaps good coffee will be available, too.)

Although it’s being called a bar, it will also feature a full-fledged menu that, according to the press release, allows Yu to “showcase his creativity and sense of humor with everyday food, rather than a tasting menu.” Chef Matt Boesen has been tapped to oversee the kitchen. His experience includes chef de partie at Oxheart after building his résumé at Aziza, Prospect and Benu in San Francisco. Most recently, he was sous chef at Hunky Dory.

Yu says the menu will be like, “food we’d make for our friends,” but there will be some “cheffy” details. Take, for example, the “Party Melt,” a patty melt that features Texas beef patties, crispy cheese and caramelized onions that Yu says “would make any French chef proud.” Bread is being baked in-house for those sandwiches as well. Yu is considering using Texas wheat for that.

“We’re always going to base things off of products we can get locally. That’s how dishes are formulated. We’re not going to get an idea first and then try to fit products around it. It’s always products first,” explained Yu. An example of this hyper-seasonality: one of Better Luck Tomorrow’s first dishes, developed by Boesen, is snap peas seasoned with butter, mint and horseradish. “We’re opening in spring and it’s the height of pea season,” said Yu. “It’s great. It’s something light and you can snack on it or use it as the first dish before other dishes if you want. That dish is totally Matt and in season. When it’s not in season—especially when it’s not as sweet and vegetal—we’re just not going to use them any more. We’ll move on to something else.”

(By the way: nighttime workers, rejoice, for food will be served until midnight seven days a week.)

Of course, with so many Anvil alumni involved, there has to be cocktails, and so there are. Some of the 10 drinks on the list will incorporate Gulf Coast ingredients and garnishes, the result of bar staff interacting with what Heugel calls a “highly skilled and capable kitchen.” For example, while strawberries are in season, they’ll be preserved by way of jams, syrups or traditional Tequila por mi Amante, which tequila is infused with strawberries for a few weeks. The Gibson, which features house-pickled onions with herbs and spices, will be offered as well.

Yu gave another example of the intense bar-kitchen interaction: he bought all the grapefruit from a local orchard and will work with the rest of the staff to preserve zest, make grapefruit jam and develop a cocktail that uses those ingredients.

Heugel says that the opening bartending staff members all have at least four years of experience and are required to undergo the same rigorous training program that Anvil’s bartenders have to go through. It includes, for example, being able to identify 47 out of 50 spirits from smell and appearance and flavor alone. Happy hour will be offered starting about a month after opening. Prices are also in line with Anvil: no cocktail exceeds $12. (At Anvil, the only cocktail more expensive than $12 is the Ramos Gin Fizz.)

As far as looks go, Better Luck Tomorrow is eschewing the ubiquitous recycled-reclaimed-throwback motif in favor of lots of neon, with colors inspired by the Dan Flavin installation at Richmond Hall. Booths will be upholstered in blue leather and the bartop is brass. Two outdoor patios should provide plenty of areas to lounge when Houston’s being blessed with good weather.

With so many award-winning and nationally recognized people involved, Better Luck Tomorrow has excellent potential to meet its stated goal: “to perform in ways that challenge current standards.” Keep up with the bar’s progress on Facebook, Instagram, Twitter or via the forthcoming web site. Better Luck Tomorrow will be open seven days a week from 3:30 p.m. to 2 a.m.