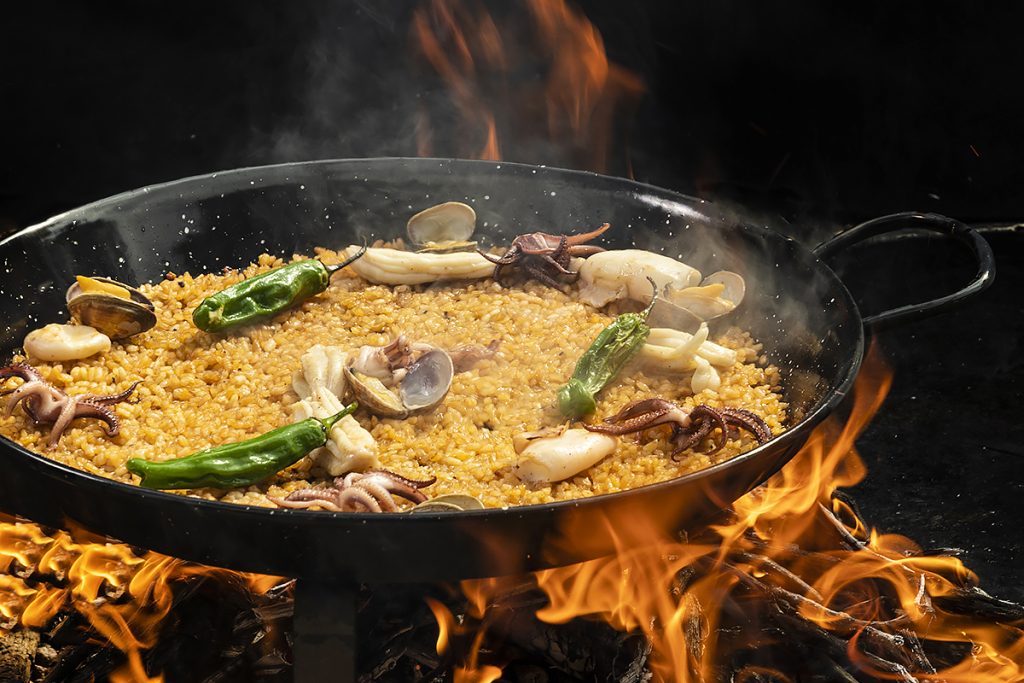 Arroz de Calamares with Almejas y Shishito, or paella made with Bomba rice with calamari, clams and shishito peppers. Photo by Julie Soefer.

The eagerly awaited MAD, a new restaurant from BCN owner Ignacio Torras and executive chef Luis Roger, finally has an opening date. Located at 4444 Westheimer in the River Oaks District, it is opening its doors to the general public on June 19. Also guiding MAD is general manager and sommelier Sébastien Laval.

While BCN is inspired by Barcelona, MAD takes its culinary cues from various Spanish regions and design cues from Madrid. (The restaurant names refer to the airports of Barcelona and Madrid, respectively.) “With MAD, we hope to continue highlighting the evolution of Spanish culinary experience and spotlight the traditional tapas and paellas which strongly label Spanish cuisine around the world,” said Torras via a press release.

After BCN opened, Roger quickly established a reputation as one of Houston’s best chefs, creating (admittedly pricey) dishes with the finest ingredients he can put his hands on. That sometimes means sourcing locally and sometimes means importing ingredients from his native Spain or elsewhere. Such is the case for the Foie Gras Cornetto; a “scoop” of savory foie gras terrine with duck consommé glaze on a small cone. It even has sprinkles. (According to a representative, MAD’s price point is intended to be somewhat less than BCN.

There is also a strong focus on creating authentic paella cooked over a wood fire. MAD is importing Spanish rice for this and plans to offer “six or seven preparations daily.” Some examples include Arroz con Calamares, Almejas and Shisito, or wood-roasted Bomba rice with calamari, clams and shishito peppers. Those wood-burning fires are also being used for roasting whole fish.

BCN is well-known for Jerry Argüelles’ creative and refreshing gin and tonics. MAD also has a gin focus but the drinks are going to be different from BCN’s. One example is the Green Tea Gin & Tonic, made with Roku Gin infused with matcha tea, ginger, lime, bergamot (the component that gives Earl Grey tea its distinctive scent and flavor) and Fever Tree Mediterranean. It can be ordered as an individual drink or batched for up to four people with “tray service.” Look also for some unique savory cocktails, such as the Paella Gin & Tonic made with Gabriel Boudier Saffron Gin, tomato, lemon, egg white, smoked paprika, 1724 tonic water, and garnished with candied dried shrimp.

Guests can enjoy these not only during restaurant hours but also late at night. MAD is keeping the bar and lounge part open until 1 a.m. Thursdays through Saturdays. Going along with the drinks is a late-night bar bites menu — which makes a great deal of sense considering how important tapas are in the bar scene in Spain.

Unlike BCN, which is located in a Mediterranean-style house that can be a bit “cozy” when completely full of guests, MAD is a roomier 6,000 square feet. That allowed room for not one, but two kitchens, a main dining room that seats 122, multiple private dining spaces and seating for 20 at the bar. Outside is a patio that can seat 16, four 130-year-old olive trees (the planting of which required special permission from the City of Houston) as well as a “mischievous” mural along an outside wall — an unapologetic attraction for Instagrammers.

The mural was designed by Barcelona-based Lazaro Rosa-Violán, who was hired to create MAD’s environment, with the goal being, “a stylish space that captures the liveliness and character of the streets of Madrid and infuses the latest in vanguardism design.” The features include moving mirrors above the bar (which sounds like it could be a little trippy for those who’ve had one cocktail too many), Pablo Picasso paintings (yes, authentic originals, not prints) and Brutalist artworks.

Upon opening, MAD is serving only dinner Tuesdays through Sundays from 5 p.m. to 10 p.m. The owners expect to add a lengthy lunch period — from 11 a.m. to 5 p.m. — Tuesdays through Saturdays. Visit the MAD website or call (281) 888-2770 for more information and reservations.