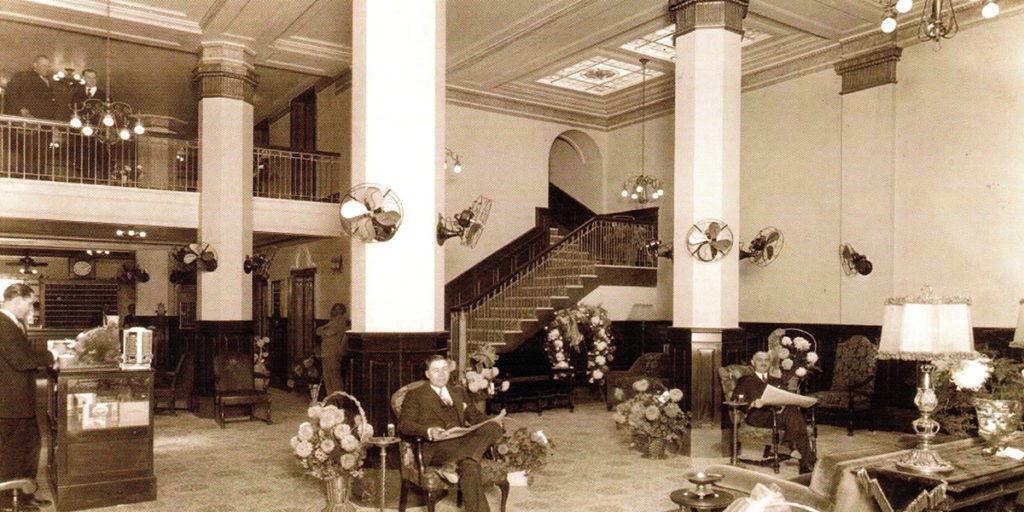 The lobby of the Auditorium Hotel (now the Lancaster Hotel) on opening day: November 21, 1926.

The historic Lancaster Hotel at 701 Texas Avenue is celebrating its 90th anniversary by offering $90 room rates and a $90 prix fixe menu for two in its in-house restaurant, Bistro Lancaster. The special is available only for the next two Sundays: November 27 and December 4.

To book a room at the special rate, visit the Lancaster Hotel web site and use discount code 90. Call Bistro Lancaster at (713) 228-9502 to make dinner reservations.

When reserving, there are some items that can be conveniently included to “sweeten the deal”: a bottle of house wine ($45), house sparkling wine ($35), a fruit and cheese plate ($18) or chocolate truffles ($10). Room service fee and gratuity is not included.

The Lancaster Hotel is located across the street from Jones Hall and mere blocks from Wortham Center, Revention Music Center and the Hobby Center For The Performing Arts. So, an ideal Sunday plan might be to check in at the hotel, catch a matinee performance at one of the nearby venues and then return to Bistro Lancaster for dinner.

The $90 dinner for two at Bistro Lancaster starts with a glass of house wine. Starter choices are the Bistro or Caesar Salad while entrée selections include pan-seared salmon filet, the risotto of the day, a veggie burger, the Lancaster Burger or a five-ounce USDA Prime filet mignon. For dessert, chef Fernando Huerta created a Nutella cremè brûlée dessert with Jack Daniel’s Tennessee Whiskey for dessert.

In addition to the eye-poppingly historic digs, other perks include complimentary limousine service within three miles (that’s far enough to get guests to many interesting destinations in Midtown, EaDo and Lower Montrose) and a social hour between 5 and 6 p.m. with free wine. In-room amenities include safes, mini-fridges and soundproofed windows.

Lancaster Hotel, which was originally named the Auditorium Hotel since it was across the street from 1910 City Auditorium (now Jones Hall) is still family-owned and operated by descendants of the founder, Michele DeGeorge. Many celebrities have passed through its doors since, including “singing cowboy” Gene Autry, who famously rode his horse, Champ, down the stairs into the basement. At the time, there was a hangout down there named the Stage Canteen and during World War II it served as an entertainment venue for soldiers on leave.Other notable guests have included actors Clark Gable, John Voight, Robert Duvall, Carol Burnett, Bette Midler and Hal Holbrook and opera composer Carlisle Floyd, who celebrated his 90th birthday at The Lancaster earlier this year.

The Auditorium Hotel was renamed to The Lancaster Hotel in 1982 and was designated a Texas Historical Landmark in 1984. It is Houston’s oldest continually operating hotel. People who are interested in its history can call the hotel at (713) 228-9500 to inquire about tours.