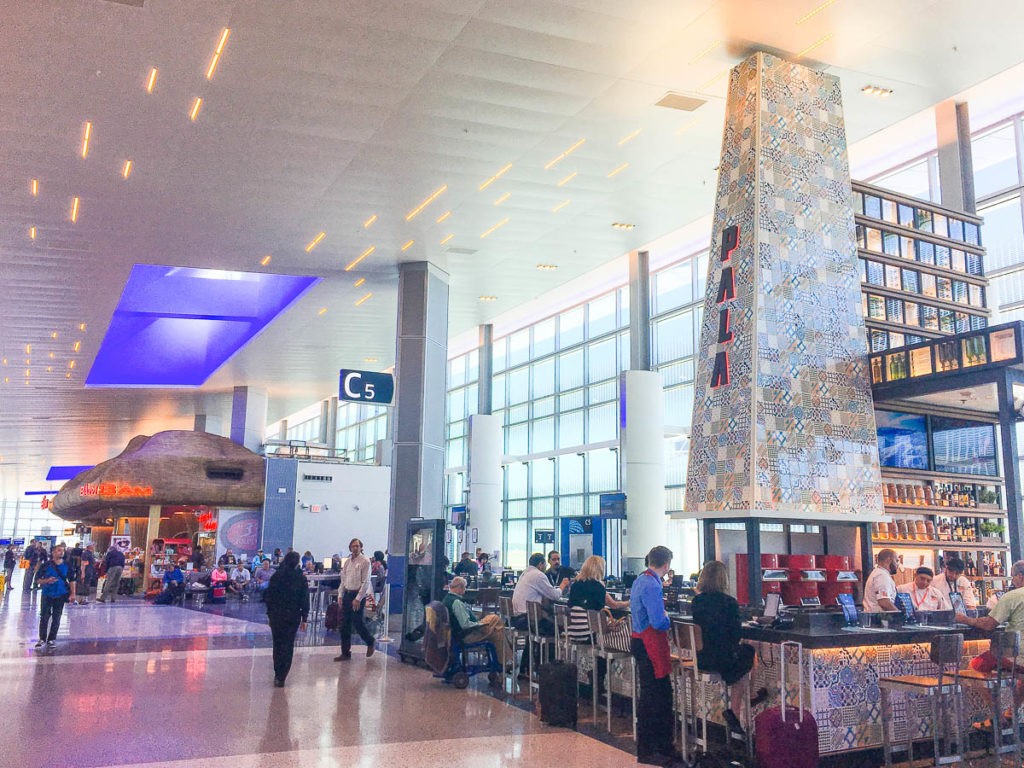 Now Open: Terminal C North (and all of its restaurants)
Photo by Phaedra Cook

A lengthy walk to my departing flight’s gate through the old Terminal C was my first hint that United’s new Terminal C North at George R. Bush Intercontinental Airport is now open. The chef-driven eateries at the terminal include Pala (curated by Coltivare and Revival Market’s Ryan Pera), Ember (from Chris Shepherd of Underbelly), Bam Bam from Cajun Kitchen’s John Nguyen and Monica Pope’s panini place, Olio. (Check out our preview report for more details on each.)

Unfortunately, I was behind schedule; boarding was in a mere 15 minutes. While I didn’t have time for a meal, I did have time to test the iPad ordering system with something that would be quick to make.

Everywhere you look in Terminal C North, travelers are relaxing at wide tables that have every seat outfitted with an iPad. The electronic tablets have a variety of functions, including games and checking on flight status. Also included is the ability to order from any restaurant in the terminal and have it delivered to your seat (even if you’re not seated in that particular restaurant).

I settled in at Pala, which was right next to my gate. Scanning your boarding pass grants access to the ordering system. I ordered a Collins. There were eight different vodkas and gins to choose from; I selected Citadel Gin, an old favorite that eschews heavy botanical notes and instead lets citrus flavors dominate.

There are still some bugs to iron out with the system and the staff seems well aware of that. A server who was circling the floor and checking on diners seemed impressed I’d figured out the iPad system by myself (it was pretty easy) and circled back again to verify I’d actually placed an order. I had, but for some reason it didn’t actually made it to the bartender. The server “manually” alerted him.

Regardless, within 10 minutes of my arrival I was starting down a frosty, well-made, lemony Gin Collins—and that sure beats settling for an airplane cocktail. Unwilling to suck it down in five minutes, I was five minutes late for my “boarding group” instead. No one yelled at me and I was none the worse the wear for my tardiness.

The modern order system at Terminal C North is a lot of fun. Just don’t miss your flight.

Houston Food Finder12 hours ago
Thanks to a fully fledged restaurant serving a menu created by Ryan Hildebrand and overseen by Efrain Villarreal Jr., as well as a freestanding ice cream stand and bar for the over-21 set, gamers who visit The Palace Social can be well-fueled and play for hours. Ryan Kasey Baker visited and has the details on this new, fun destination for kids of all ages.

Houston Food Finder with Roma Ristorante.18 hours ago
As always, Roma Ristorante is participating in Houston Restaurant Weeks 2021! Journey to Italy with a three-course dinner for $35 per person. Three dollars from each goes to the Houston Food Bank. Selections include vegetarian and gluten-free dishes. Choose from starters such as creamy Imported Buffalo Mozzarella With Housemade Pesto And Mixed Greens, crispy Fried Shrimp And Calamari With Marinara And Artichoke Sauce and hearty Meatballs With Cheese And Basil. The second course includes pasta options like spicy Orecchiette With Housemade Italian Sausage (a specialty of Chef Scarafile) and Strozzapreti with Fresh Shrimp and Housemade Pesto. Entrées include earthy Eggplant Parmigiana, Chicken Breast Stuffed With Prosciutto And Grana Padano and decadent Veal Scaloppine. Pair your meal with a selection from our extensively curated wine list. Reservations are encouraged but not required. Visit the https://romahouston.com/ for the full menu, or call (713) 664-7581 for more information.