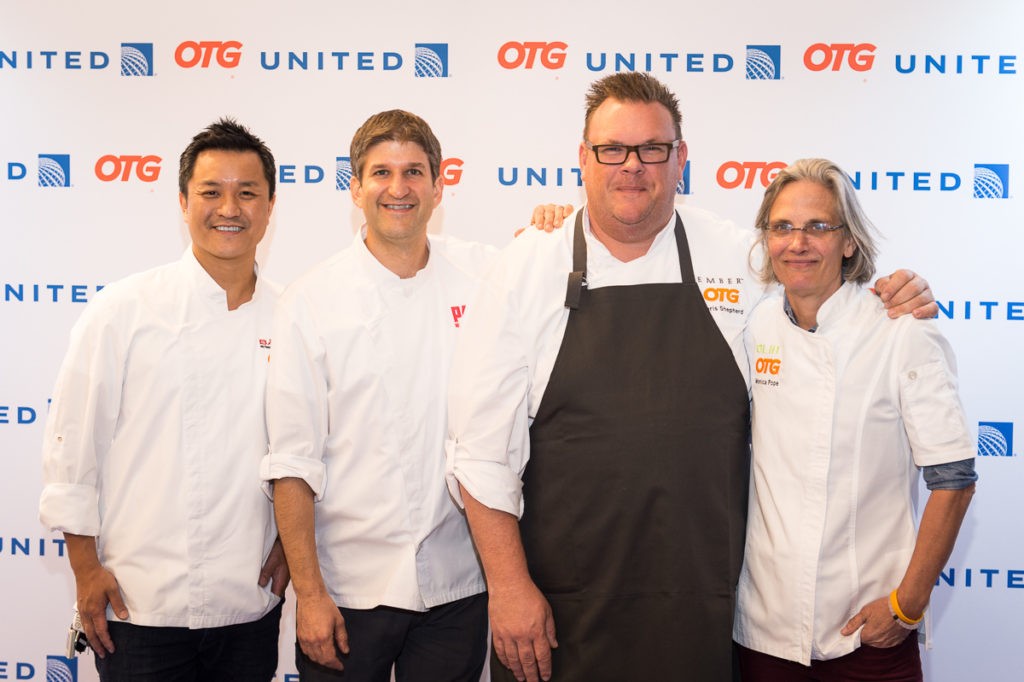 The fare that passengers get on an airplane can be hit or miss. Fortunately, dining in the airport is more sophisticated now than ever. These days, the focus is on providing travelers with tastes of the local dining scene. Like other airports, George Bush Intercontinental Airport (IAH) is embracing the trend of showcasing top-name chefs and restaurants. The forthcoming Terminal C North, scheduled to open later this month, is set to be the most ambitious combination of cuisine, shopping and passenger conveniences to-date. (An anonymous source tells us the target date is March 22.) United Airlines, retail operator OTG and the Houston Airport System are spearheading the $277 million dollar, 265,000 square foot project.

It’s rare to see a Vietnamese restaurant in a United States airport, much less one overseen by a local chef, which makes John Nguyen’s Bam Bam a notable representative of Houston’s melting pot culture. It came to be because executives scouting out potential venues for the project visited Nguyen’s restaurant in Houston’s International District, Cajun Kitchen.

“They had our signature items, like crawfish, blue crab, shrimp and snow crab. We connected, they liked the food and were interested in putting something Vietnamese at the airport. Originally it was just supposed to be Vietnamese, but the concept grew into a Vietnamese beer garden,” said Nguyen. “So, [Bam Bam] isn’t just Asian-Cajun focused but more Vietnamese.” He says to expect items like Vietnamese beef salad, Bun Thit Nuong Cha Gio (vermicelli topped with grilled pork and a deep-fried spring roll), free range shredded chicken salad and “fancy” banh mi, like a Bo Luc Lac inspired rendition. Bo Luc Lac is also known as “shaking beef.” The meat is cubed, sautéed and served with fresh tomato, onion and cucumber.

That’s just one of several interesting restaurants to choose from in Terminal C North. Located under a sprawling, artistic mesh dotted with Texas stars is Ember, a concept from Underbelly and One Fifth chef Chris Shepherd. While some of those dishes, like a 24-hour “ham brined” pork chop, char siu pork ribs, Korean fried chicken and roasted oysters mirror hearty items at his existing restaurants, others, such as grilled Ahi tuna—brought in fresh, not packaged—and ricotta salata, are unexpected.

Shepherd was approached about doing an airport concept years ago—before he won a James Beard Best Chef Southwest award in 2014. “This was one frontier where I was like, ‘If I don’t do it, I may never get to do it and I want to see what it’s like,” said Shepherd. “We travel a lot. How cool is it to come in here and see our place, have Ryan Pera’s pizza or one of Monica Pope’s paninis? That’s awesome to me.” (Pera is chef at Coltivare and Revival Market. His restaurant in Terminal C North is casual Italian restaurant Pala, while chef Monica Pope’s is panini bar Olio.)

Of importance to Shepherd when working with OTG was whether he’d be able to use the same local suppliers he relies on for his restaurants. “When OTG came to me, I asked, ‘Can I use our products?’” They said, ‘You want to use [beef supplier] 44 Farms? Of course. You want to use [produce vendor] Atkinson Farms? Of course. Who’s your bread person and we’ll use them,’” said Shepherd. “OTG goes out of their way to make sure they get the products we put our names on.” Adding to Shepherd’s comfort level is that chef Dax McAnear, formerly of The Hay Merchant and Underbelly, will oversee operations at Ember as an employee of OTG.

Nearby is Vida Taqueria by Roland Laurenzo of El Tiempo, Laurenzo’s and the newly opened Laurenzo’s Grill in midtown Houston. Also involved is Laurenzo’s son, Dominic (executive chef of all of the family’s restaurants) and chef Juan Arellano of El Tiempo. Roland Laurenzo says the process of working with OTG on the airport taqueria has been, “very smooth, a very good process. We’ve been intimately involved every step of the way in the development of the food and menu.”

The main challenge Laurenzo cited was honing processes to ensure the staff can get food out very quickly to harried travelers. Arellano added that figuring out how to execute fresh tortillas was a must. “When Vida opens, it’s going to have the fresh tortillas that we do at El Tiempo, made to order,” he said.

Some must-tries on Vida’s menu include the build-your-own guacamole bar and shrimp ceviche. “The Ahi Tuna Taco is to die for,” said Arellano. “It has chipotle aioli, a little cotija cheese and cilantro fronds. The corn salad is great—just real corn, cotija cheese, lime zest and lime juice.” Dominic Laurenzo added, “We’re trying to go for nice, clean flavors at the airport for people who are traveling.”

Olio is a “farm-to-table Panini concept,” according to chef Monica Pope, formerly of T’afia and Sparrow Bar + Cookshop. “It’s not hard to find artisan bakers and local cheese suppliers,” she explained. “These are wonderful ingredients. I didn’t do the classic Panini thing. I create a great entrée and if you want it smashed between two slices of a great ciabatta, there you go. We’ll have great salads—light, crisp, clean—and great appetizers like white anchovy cured with a little lemon. There’s also going to be Italian wines, like cava.”

Pera, who served a standout cauliflower pizza made on quick-fire ovens during a media preview, summed up the offerings of Terminal C North: “I think what stands out about this terminal is that it’s a nice slice of Houston. Obviously, it can’t empass everything, but I think whether people have a slice of pizza, steak on a grill or Vietnamese boiled shrimp, what I want them to be saying is, ‘Wow!’ There’s a nice authenticity to it. I think [the organizers] have done a good job.”