Where To Find The Best Tacos In Pearland 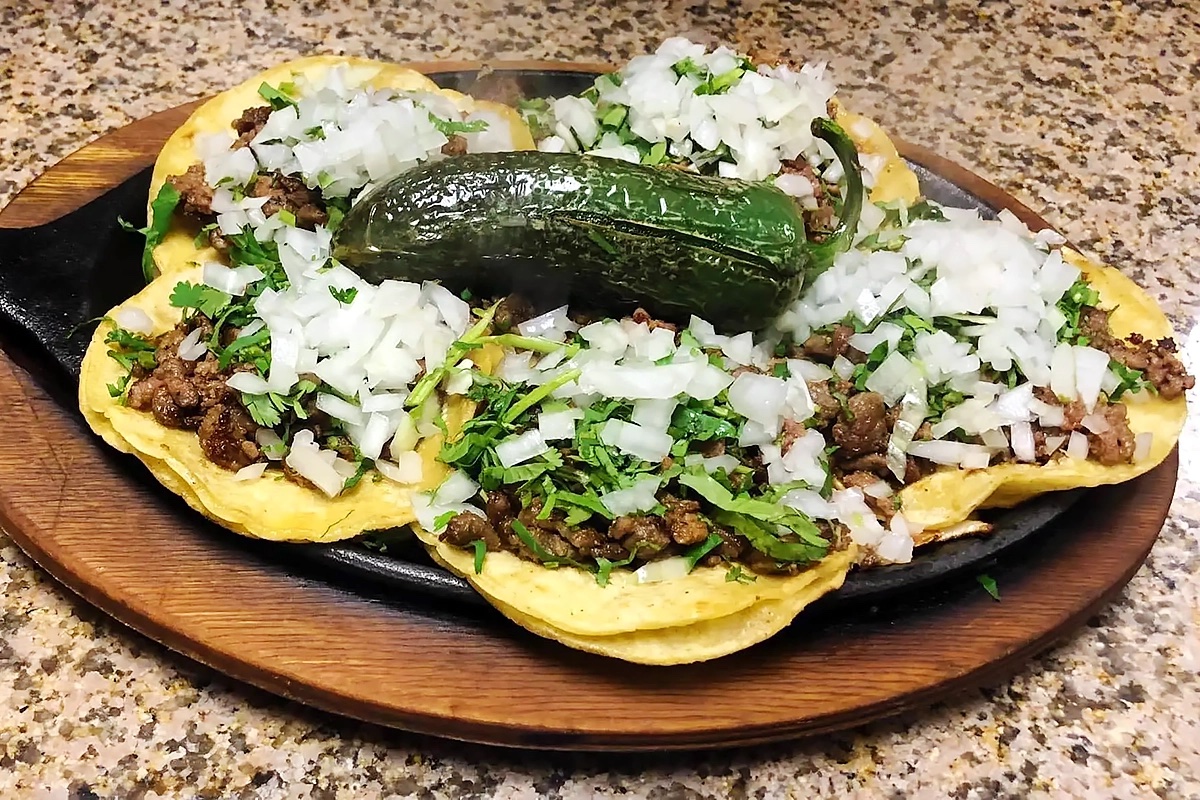 Tacos are great every day, so why wait for Taco Tuesday? Pearland has plenty of restaurants dishing up tender tortillas stuffed with flavorful fillings. There are breakfast varieties brimming with eggs, meats, beans and cheese alongside midday and evening versions showcasing seafood, veggies, specialty cuts of meat and more. When available, upscale your taco experience by pairing with indulgent cocktails such as margaritas or following up with sweet treats, like a decadent slice of tres leche. Read on below for great taco stops, and visit the Pearland Convention & Visitors Bureau website for more dining ideas.

The Box Bakery and Kitchen, 1130 Broadway: This modern family bakery and café turns out luscious desserts and tempting breakfast options, plus other delights. Texas Tacos are among the popular dishes thanks to generous amounts of flavorful fillings. Each taco starts with a housemade flour tortilla, egg and cheese. Then, guests can customize with a choice of house-smoked smoked brisket or pulled pork, potato, chorizo, bacon or breakfast sausage. These range in price from $4.75 to $6.25.

Order your tacos in a Smoked Box Lunch for a midday palate pleaser. Choose from brisket for $14 or pulled pork for $12. Each includes cheese, barbecue sauce and a choice of two sides such as Bubba’s Rice, Chipotle Lime Slaw, potato salad or Southwest BBQ Beans. All tacos are available with a keto tortilla for $1 extra. Save room for dessert, such as cheesecake, cupcakes, cookies and pan dulce.

Celaya, 3234 East Broadway: This relaxed cantina has served Pearland for nearly 20 years and offers the full menu all day from 8 a.m. to close. That means if someone wants breakfast tacos for dinner — or dinner tacos for breakfast — it’s totally possible at Celaya.

The must-try breakfast tacos are $2.50 each and come with a flour or corn tortilla and scrambled eggs, plus a choice of Mexican chorizo, potatoes, sausage or bacon. In addition, there are traditional barbacoa and carnitas street tacos with cilantro and onion (optional, of course) for $2.75. In the mornings, there are mimosas for $4.50 per glass and $12 for a carafe.

Time your visit during happy hour when house margaritas are just $2.50 each. The deal is available Monday through Thursday from 11 a.m. to 8 p.m. and Fridays and Saturdays from 11 a.m. to 6 p.m.

Donuts Kolaches and Tacos, 6125 Broadway: Visit this casual, family operated, counter-service kitchen for a broad menu of sweet and savory goodies, including fresh donuts, kolaches and generously sized, made-to-order breakfast tacos. It first opened in 2000 and has served breakfast and lunch to a growing fan base ever since.

All tacos start with a flour tortilla: the eight-inch small is $6.99, and 10-inch large is $8.99 (it’s nearly a burrito!). Fillings include the fajita taco loaded with either premium Angus beef or chicken plus bell peppers, onions, cheese and jalapeños, plus assorted morning combinations. The latter typically come with three toppings such as the sausage, potato and cheese, the bean, egg and potato, and the ham, egg and cheese. You can also choose your own blend of toppings, with additional options like chorizo and bacon. Add-ons are just 75-cents each.

Round out your order with fresh donuts like the Big Bag Donut Holes, which come with two dozen for less than $6, plus kolaches and coffee.

Gracia’s Breakfast Tacos and More, 1524 East Broadway: This beloved local spot is tucked into an Exxon gas station, but locals know it’s not the “where” but the “what”. Fans adore the Gracia family, who serve highly-rated tacos, tamales and other Mexican favorites. Order breakfast Monday through Saturday from 6 to 10:30 a.m., and choose from tacos, tortas or burritos. Tacos come with a choice of flour or corn tortilla and an egg, and tortas and burritos include an egg, beans and shredded cheese. All three include a choice of one additional topping: potato, chorizo, bacon, sausage or a la Mexicana, which is a savory combination of fresh tomatoes, onions, jalapeños and garlic mixed with eggs. Tacos start at $1.60 each, with tortas and burritos starting at $5.79. Upgrades include cheese, avocado, grilled jalapeños and fajita meat.

Lunch is served from 10:30 a.m. to 2 p.m., when the taco menu features meatier options. Singles start at $2.75 each, and include a choice of chicharron, beef or chicken fajita, spicy pork or picadillo. Additional midday selections include plates loaded with burritos, tortas, quesadillas or nachos.

The all-day menu includes empanadas and pork tamales available by the half-dozen and fajita beef tacos stuffed with grilled onions and peppers. There are discounts for military and police, catering for special events and a drive-through for purchases on-the-go.

Killen’s TMX, 9330 Broadway: Pearland chef and native Ronnie Killen first made a name for himself via his sleek steakhouse and nationally acclaimed barbecue restaurant. A few years ago, he expanded his range with a modern Tex-Mex concept that blurs the line between casual and elegant.

Visit for dinner and choose from nine taco plates made with premium fillings. Each comes with rice and a choice of black or refried beans. Options include classics such as crispy tacos with ground beef, tacos al carbon and fish tacos, but there are more intriguing options, too. The latter include Octopus Chorizo Tacos with grilled octopus, romaine, black beans, pico, chorizo and potato and Pork Belly Al Pastor Tacos with barbecued pork belly, pineapple-habanero pico, cabbage and pickled red onion. There are also fried shrimp tacos made with Crawford Bock beer-battered Gulf shrimp, mango and chipotle aioli. For those seeking variety on one plate, the La Niña, La Pinta y La Santa Maria comes with one octopus taco, one fried fish taco and one Shrimp Inferno taco, while the Street Tacos plate includes one each of suadero (a tender cut of steak), al pastor and chicken tinga (flavored with a smoky tomato sauce).

On Saturdays, guests can indulge with Mexican-style breakfast and brunch. Breakfast tacos start at $3 each and include egg and cheese plus a choice of five meats such as brisket, pork belly and chorizo. Add beans for 25 cents, potatoes for 50 cents or additional meat for $1 each. The barbacoa taco is also $3 and comes topped with fresh diced onion and cilantro.

Lila’s Mexican Restaurant, 2704 South Main: Dining at this Pearland mainstay is akin to visiting family, in part because many of the employees are family. The service is friendly and the food keeps patrons returning year after year — ever since it first opened in 1978! The current family has operated the cozy restaurant since the late 1980s.

Visit for breakfast tacos with egg plus a choice of veggie or protein like chorizo, potato, nopal or fajita. The menu expands at lunch time, with three sections devoted to this tasty staple. The à la carte taco plates come three to an order for $7.99 and include a choice of ground beef or chicken inside a crispy or soft tortilla, or in a chalupa. Alternatively, get single tacos and chalupas that start at $2.75. Rice and beans count as one side, and costs just $2.99 per order. There are Mexican Tacos filled with cilantro, onions, sauce and a choice of fajita, chicharron, barbacoa, chicken or pastor (a marinated mix of pork and beef) for $2.99 each. There are mini tacos available in sets of 10 for $10.99. Owner Abel Abarca created the signature Tacos a La Lila made with beef fajita, bacon and shredded cheese.

Taqueria Mi Pueblito, 9607 Broadway: Fans of Taco Tuesday won’t want to miss the $1 mini tacos at this Mexican kitchen. Get the deal all day every Tuesday with a minimum purchase of five tacos. Daily essentials include breakfast tacos with a choice of corn or housemade flour tortilla. All start with egg and a selection of seven additional fillings such as chicharron, nopal, bacon or potatoes.

There are à la carte tacos starting at $1.75 for corn tortillas and $1.99 for those with flour. Choose from 15 options, which include popular standbys like barbacoa, picadillo, shrimp and carne guisada, plus traditional Mexican go-tos such as tripe, nopales or lengua. Most combination plates don’t include tacos, but there are two for just $7.99 each. The Crispy Taco option comes with three beef tacos, rice, beans and salad, and the Parri Tacos are served with five fajita tacos, charro beans, grilled onions and chile toreados (blistered jalapeños). There is also a full bar and plenty of margaritas to tone down the heat.

The restaurant is open until 10 p.m. on weeknights and 11 p.m. on Fridays and Saturdays, making it a great late-night spot for dinner or a snack. Fridays also feature live music. Insider tip: dine-in at dinner and every table receives complimentary queso.

Peña’s Donut Heaven and Grill, 11601 Shadow Creek Parkway: This family-owned mainstay is popular for breakfast and lunch with a broad menu of classic diner fare such as baked goods and burgers. The tacos are delicious, too, and come available with an impressive selection of fillings.

Breakfast tacos start at $2.85 and come with a choice of three ingredients; add-ons are 75 cents each. There are meats like chorizo, two kinds of sausage, ham and bacon, veggies such as onions, mushrooms and spinach, plus cheese, refried beans, and both bell and spicy peppers. Specialty meats are $1.50 extra and include brisket, ribeye and barbacoa. Stop by on Tuesdays and get two tacos for $4.

There are two styles of street tacos, and both are served on corn tortillas: barbacoa comes with cilantro, onion and queso fresco and brisket includes pico de gallo, barbecue sauce and queso fresco. For lunch, you can get the street tacos that come two per order with a side of sweet potato fries.

Round out your meal with a sweet treat. There is a large selection of donuts for every taste such as maple-iced, strawberry-filled and apple fritters.

You can also check out the Pearland Convention & Visitors Bureau on social media for the latest updates. Follow on Facebook, Instagram and Twitter. There is even a YouTube channel with videos that take you right to the people and places that make Pearland a great food and drink destination!