Where To Find The Best Breakfast In Pearland 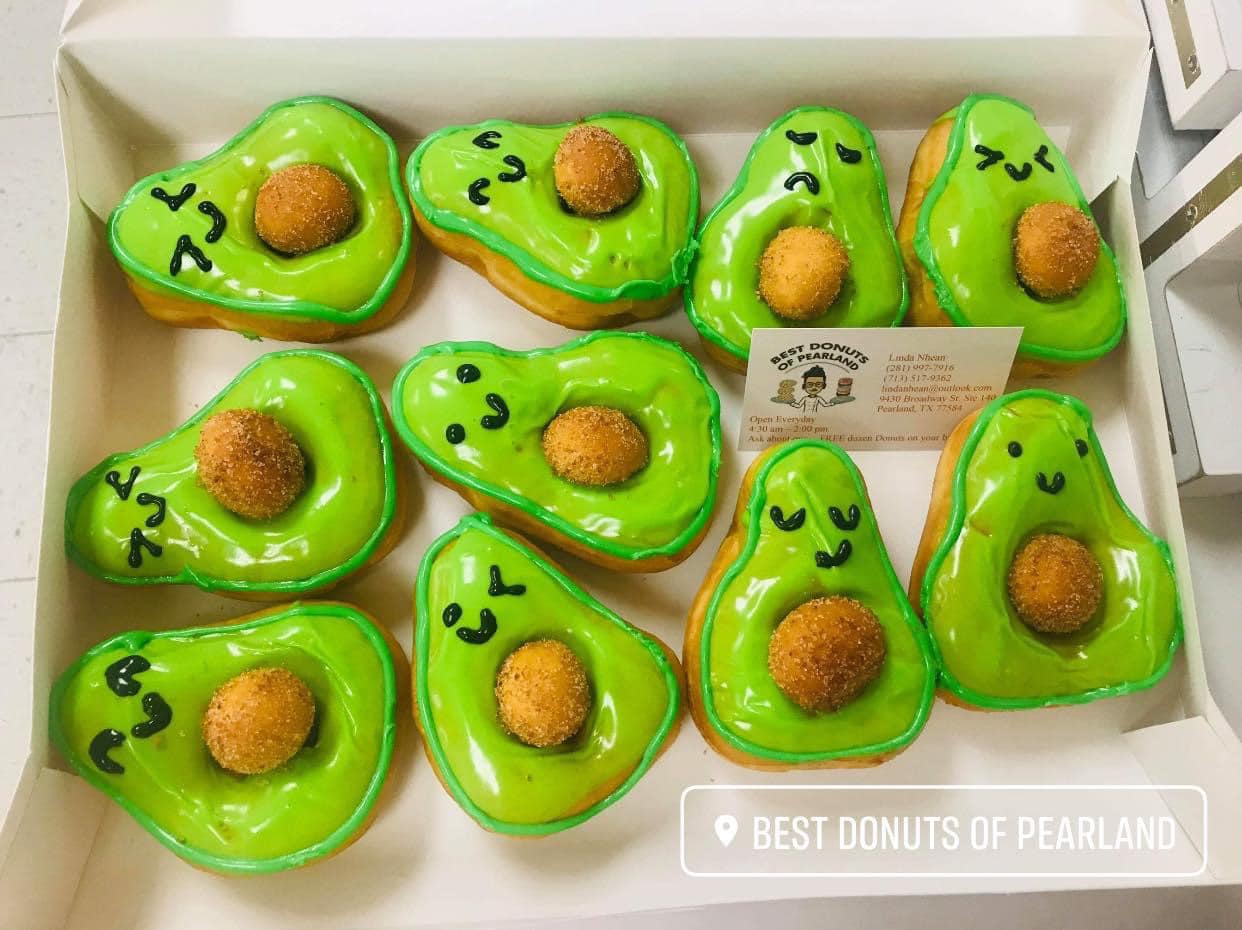 Avocado-themed donuts are as adorable as they are delicious. Find them, and other creative designs, at Best Donuts in Pearland. Courtesy photo.

Some like breakfast savory, some like it sweet. But whichever you enjoy, Pearland is full of locally owned sources for morning fare that includes donuts, kolaches, tacos — and, of course, coffee. There are also two can’t-miss brunch spots for weekend indulgence. Read on for the best places to break your fast, and visit the Pearland Convention & Visitors Bureau dining page for more great ideas!

Best Donuts, 9430 Broadway: This fun and quirky bakery offers an abundance of treats to get your day started on a tasty note. Its claim to fame are custom donut letters and numbers. Guests can choose the icing colors, sprinkles, special decorations, flavors and more. These require one-day notice to order, and start at $1.39 per letter/number. Another big draw are the Birthday Donuts. Customers ages 16 and older can visit on their birthday, show a valid ID and receive one dozen donuts for free; guests under age 16 receive a free donut (no ID required.). Daily specials make breakfast a breeze. Get a large coffee plus two donuts for $4, two small kolaches for $6 or two breakfast tacos for $8.

Other options include donut holes for just 29 cents and glazed, iced and filled donuts starting at 99 cents and $1.19 each. Larger delights include eclairs, apple fritters, cinnamon rolls and a seven-inch-diameter Texas Sized Donut (these can be customized with a personal message or business name, too). There are also breakfast sandwiches, kolaches and breakfast tacos, plus weekly and holiday specials. Follow on social media for details. Everything on the menu is available by the half- or full dozen, and there is also a large selection of coffee, milk, juices and other beverages. Visit for dine-in, takeout or order via third party delivery services such as ​​UberEats, Doordash and Grubhub.

The Box Bakery and Kitchen, 1130 Broadway: This cheerful, retro bakery incorporates locally sourced ingredients whenever possible and even smokes its own meat in house. Visit for breakfast and choose from a curated selection of indulgent morning essentials, most of which cost $8 or less. There are breakfast sandwiches available on regular or keto-friendly bread with egg, cheese and a choice of ham, bacon, sausage, smoked brisket or smoked pulled pork.  You’ll also find tacos made on housemade tortillas and bowls that include the same fillings as sandwiches and tacos, plus potato or chorizo.

Biscuits are available two ways: as a sandwich or with cream gravy and eggs. The most expensive item on the menu is the Breakfast Platter, which costs up to $10.50, and includes two tortillas and either smoked brisket, smoked pulled pork, potato, chorizo and bacon or breakfast sausage with potato and charro refried beans. Upgrade your meal with à la carte extras such as peppers and onions, hash browns, avocado or salsa.

Serving a crowd? Order a Breakfast Texas Taco Box that comes in three options: regular, mixed and meat lover and cost $47.50, $53 and $61.25, respectively. They include between 1 and 5 each of various tacos, and specifics can be viewed on the online menu.

Busy Bee Cafe, 4009 West Broadway: This classic diner dishes up essential morning fare and serves it all day! Choose from an assortment of egg-based entrées that include Corned Beef Hash & Eggs, Chicken Fried Steak & Eggs and six omelets such as the Spanish with pan sausage, green chiles, onions and cheddar or Philly Steak with mushrooms, onions and Swiss. There are also Loaded Hash Browns served with veggies, cheese and meat; biscuits; bagels; wraps and waffles, too. Plus, there are 13 sides available à la carte like French toast, biscuits and gravy and Our Special Cinnamon Roll.

Visit Monday through Friday from 5 to 9 a.m. for a choice of three specials that cost less than $9 each. All three start with two eggs, and sides include combinations of a hot cake, waffle, hash browns, sausage or bacon.

Donuts Kolaches & Tacos, 6125 Broadway: As the name implies, this one-stop breakfast shop offers a large selection of morning staples — and perks for bulk orders! Popular dishes include the breakfast taco, (available in large or small with a choice of three toppings and up to 10 add-ons), The Grand Croissant Sandwich with scrambled eggs, bacon, ham, mayonnaise and American cheese and the Big Bag Donut Holes that comes with two dozen of these bite-sized snacks.

The donut menu also includes standbys such as apple fritters, glazed, cinnamon twists and a Chocolate Covered Filled Bar Donut stuffed with Bavarian cream. Order donuts and kolaches by the dozen to receive extras: depending on what you order, you can get four or two free items per dozen of your respective purchase.

On the savory front, there are breakfast sandwiches made with croissants or bagels, pancake plates, and classic breakfast plates with eggs, meats and potatoes.

Lila’s Restaurant, 2704 South Main: Start your day with a savory feast at this local mainstay for Tex-Mex cuisine. Everything on the morning menu is under $10, and many selections come in at less than $7. Tacos cost from $1.99 to $2.99 each, with eight egg-based combinations such as fajita, bacon, chorizo, nopal and potatoes. Add extra cheese or meats for 50 cents each.

Heartier favorites include Mexican Migas, which are fried corn tortillas mixed with eggs, onions, tomatoes and jalapeños alongside beans and potatoes, and huevos rancheros made with two eggs drenched in salsa ranchera. Can’t decide on your sauce? Go for the Huevos Celosos that comes with both red and green sauce for a delicious flavor contrast. There is also a selection of omelets, pancakes, waffles and oatmeal.

Peña’s Donut Heaven & Grill, 11601 Shadow Creek Parkway: This family-owned kitchen is popular for its broad selection of donuts and baked goods — in varieties such as cinnamon sugar, glazed chocolate, maple rolls, fruit and cream-filled — as well as cinnamon rolls and muffins. There are plenty of savory selections, too. The Pena’s Classic includes two eggs, a choice of meat, a choice of country potatoes, hash browns or grits and two sweet cream pancakes. Breakfast sandwiches come with a choice of toast, croissant, bagel, biscuit or English muffin plus egg, cheese and either ham, sausage or bacon. Big appetites are no match for the Ultimate Southern Chicken Biscuit loaded with marinated deep-fried chicken breast, an over-medium egg, bacon, cheddar and gravy or the Meaty Trio stuffed with a fried egg, ham, bacon, sausage and cheese.

The Build Your Breakfast section includes an extensive list of ingredients, which are available in a taco, burrito or bowl. Choose from veggies and proteins like chorizo, eggs, refried beans, mushrooms, spinach, brisket and barbacoa. For something a bit different, try the Texas Brisket Donut made with smoked chopped brisket, onions and pickles tucked into a soft glazed donut or the Peña’s Donut Sandwich with egg, sausage and American cheese.

Taqueria Mi Pueblito, 9607 Broadway: The morning menu at this popular Mexican restaurant is straightforward, which can be just the ticket for a busy morning. Breakfast plates come with beans and potatoes, with selections such as pork chop with egg and ranchera sauce, pancakes, huevos divorciados that come with red and green sauce, and nine styles of scrambled eggs mixed with assorted add-ins like chorizo, chicharrones (pork rinds), potatoes or bacon.

The Desayuno Special comes with a choice of beef or chicken fajita, chilaquiles with green or red sauce, two eggs, potatoes and beans. Breakfast tacos are available with a choice of corn or flour tortilla and come in standard combinations like eggs with bacon and eggs with dried beef. Burritos and gorditas include similar fillings.

Cleo Lounge, 9603 Broadway: If an elegant brunch is on your weekend to-do list, look no further than this chic destination that features modern takes on classic favorites. Sweet selections include Challah Bananas Foster French Toast with Candied Pecans & Bourbon Caramel served with a choice of pork sausage or bacon. Looking for something that mixes sweet and savory? Try the Mini Monte Cristo made with shaved Black Forest ham, honey roasted turkey, hickory smoked bacon and Swiss cheese tucked into a sweet crepe and tempura fried until toasty, then finished with berry compote and powdered sugar.

The Greasy Spoon Soulfood Bistro, 1009 Broadway: Spice up your weekend at this hip bistro popular for its full-flavored brunch. It is served Saturday and Sunday from 11 a.m. to 4 p.m.  The menu is separated into two sections: “Waffles & Co.” and “Grits & Co.” The former includes a choice of Cajun Fried Chicken or Cajun Fried Catfish & Waffles served with fluffy mini waffles, powdered sugar, housemade syrup and a strawberry waffle garnish. The Lamb Chops & Waffle includes three herb and rosemary or jerk-seasoned grilled lamb chops with the same garnishes as above.

You can also check out the Pearland Convention & Visitors Bureau on social media for the latest updates. Follow on Facebook, Instagram and Twitter. There is even a YouTube channel with videos that take you right to the people and places that make Pearland a great food and drink destination!