Where to Find Chiles en Nogada in Houston, Mexico’s Most Patriotic Dish 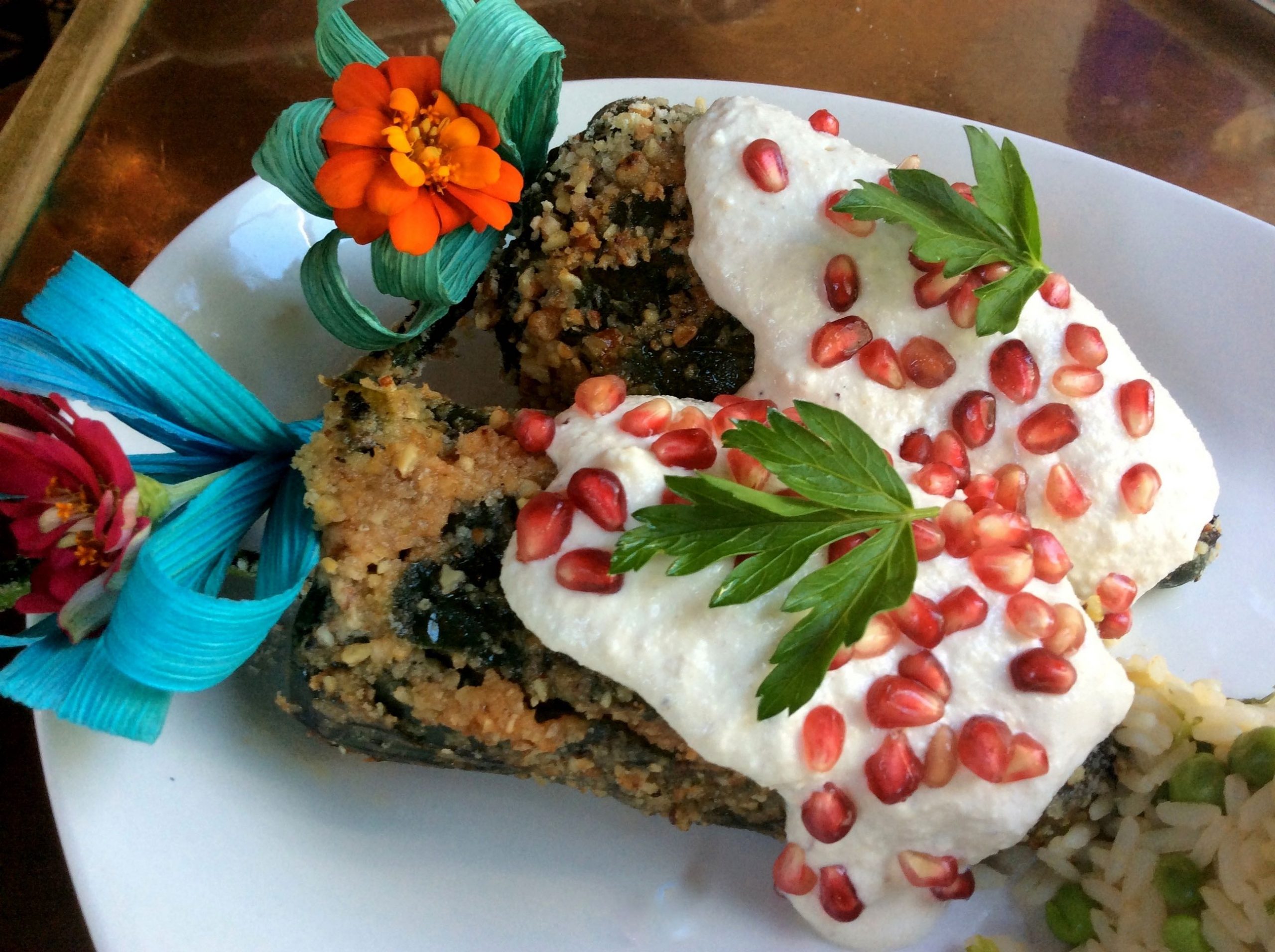 Mexican Independence Day is one of the biggest celebrations in Mexico. Every year from September 15 to 16 in towns across the country, bells ring out at 11 p.m. as excited crowds watch the reenactment of “El Grito de la Independencia” — the Cry of Dolores — that Father Hidalgo shouted to citizens of Dolores, Mexico in 1810, beginning of Mexico’s 11-year struggle for independence from Spain. In Mexico City, the President rings the original Liberty Bell then recites a speech. After the grite — the cry — the national anthem is sung, followed by fireworks, patriotic speeches, parades and revelry. Mariachi music and cries of “Viva Mexico” continue through the night and the following day. The red, white and green of the Mexican flag can be seen on buildings, people and food, including the most patriotic dish in Mexico: the Chiles en Nogada.

Legend has it that after the war was won in 1821, Agustín de Iturbide, the victorious general, arrived at the Convent of Santa Mónica in Puebla, home to the Clarissa nuns of the Order of Augustinian Recollects. It was August 28, the same day as the feast of Saint Augustine. De Iturbide was presented with a expansive meal, but nearly refused to eat for fear of being poisoned by his enemies. However, he could not refuse a dish, presented in the colors of the Mexican flag. It embraced the seasonal bounty of the region; a roasted poblano pepper, stuffed with picadillo — a mixture of meats, nuts and fruits. The stuffed pepper was coated with a creamy white walnut-based sauce (nogada) and then topped with pomegranate seeds. Modern renditions are sometimes also topped with cilantro and pine nuts.

According to lore, Iturbide cleaned his plate and made the dish famous. It’s still beloved to this day. The town of San Andrés Calpan hosts an annual competition called the Feria del Chile en Nogada to determine who makes the best chiles en nogada. Nearby, poblano farmers like to also grow the traditional and rare fruits that are used in the dish.

There are several restaurants in the Greater Houston area where diners can enjoy Chiles en Nogada. Some put a unique spin on the dish, while others are more traditional. Read on to find out when and where to go, and note that most restaurants only offer this seasonal dish for a limited time.

Ambriza Social Mexican Kitchen, multiple locations: This restaurant with locations in Vintage Park, La Centerra and Towne Lake is offering a traditional version of the dish. Made with a meat-stuffed poblano pepper bathed in the walnut cream sauce known as nogada and garnished with pomegranate seeds, it’s available until further notice. Look for lesser known dishes such as Ceviche Costeño, which is whitefish marinated in coconut, serrano and lime, mixed with shaved red onions, cilantro, and served with a side of plantain chips; or the Pastel Azteca, made by layers of lightly fried tortillas and pulled chicken with poblano sauce, sour cream, Menonita cheese and rajas poblanos.

Arnaldo Richards’ Picos, 3601 Kirby: Chef and owner Arnaldo Richards, who was raised in Monterrey, Mexico before moving to Houston to attend the Hilton School of Hotel and Restaurant Management, pulls influences from all the regions of Mexico for his diverse menu. His Chiles en Nogada Tradicionales is stuffed with pulled pork in a peanut sauce with olives, almonds, raisins and fruits and covered with a creamy walnut sauce and pomegranate seeds. Picos is one of the few restaurants in Houston that serve the dish all year.

Other dishes gleaned from the bounty of Mexico include the Pescado Veracruzana: the catch of the day broiled and topped with Veracruz Sauce (tomatoes, green olives, capers and chiles güeros). From the state of Sinaloa comes Agua Chile de Camaron, marinated shrimp in a spicy garlic, lime juice. Moles and pipiáns are abundant on the menu as well, including Mancha Manteles (which translates as “table-cloth stainer” because it is so dark), pork and chicken with an Oaxacan-style peanut and chile ancho mole, or Duck Two Ways, which has spent time on favorite dishes in Houston lists, features a duck breast in green pipián sauce and duck hindquarter in mole de ciruela.

Caffe di Fioré, 1010 Woodlands Parkway: Looking for Chiles en Nogada in The Woodlands? This restaurant has been a mainstay since 2009, and it’s bringing back this seasonal dish. During the rest of the year, you can find beloved classics such as carne asada, tacos al carbon and the customer-favorite Mole Enchiladas, which is made with chicken, cheese, cream, sesame seeds and mole sauce. For a twist, try the Fried Avocados stuffed with beef or chicken or Grilled Salmon with Signature Creamy Lime Sauce.

Caracol, 2200 Post Oak Boulevard, and Hugo’s, 1600 Westheimer: Chiles en Nogada will be available through December at both of these H Town Restaurant Group establishments, where you will always find authentic Mexican dishes in an elegant setting. Chef Hugo Ortega’s stuffing for Chiles en Nogada is made with shredded pork mixed, red and green apples, pears, peaches, plantains, sweet potatoes, almonds and raisins. The stuffed pepper is then blanketed with savory walnut cream sauce and garnished with pomegranate seeds and parsley.

Coastal Mexican dishes that can be enjoyed at Caracol year-round include Langosta Puerto Nuevo, fire roasted lobster with playa la ropa beans and arroz Mexicano. For those who want some turf with their surf, Cañita de Puerco is a slow-braised bacon-wrapped pork shank with mole costeño (a coastal mole made with costeño peppers), Swiss chard, and carrots. The meatless Tamal Azteca con Hongos Y Huitlacoche is a stacked tortilla casserole topped with mushrooms, corn truffles and roasted tomato sauce.

Cuchara, 214 Fairview: Co-owner Ana Beaven goes above and beyond with her Chiles en Nogada. It’s her favorite dish, and she takes a lot of pride in serving it just like her grandma who, as a teenager, was taught by the Clarisas nuns (known elsewhere as the Poor Clare Nuns) in their convent in Puebla. Cuchara’s version is served in a traditional Talavera clay plate, and the kitchen staff numbers each chile. Ingredients for the dish are sourced from Mexico. This is the last year they will serve it with acitrón, a sweet, dried fruit from the biznaga cactus, as it’s on the extinction watch list in Mexico. When its short supply of acitrón runs out, Cuchara will substitute candied pineapple from Oaxaca. Year-round, that level of attention is seen in other dishes, such as the Hidalgo-style lamb barbacoa and Tamal Costeño, a pork or chicken tamal with red salsa and hoja santa that is steamed in banana leaves.

Fonda Santa Rosa, 9908 Beechnut: The owners of this laid-back establishment for regional Mexican cuisine took inspiration for the restaurant’s menu from Chiles en Nogada. Their stuffing is made with a variety of nuts and fruits. The garnish of pomegranate seeds, pine nuts and cilantro is arranged to resemble the Mexican flag. Similarly handcrafted dishes, such as Enchiladas Tricolor with three chicken enchiladas — one with red sauce,  one with green sauce, and the last with mole — are available year round. So is Molcajete Mixto, a signature combination of tender Angus beef, chicken fajitas and chorizo in a spicy morita pepper sauce served with tender nopales, Panela cheese, Mexican onions and cilantro. Save room for the Pastel de Tres Leches, or vanilla cake in three milks.

Mandi Cocina Mexicana, 24179 State Highway 249, Tomball: Fans of traditional Mexican fare in Tomball have a source for Chiles en Nogada this autumn. Unlike some places, Mandi Cochina won’t start serving its version of Chiles en Nogada until October. Until then, you can enjoy dishes like Enchiladas Potosinas, crispy house-made tortillas flavored with guajillo peppers folded over cotija cheese and topped with sour cream or Enmoladas, pulled chicken enchiladas in Puebla-style mole, topped with sour cream, red onion and avocado.

Tacodeli, 1902 Washington: For the elbows-on-the-table interpretation, try the Chile en Nogada Tacos available at this “farm to taco” spot until October 15. Created by co-owner Roberto Espinosa, the Chile en Nogada Tacos are made with roasted Anaheim chiles stuffed with HeartBrand Beef (from Harwood, Texas) Akaushi picadillo, pomegranate seeds, walnuts and cilantro. The tacos are then topped with a goat cheese sauce made with Cheesemakers chèvre from Cleveland, Texas. The holiday has great meaning to Espinosa who stated in a press release, “Our menu is deeply rooted in Mexican culinary traditions. With Mexican Independence Day being part of our brand history, we set out to create a unique taco in celebration of our heritage.” Guests can also try the Frontera Fundido Chicken Tacos made with grilled chicken breast, jack cheese glazed and sautéed poblano-onion rajas and everyone’s favorite, Esquites, a cup of Mexican street corn mixed with diced red onion, queso fresco, cilantro and bacon bits.