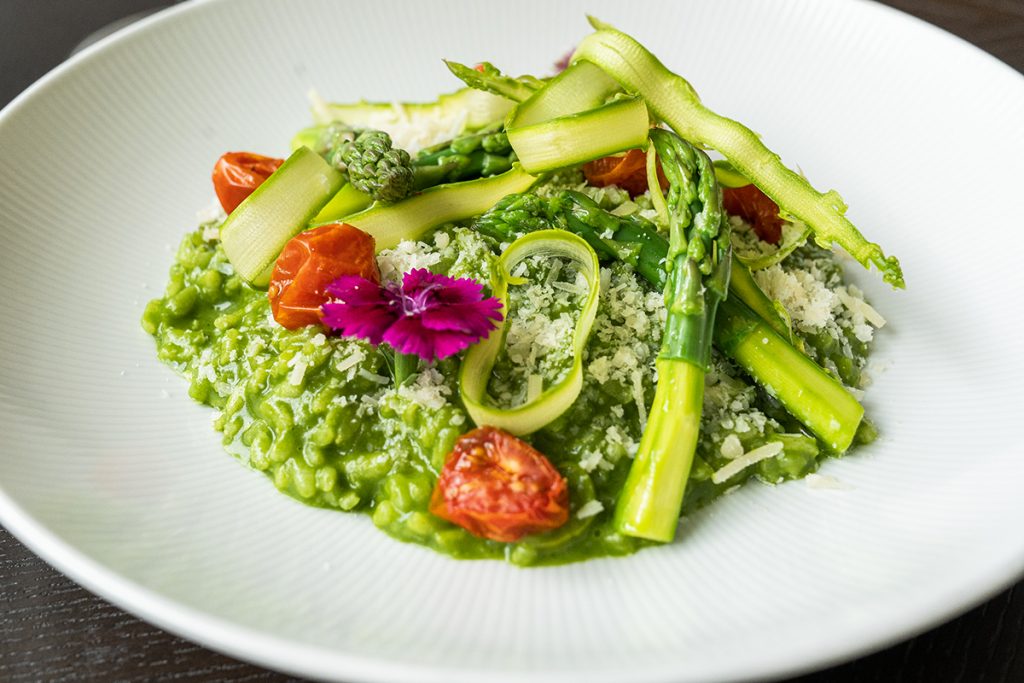 The area around the Texas Medical Center isn’t known for its dining scene. Unless you work there or are visiting for medical care, it’s hard to imagine going to that neighborhood explicitly to dine. However, there are signs that this is changing  —  upscale bakery Common Bond recently opened a location in the area, for example. As far as “nice” dining goes though, Third Coast has really been the solid mainstay — but now it has some competition in that category. Safina, which opened earlier this year in the InterContinental Hotel at 6750 Main, is a new option that is well worth a visit. (Plus, it is just down the rail line from the zoo and museum district, which means you can avoid valet or garage parking while enjoying a post-excursion meal. However, guests who drive there can get the first two hours of garage parking validated. After that, a $22 daily parking rate kicks in, so keep an eye on the time.)

Though Safina, like so many new Houston restaurants over the past two years, is billed as “Mediterranean” — now a watered-down descriptor capitalizing on the healthy reputation of the regions’ cuisines — the overall finesse and beauty of the restaurant and its dishes transcends the cliché.

Incandescent with the colors of the sea — blue, orange and green — Safina is the most attractive spot in the hotel, an open space that is brightened, especially during the day, by a wall of floor-to-ceiling windows. The allure of the dishes is thanks to chef de cuisine, Tiago Almeida. Originally from Portugal, he honed his skills for 11 years while cooking at the Four Seasons both there and in Houston. Recently, I was invited in to try his work — and it’s a good thing I was, because I seriously doubt I’d have visited Safina on my own. I don’t go hunting for good food in the Medical Center. In fact, I avoid that area like the plague (so to speak).

There are dishes that are tasty, and then there are dishes that are pretty. Sometimes the two don’t meet, but one mark of a chef’s skills is merging those traits. Almeida does that perfectly at Safina. Every dish has a vibrancy that, intentional or not, matches the snaps of color that highlight the space. Just one example is the green and orange of the Arugula & Citrus Salad, which takes advantage of prime citrus season by offering accents of orange and grapefruit supremes, while balancing the peppery arugula with the classic, cool-weather flavors of pomegranate vinaigrette.

Another appealing dish is the Asparagus Risotto, which uses proper Arborio rice. The verdant stalks are presented three ways: shaved into paper-thin strips, trimmed spears and pieces blended into the rice. Almeida also adds a little spinach to the mix to naturally increase the intensity of the hue. A smattering of oven-dried cherry tomatoes and real Parmigiano-Reggiano rounds out the dish with a final touch of sharp, salty textures.

The Shrimp Provençal is a lush yet simple treat that showcases excellent Gulf shrimp, sourced from local fishmonger Blue Horizon Seafood. Hints of garlic, red chili flakes, white wine, fragrant cilantro and a zesty pop of lemon accentuated the subtle shellfish, while char-grilled bread seasoned with freshly ground black pepper rode alongside — a considerate touch for those who want to swipe up the remnants of the spiced oil (and really, why wouldn’t you?).

The wine selection is small but well-chosen. There is something ideal for every dish. A crisp 2018 Domaine Bonnard Sauvignon Blanc from Sancerre in Loire Valley leaned more on minerality than grassy notes, making it a perfect companion for buttery seafood dishes such as the shrimp. For reds, Domaine Rouge-Bleu Mistral, a traditional Rhône blend of Grenache and Syrah (along with a little Mourvèdre and Roussanne) or a Ricossa Antica Casa Barbaresco from Piedmont are excellent choices for Safina’s red-meat selections: Steak Frites featuring hanger steak and topped with a sunny-side-up egg; lamb chops with za’atar, mint yogurt and tabbouleh; and Beef Grenadine with sirloin medallions, house-cured bacon, roasted potato, haricots verts and wild mushroom sauce.

As for prices, Safina’s are modest for a hotel restaurant, where too often diners are treated like a captive audience. The salad was $10, the shrimp $18 and the Beef Grenadine is a reasonable $30. Portions are on the smaller side, so you may want to order two small dishes to go with your main. Add a glass of wine and your bill will be about $50. That’s pretty much the going rate at any nice restaurant in Montrose, The Heights, or nearby Rice Village.