Under the Radar: Ambrosia Is A Hideaway With Great Pan-Asian Fare 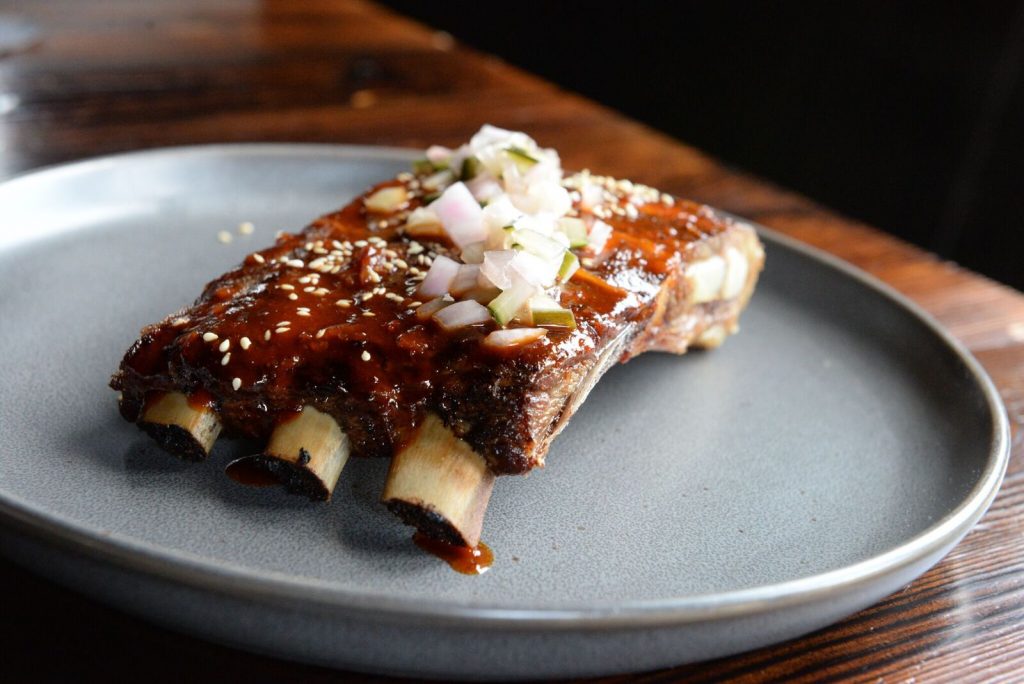 Ambrosia's Gangnam Ribs are a sticky, sassy appetizer, easily shared — or not. Photo by Dragana Harris.

If you weren’t looking for Ambrosia, you almost wouldn’t know it was there. The Upper Kirby restaurant is tucked into a palm tree-laden block at 2003 Lexington just off bustling Shepherd Drive. Pulling into the parking lot feels like heading into a secret hideaway. The walk across the cool, shady, walled-in patio, with wide terracotta tiles, tropical plants and enormous wrought-iron accents, reinforces that feeling. Diners who are well-aware of the restaurant’s “hidden gem” status come for the pan-Asian cuisine and easy atmosphere.

A representative of Ambrosia invited Houston Food Finder to visit and try some of its offerings. We were pleasantly surprised by what we discovered—and pleased to join the ranks of diners who have experienced its charms.

Ambrosia first opened in 2012. It’s had a devoted following ever since. Two of those fans were Peter and Tien Tran, who took over the space from its former owners six months after its launch.

Micah Rideout is Ambrosia’s concept chef — and if that name sounds familiar, it’s because just over the past few years, he helped open restaurant and club Tarakaan (now closed) before heading to KUU and, more recently, Potente. The executive chef is Andy Hodson, a Houston native who decided on cooking as a second career after being a professional golf teacher for 20 years. Hodson is also chef and owner of Third Coast Grill in Missouri City and was formerly the head chef and kitchen manager at Hungry’s. Hodson was recently hired to run daily kitchen operations and execute Rideout’s new menu.

The Tran brothers — first-generation Americans raised by Vietnamese parents who fled to Houston after the fall of Saigon — and their team have created something unique among Houston restaurants. Sure, there are other Asian fusion spots. Yes, there are other lovely spaces. There are hip spots, casual places, bars with great food and restaurants with great bars. Ambrosia, almost impossibly, manages to be all of the above.

One example of the great dishes, the Gangnam Ribs, are twice-cooked and slathered with sambal chipotle Gojuchang glaze. These arrive at the table fall-off-the-bone tender and laced with a smoky heat. Listed on the menu section labeled “Snacks,” the ribs are easily shareable but so tasty that diners may tell their companions to order their own. There are lamb, chicken and vegetarian samosas, too, which can be mixed or matched. The overstuffed, fried pockets— well-known, Indian street food classics — are great options for those looking for small bites or a little something to accompany a cocktail or glass of wine.

Ambrosia’s fusion concept was developed by former chef Rikesh Patel. The Tran brothers say the menu, influenced both by pan-Asian flavors and techniques as well as Texas ingredients, was perfectly suited for them.

“It fits with our Vietnamese background, but we’ve also become very assimilated,” explained Tien via a press release. “We’re kind of living the American dream, so it makes sense.”

For evidence of that East-meets-West blending, look no further than the Szechuan Ribeye. It’s 16 ounces and arrives on a massive cutting board accompanied by Umami Potatoes, so named for the fifth sense of taste (added in recent years to the known perceptions of salty, sweet, sour and bitter). With savoriness similar to soy sauce, the side dish is an excellent foil for the steak’s zesty red chili sauce.

Meanwhile, the waloo (butterfish) is rich and firm, the fish’s natural creaminess rolling around in your mouth. Its simple preparation has just a hint of sesame and soy, and the puffed rice it’s partnered with is a great canvas for the fish’s big flavor.

There are also Masala Lamb Lollipops, done tandoori-style with pops of ginger, and Tamarind Salmon with a “pad thai glaze” that’s enhanced by chili yogurt.

For dessert, one worthy selection is a delightfully decadent chocolate pot de creme, milky and deep, topped with a basil crumble that makes for a surprisingly great combination.

During Happy Hour, check out the $5 Wasabi Pork Dumplings served with ponzu sauce and pair them with one of the $7 featured wines or an $8 cocktail.

With its welcoming spirit and menu of shareable dishes, Ambrosia is a solid option for everything from date night to a party that celebrates a work promotion.