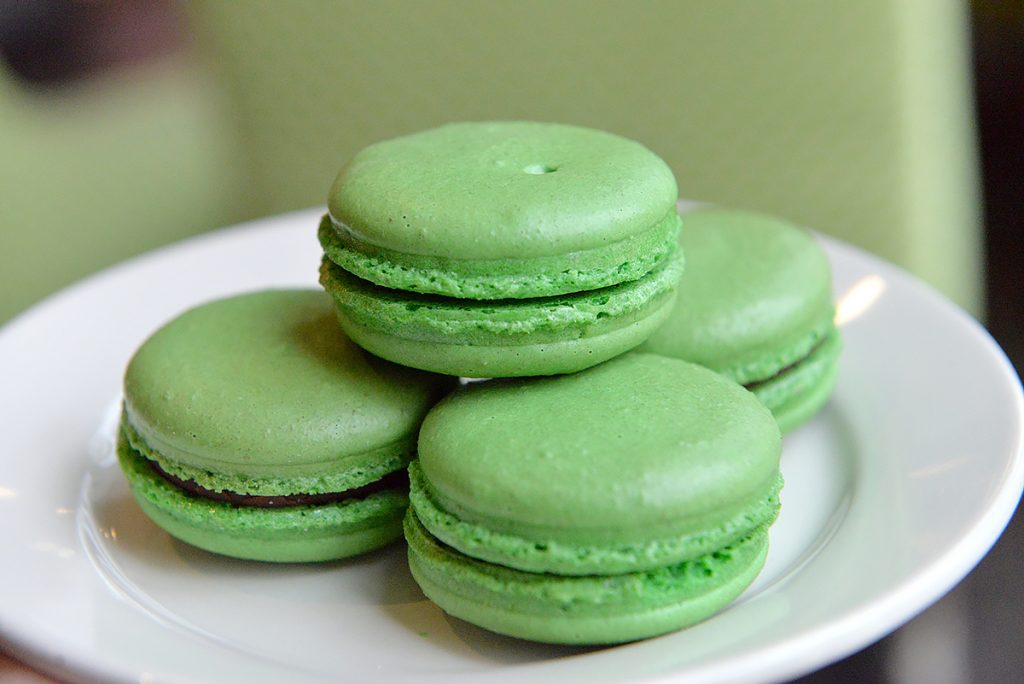 Thin Mint macarons are available in March 2019 or afterward by special order. Photo by Dragana Harris.

For years, chef Vanessa O’Donnell of Ooh La La has taken inspiration from nostalgic desserts, cereals and more for her pastries. For March 2019, she may have outdone herself. All three of her Ooh La La locations are selling Thin Mint Macarons and Pop Tart Cupcakes, in addition to pop culture-inspired treats that are always on the menu (and in the beautifully staged display cases), such as S‘more Cupcakes and Rice Krispie Treat Cookies.

The Pop Tart cupcake is a fluffy vanilla cake filled with fresh strawberry puree and topped with strawberry buttercream and a piece of frosted strawberry Pop-Tart. It costs $3.75 for one and $39.95 for a dozen. The Thin Mint Macaron has a bright green crème de menthe shell and fudgy chocolate ganache filling. It’s one of two Girl Scout cookie-inspired macarons. The other is the Caramel Delight Macaron, made with a milk chocolate shell filled with homemade coconut-caramel filling and then finished with a chocolate drizzle. One macaron costs $2.25 and a dozen is $27.

O’Donnell first took inspiration from a popular brand when Hostess went out of business in 2012. (It was later acquired and revived by different investors because there’s no way we can be without Twinkies.) “We made an “upgraded” Hostess-style cupcake that was very popular,” said O’Donnell, noting that the dessert was especially popular as a Valentine’s special.

With O’Donnell’s ability to turn mass market goodies into custom fancy desserts, it begs the question: what makes for a good macaron, cupcake or some other dessert? Were Thin Mint cupcakes or a Pop Tart macaroons possibilities? “There is really no rhyme or reason unless one really works better as a cupcake as opposed to a macaron or vice versa,” she said. “Often times, if the flavor really sells well, we will try it in another dessert a few months later.”

After March, the Girl Scout Cookie-themed macarons and Pop Tart Cupcakes won’t be readily available, but O’Donnell says Ooh La La can take special orders for them any time of year. Also available by pre-order are Oreo, Reese’s and Snickers mousse pies for $58.95 each. That is costly, but the ingredients are rather intense and time-consuming. For example, the Reese’s pie has a chocolate cookie crust, dense peanut butter mousse and a chocolate ganache lid. It’s then topped with peanut butter whip and Reese’s Peanut Butter Cups.

Ooh La La is at 23920 Westheimer Parkway and 20155 Park Row in Katy and also has a Houston location at 770 West Sam Houston Parkway North in Town & Country Village. Other details are available on the website.