The Hit List: New Houston Restaurants to Visit in April 2021 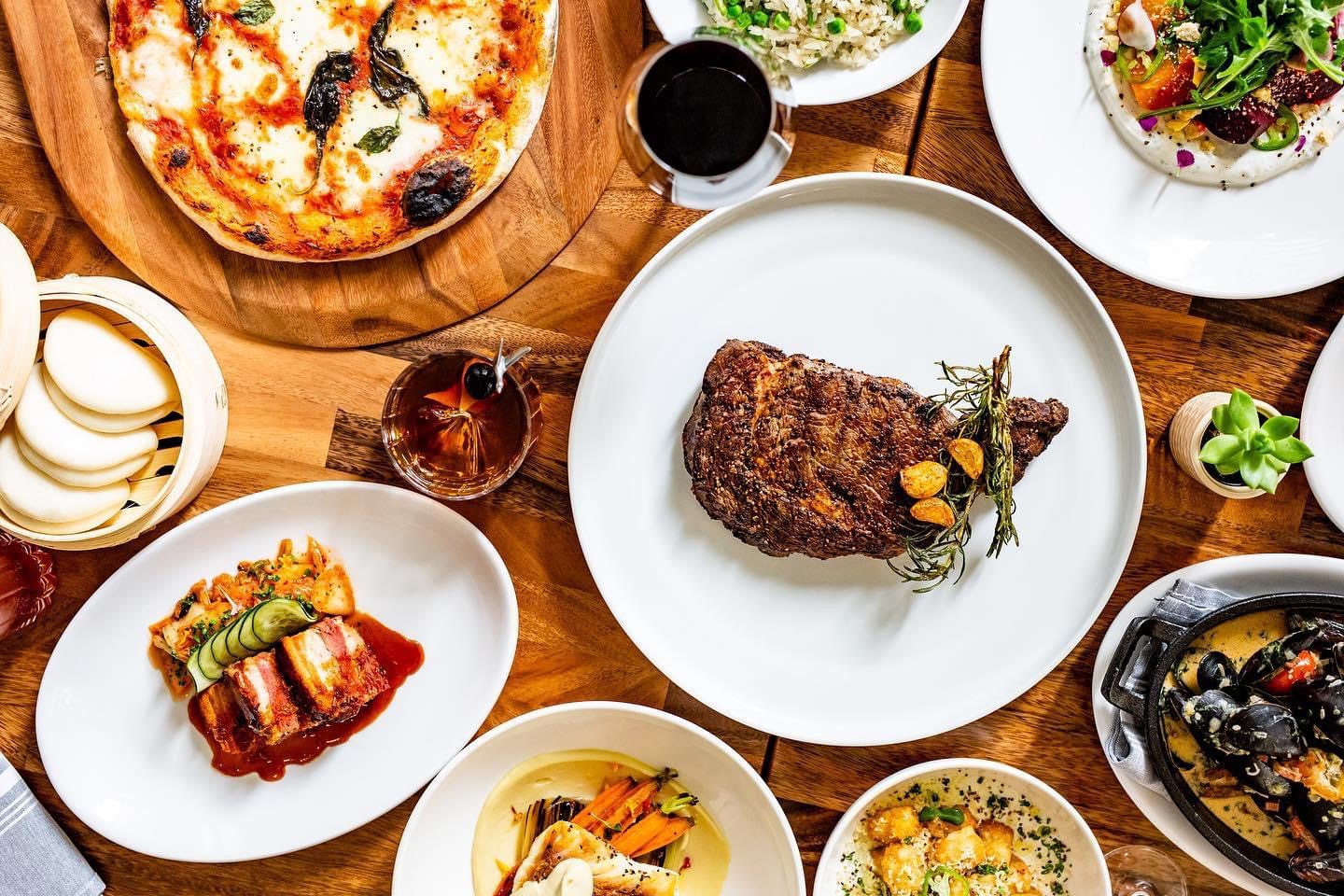 Just a few of the tasty dishes at The Nash. Photo by Kirsten Gilliam.

After a year of few new restaurants in Houston due to pandemic-driven complications and restrictions, the pace of openings is getting back to normal — and “normal” means, “Don’t blink, or you’ll miss something.” This edition of the Hit List not only includes recent openings such as YELO and KP’s Kitchen, but also catches up on a few places that opened late last year, like 93′ Til and Tiny Champions. Readers who shied away from dining in 2020 will find there are many worthy new experiences to be had — and more to come as the dining scene revs up again.

If you are looking for more new Houston-area restaurants to try, check out our other 2021 monthly hit lists: May, June and July.

93′ Til, 1601 West Main:  Housed inside the former Night Heron (and previous to that, Lowbrow) space, 93′ Til blends music, light bites and a few main courses with ample options for indoor and outdoor seating. Owners, chefs and California natives Gary Ly and Lung Ly (no relation) got their inspiration for the name from a local band in Oakland.

A few must-try dishes on the current menu include Potato Chip Gnocchi with buttermilk soubise (a French white sauce made with onion purée), crispy potatoes, chives and Parmesan; Chicken Liver Mousse with fennel marmalade and smoked trout roe served with toast and the Branzino entré with sauce vierge (another French sauce commonly made with olive oil, lemon juice, chopped tomato and chopped basil) and asparagus relish.

Degust/Diversión, 7202 Long Point: Chef Brandon Silva and bar director Steven Salazar of The Kirby Group (which owns Wooster’s Garden and Holman Draft Hall) opened tasting-menu restaurant Degust and neighboring bar Diversión in mid-January. Each concept is poised as a destination spot, with Diversión offering a rotating cocktail list and Degust drawing influences from Spanish, Mexican and Southern cuisines using Japanese culinary techniques. The result is quite interesting. The current menu has two options: the Green Pill for vegetarians and Purple Pill for meat lovers. Both menus have recurring items such as Meyer Lemon Nori, with Horseradish and Meyer Lemon Aperitif and Kohlrabi with peas and carrots. Diners can add upgrades to the meal, too, including Ossetra Caviar, bluefin tuna, fresh black truffles and foie gras. Reservations are strongly recommended.

Fegen’s, 1050 Studewood: Lance Fegen and his restaurant group, F.E.E.D. TX, have converted the former Liberty Kitchen & Oyster into the chef’s first self-titled restaurant. Fegen’s is serving Southern-Italian fare that also count as familiar American favorites. Hot plates include The Meatball with tomato gravy, pecorino and crusted bread and the Linguine & Clam Sauce in red or white. Sicilian pizza is also on the menu with familiar staples such as the Margherita and signature combinations like Purple Rain with fried eggplant, fresh ricotta, tomato gravy, basil and Sicilian olive oil. Those looking for meatier fare can choose from a selection of steaks, chicken or a love-it-or-hate-it dish: calf liver and onions. On the bar side,  Nicole Meza, whose experience includes formerly of Weights + Measures and Julep has curated a cocktail list of classics such as the Sazerac and new concoctions like the Staycation with bourbon, lemon juice, passion fruit and grapefruit bitters.

KP’s Kitchen, 700 Town & Country Boulevard: Kerry Pauly has worked for years with veteran Houston restaurateur Benjy Levit of Local Foods, The Classic (closed) and the former Benjy’s (now another Local Foods location). Now, Pauly has a restaurant of his own. KP’s Kitchen is in the former Smashburger location at the Town & Country Village shopping center. The neighborhood bistro serves American classics such as the KP Burger, featuring freshly ground beef, smoked bacon and American cheese with housemade fries alongside, and entrées like the 12-Hour Baby Back Ribs with chili-citrus glaze. Currently, KP’s is BYOB, and there’s even a recommendation section on the menu to help pair your food with the beer or wine you brought along.

Littlefoot, 1302 Nance: Time is running out to enjoy this special pop-up at Theodore Rex featuring chef de cuisine and James Beard Award-nominated Rising Star chef Kaitlin Steets. The menu is a five-course tour de force with two menu choices: the Degustation Menu featuring vegetables, fish and meat, and the Vegetable Menu. Both rely on Texas-produced ingredients. A few selected dishes from each menu to get excited about: Cylindra Beets with braised green fondant, garlic and capers, Bouillie de Farro with farro verde and onion brulée and Creme Pâtissiere flavored with Sauternes.

The reservations for the final days of Littlefoot are likely to be snapped up quickly, so act now if you want to attend. For those who have missed James Beard Award-winning chef Yu’s menu for Theodore Rex: the restaurant officially returns on May 20.

March, 1624 Westheimer: There’s long been one final business planned for Goodnight Hospitality’s corner of businesses at the intersection of Kuester and Westheimer — and it debuted on the last day of its namesake month. March finally opened alongside Rosie Cannonball and Montrose Cheese & Wine after giving diners a taste of what to expect through as pop-up lounge in 2020. Now fully open as as chef/co-owner Felipe Riccio’s tasting-menu restaurant, March’s initial menu focuses on the Barbary Coast through dishes such as Tuna Ventresca and Fifth Quarter Tagine — a take on the Moroccan slow-cooked, savory stew.

Thanks to general manager/sommelier Mark Sayre’s thoroughly developed wine cellar, there are over 11,000 bottles from which to choose. These hails from around the globe, and March especially focuses on small, independent producers. The cocktail program from Alex Negranza (formerly of Tongue-Cut Sparrow and Anvil Bar & Refuge) features unique, complex cocktails with deceptively simple names like artichoke, made with calvados, cinnamon, fig and orgeat, and thyme, which combines tequila with vermouth, bitters and celery.

The Nash, 1111 Rusk: This downtown restaurant located inside the Texaco building opened earlier this year. It boasts an impressive, dog-friendly outdoor space, floor-to-ceiling bar and an open kitchen centered around a wood-fired pizza oven. Chef Omar Pereney, best known locally for his work as executive chef of now-closed Peska when he was a mere 21 years old, developed The Nash’s menu. Offering dinner and happy hour for now (with brunch and lunch slated for the coming weeks as more downtown businesses return to the new normal), some standout snacks and starters include the Forbidden Eggs served crunchy, sweet and spicy with tamarind sweet chili sauce, cilantro, Thai basil, and crispy shallots, and the Korean Bacon Bao with Gochujang bbq sauce, cucumber, pickled onions, peanut, cilantro. The Cauliflower Paneer Curry entrée with peas, jasmine rice, spiced tomato gravy, garlic flatbread is definitely worth a visit.

Tiny Champions, 2617 McKinney: The second endeavor from chef Jason Vaughan and Sean Jensen of Nancy’s Hustle got some early buzz for its pizzas and pastas thanks to the dough making skills of bread-and-pastry chef Julia Doran, but that’s not all the restaurant offers. In addition to the whey-brined fried chicken pictured above, the menu also offers fried mussels with saffron and lemon aioli, and smoky fried mozzarella balls with marinara. Bridget Paliwoda, formerly of Oxheart and The Annie, is handling the wine list, so you know you can’t go wrong there. By the way: Tiny Champions is also making its own desserts, including sesame cake, Chocolate Angostura “Salami” and ice cream, the current flavors of which include Malt with Hazelnut Praline and Toasted Almond. Get a free sprinkling of Maldon salt upon request, or pay $2 for a luxurious topping of Pedro Ximenez sherry, toasted meringue, cold brewed coffee or something else equally divine.

YELO, 23119 Colonial Parkway, Katy: Diners inside the 610 Loop got a brief taste of Yelo while it operated as part of the Phat Eatery ghost kitchen at Blodgett Food Hall. Operational issues and customer service limitations under the host ghost kitchen’s policies made owner Alex Au-Yeung decide it wasn’t going to work out. The good news is that Yelo, under both ownerAu-Yeung and Cuc Lam, who established her reputation with private dinners via ChefsFeed, a pop-up chef and, briefly, as the driving force of short-lived restaurant SING, is now in its permanent home next door to Au-Yeung’s Malaysian restaurant, Phat Eatery. That means the head-turning bánh mì is available every day, including the char siu xiu mai banh mi that Houston Chronicle restaurant critic Alison Cook cited as a favorite dish of 2020. Other items to not sleep on: Lam’s excellent crab rangoon, specialty drinks that include Pandan Iced Latte and freshly pressed juices such as the Green Goddess with celery, cucumber, green apple, pear and lemon.

Correction note: We initially failed to identify the correct wine director for Tiny Champions, Bridget Paliwoda, and apologize for the error. — Ed.

Disclosure: Phat Eatery is a Houston Food Finder sponsor and makes it possible for us to pay our writers and publish informative articles like this one. Interested in helping out? Email us.