Essential Dishes: Where to Eat the Best Houston Burgers 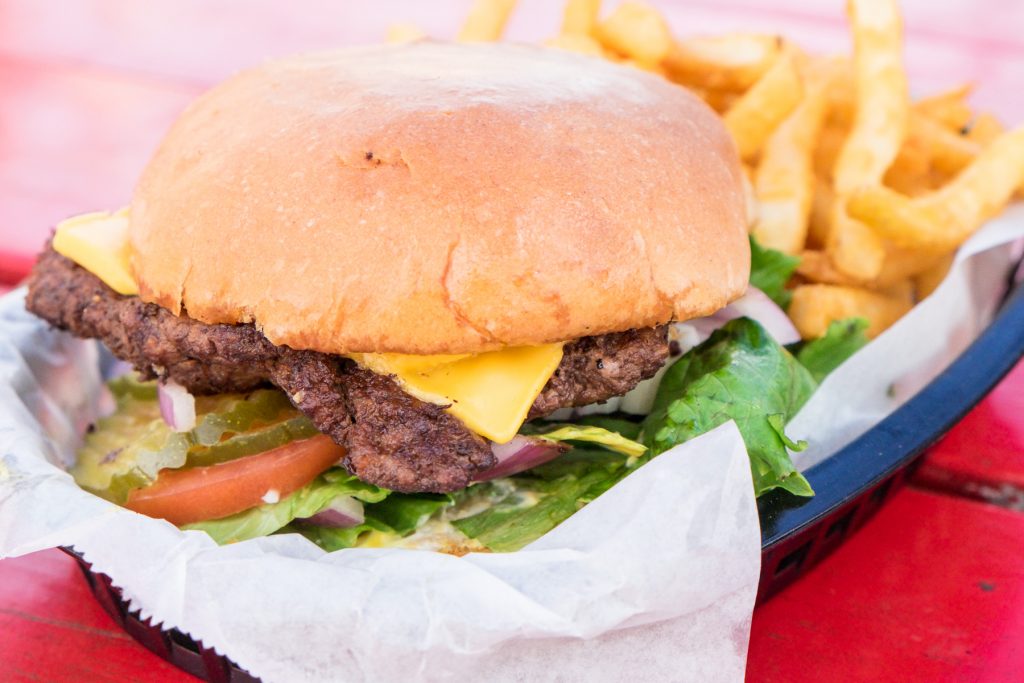 The cheeseburger at Lankford Grocery & Market. Photo by Phaedra Cook.

When it comes to essential Houston dishes, few can compete with the mighty cheeseburger. Really, it’s essential to the very heart and soul of America. Biting into the perfect burger is like playing the Star-Spangled Banner on music festival speakers for your taste buds.

While steaks represent quintessential Texas fine dining, burgers are an everyday indulgence. We eat them on lunch breaks. We grill them on holidays and at tailgates. We are deeply loyal to our favorite spots and critical of anyone trying to sell us an inferior product. Burgers are the foundation of Houston’s food culture, a simple classic upon which a greater diversity of offerings was built. Out-of-town chain operators have clued into Houstonians’ passion for burgers. so there’s been a recent influx of new burger places. Still, dozens of classic H-Town burger joints are still around, grilling up juicy servings of patriotism one patty at a time.

Choosing Houston’s best burger is a laughable task. Some people like thin, crispy-edged patties; others want a thick, juicy burger they can sink their teeth into. Even narrowing a list down to just a handful of suggestions means making some tough choices, but the places mentioned in this article are the must-go essentials. These are the joints that best define the Houston burger experience.

Under a gloomy overpass not far from the Galleria, in a setting about as removed from the Galleria’s posh aesthetic as possible, sits a literal shack that’s been slinging burgers for over 30 years. Though Bubba’s Texas Burger Shack has been in business on Westpark Drive since 1985, the building itself is a transplant from Westheimer. The old shack was once a key shop until the original owner, Bubba Gillam, decided to up and move to Westpark and start selling burgers instead.

The rest is history, and 38 years later the shack still bearing his name sells some of the finest burgers in Houston. Bubba’s is king of the buffalo burger: juicy, handmade patties topped with perfectly melted American cheese and stacked with just the right amount of veggies on a white toasted bun.

The beauty of a Bubba’s burger is in its simplicity. No frills, no mess; just near-perfection on a bun and the right amount of melted cheese on the patty. While it’s known for its buffalo patty, Bubba’s also offers beef for those orthodox burger lovers, as well as veggie burgers and a small menu of other sandwiches.

Though excellent, the buffalo burger at Bubba’s is slightly bested by The Hay Merchant. James Beard Award-winning chef Chris Shepherd’s Cease and Desist Burger (cleverly named after an In-N-Out cease and desist letter over the use of the term “double-double”) is a perfect interpretation of a classic American cheeseburger. Like the other dishes at The Hay Merchant, it is made from scratch. This includes the patty, made from house-ground 44 Farms beef, and the burger’s pièce de résistance, the housemade pickles. It is these perfectly crunchy and salty pickles that distinguish this burger from its mere mortal competition — that and the plentiful, melting cheese that so thoroughly blankets both patties and fills every bite.

Both Bubba’s and Hay Merchant share one thing in common; simplicity. While both burgers are thoughtful, well-crafted and refined, their appeal is in their minimalist approach to the perfect burger.

The same cannot be said of the fare at Midtown’s oldest neighborhood burger shack. Lankford Grocery opened in 1939 after its original owners upgraded their roadside fruit stand to a brick and mortar grocery store. For decades, groceries were the primary business, until burgers took center stage in the late seventies. Since then, Lankford has become a Texas icon and a member of Houston’s restaurant old guard. The family-owned shop has gotten plenty of TV coverage over the years, including a feature on Food Network’s Diners, Drive-Ins and Dives.

Famous for its over-sized, “everything but the kitchen sink” style burgers, the old-school country diner, nestled just outside Houston’s most metropolitan area, serves loaded-up burgers sure to make guests want to head home for a nap. The house specialty is the Firehouse Burger, a huge chuck patty served on buns slathered with Lankford’s signature three-pepper-and-mustard hot sauce. The sandwich was made famous by the Diners, Drive-Ins and Dives segment, but had a loyal local following for years.

While the burgers at Lankford lack a refined approach, this neighborhood dive is a beloved throwback to a lost era: one when Houston didn’t have famous chefs and gourmet burgers.

Back then, “big” and “fresh” were the only adjectives necessary to describe the perfect burger. In this way, Lankford is as essential to the fabric of Houston dining as any James Beard-nominated chef or restaurant.

The burgers of Justin Turner, chef and founder of Bernie’s Burger Bus, exist somewhere in the grey area between the messiness of Lankford Grocery and the simplicity of The Hay Merchant. Turner started with a literal bus-turned-food-truck and grew the business into four storefronts and one of the most popular names in Houston fast-casual dining.

Bernie’s is known for stacked burgers with high-quality ingredients. The secret to Turner’s success is the care put into every burger he or his employees has ever made — that and the creative “schoolyard” theme inspired by the converted school bus originally used to house the restaurant on wheels. Signature burgers include the Principal, the Homeroom and the Substitute with bleu cheese, bacon, burgundy mushrooms and “tipsy” onions.

These four burger establishments join dozens of H-Town originals that fuel diners’ obsession with cheeseburgers. Other contemporaries include Christian’s Tailgate, Hubcap Grill, Buffburger, The Burger Joint and many more.

The burger is a dish that defines working-class America — classic, under-rated and often overlooked. In a town that has long fought to justify both its culinary and cultural appeal, perhaps no dish is more essential.